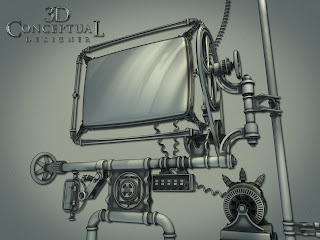 The first concept 3D design I did was this large single monitor CRT design, here it is rendered in ambient material with a dirt pass to exaggerate the cracks and design elements. 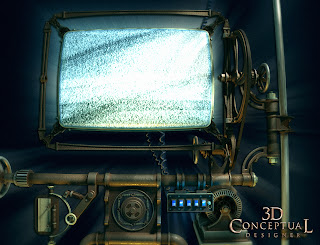 Here is the textured color pass on the above first draft scene. A bunch of the 3D models they sell on TurboSquid are found in here[ Mic,Generator, etc.] 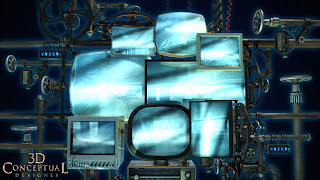 Here I clumped a bunch of various monitors together that would animate to create this menu. All types of video screens are found here. 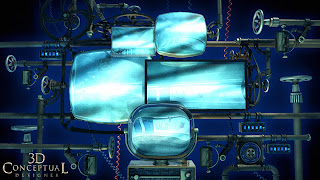 Here is the above scene with a few monitors removed for the Blue RAY Menu. 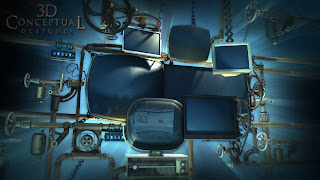 The final design, though not used was rendered at a full 1080p HD size for the final menus and intro aniamtions.

While in-house as a 'One Man Army', running my little 3D department, I did a few projects for them, so they tasked me with the DVD Menus for the yearly reels we would send out to solicit business, and to highlight the accomplishments of the various teams.

I had in the past done quite a few DVD menu assets, animated and stills, for the Home Entertainment department, and an occasional 3D logo, so they had me design out theis menu screen with a Stempunk flair to it with a set of animated video monitors, and old TV's that would show off the companys work.

The project dragged out over they next year, and the assets as far as I know were never used, but as all design work is subject to the cutting room floor, that in no way discounts the great learning curve, and quite frankly the FUN I have doing the work.

I love steampunk, I did a lot of Jules Verne inspired designs since I was a kid as I grew up with Disney s 20,000 leagues Under the Sea, and that was the hot item growing up in the 70's for what is now called, "steampunk". Old TV's and all the hardware is fun to assemble along with the cast iron Victorian era-eaque' frames and wheels.

I learned early on, NOT to care if it finishes, enjoy the process the creation you made, as I know that the decision process in almost NEVER based on a good idea or art execution, but the temperment of the cilent that particular hour of the day, or even minute by minute[ just wait a minute they will change their mind again!].

Advertising is all about the clients EGO's, so for the young designers with wild eyes out there it is a wake up call, as to what they say in Design School, and as with all of life, some can deal with this sad truth, and some not.


Cheers, THOM
Posted by 3Dconceptualdesigner at 11:13 AM