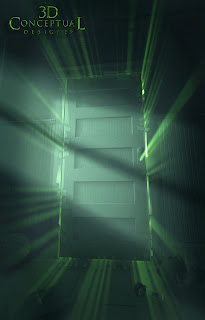 A re-post of the final 3D illustration that I gave over to Calvin to finish out for The Fog. 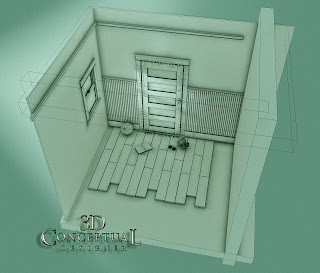 An overhead view of the virtual set I built for the shot. the non seen walls are just boxes to block out the light[ I hid the back wall and ceiling see wires] 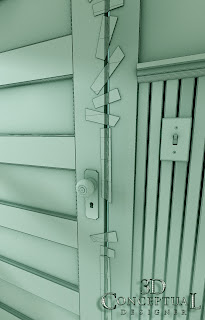 A close up of the details in the panel door made from routered parts, as well as the bead board interlocking design set. I always model as much as possible vs. using texture maps, it helps a whole bunch with lighting and the final look of your scenes. 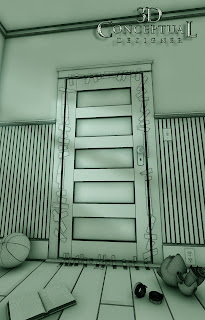 A camera view w/o textures and lighting[ grey-scale] 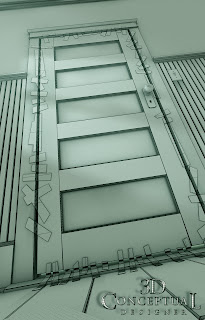 An up-shot of the door was an alternate idea we were going to have the kid block out the foreground lower on the floor.


Back in 2005 while in-house at The Cimarron Group I worked on the remake of the 80's horror film, The Fog, for both the Motion Graphics department ran by Roland Mesa, as well as for the Priont Advertising division as well for Key Art posters.

Today I post a comp idea that I had. My role at Cimarron was that of a Sub-Contractor providing specific 3D assets, so I usually was not given this type of opportunity, but when I was given the chance to pitch an idea, I enrolled the help of the very talented Calvin Sumler to build the comp, and he happily accepted.

A simple idea from the script, at one point the child of the main character was trying to keep the FOG out of the house, as the ghost pirate would rap on the door, so you would let them in. In one scene, the kid tapes the door frame so the fog cannot seep in and for the comp we had a backshot on a head with a kid huddled looking at the above door with the light coming in the cracks he missed.

I added lighting blocks outside to make it feel that someione was standing on the other side, and we added a green tint to the "Evil Fog" as well.

A bunch of items in here Cimarron sells on TurboSquid, so I used the door window, basketball, and the bear from my stock catalog.