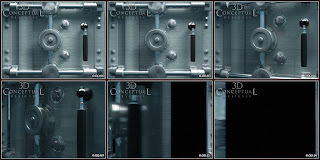 The style Board Frames for the Vault opening "wipe" I made for the editor to use for the DVD release of HEAT. 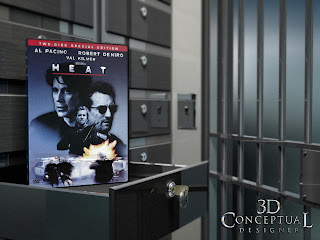 The TV spot ends with the Heat DVD up from the bank vault drawer and the disc animated out the side. 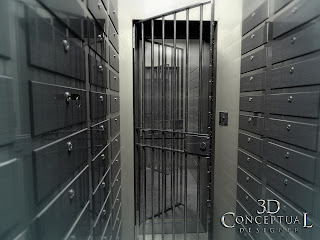 As we travel into the vault I did the "waiting room" to enter the lock box room. 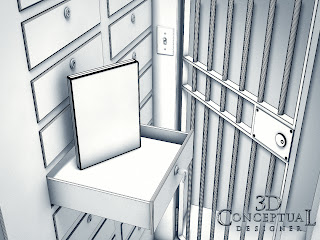 Here is a Geometry view showing the structure of the High-Rez 3D Models I built as a two wall set for the last shot.


Back from 2003-2009 I ran a small "One Man Army", 3D Design department in-house at The Cimarron Group, and The Home Entertainment Department, was one internal client that I did 3D backgrounds still and moving for the motion graphics pieces for on various DVD releases, and HEAT, being one of my favorite movies was a joy to do a few things for.

All images were bank vault related, from the big thick door swinging open, to the drawer opening up in the vault itself, with the DVD that animated out and the Disc rolls to the side[ as usual].

I built all 3D models as high-rez only models at the time, today I would do quads to get a bit more derails, but it still holds up after seven years alright in my opinion.

Cimarron still sells a few parts from the scene at Turbo-Squid, and you can get the little key and lock here.

We also re-used the vault door[ I made it taller] for the film Jumper, a few years later, at Cimarron as well, you can see it here.

Posted by 3Dconceptualdesigner at 12:30 PM