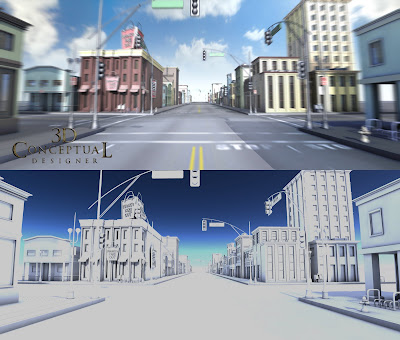 I worked on the Theatrical Trailer #2 for Dreamworks Monsters vs. Aliens 3D film. I was tasked with a few pieces but the main two were the big title slam at the finish and a big industrial doorway that is used as a scene wipe by the editor.

What made this project a challenge is that they came to me at Noon on a Friday, needing both pieces for a Monday showing to the client. We were competing against a team of 12 guys at another vendor, yet we pulled it off and won the job and finished it.

I built six blocks of architecture starting with the designing, modeling, texturing, and lighting before I animated the scene. I basically built this in about 12-15 Hrs from scratch, SANS the three bigger buildings I put in the background as filler. As a side note Dreamworks Animation had called me months prior to buy my city models for use in the feature itself, so it worked out well that the trailer buildings I used were the exact ones that they used in the film as I was the same source.

With building a big door, I was tasked with adding in the Dreamworks logo on it, and it was to match the look of the film as well. Shot some red light into the scene from the cut to match it up, and it was done.

All in all this was a very challenging project in that we finished this spot in SD, HD, Real 3D and two other 3D Stereoscopic formats as it was used in the Superbowl 3D commercial set, along with the Jonas Brother film which used an additional Steroscopic format. A $50K job done for around $12K in 3D.

Trailer Link in Post Title above, or paste in this:
http://www.youtube.com/watch?v=CfxWOpFNoRM
Posted by 3Dconceptualdesigner at 3:18 PM