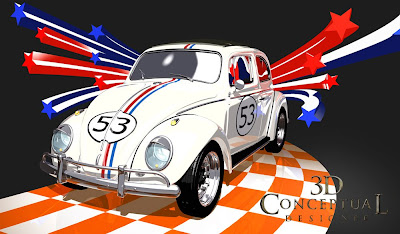 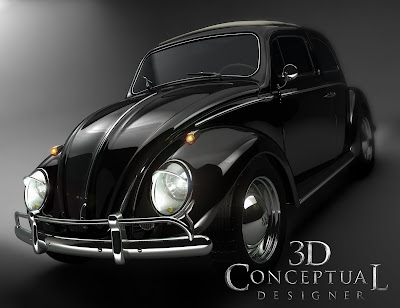 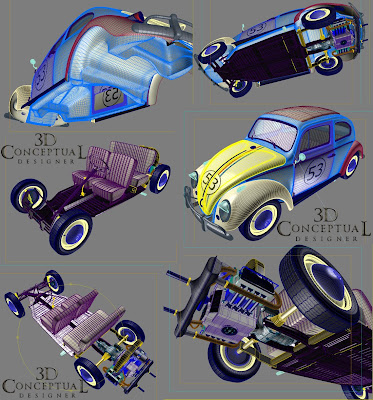 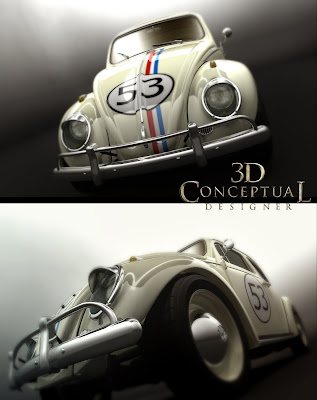 I had down time at my prior employer and decided after hearing that a new Herbie movie was coming out to practice my quad modeling technique after I modeled my first car the Lotus Elise. Now the VW bug is one of my favorite cars, and having owned over a dozen vintage VW's myself, I was excited to build out the car.

I started with the body and built out almost every part, including the floorpan, front and rear suspension, interior, engine, and most every little piece. A typical car takes about two weeks to build, or 80 Hrs from scratch. This one was right around that time to complete.

For the Trailer, I sent out the car to be rigged and animated by Dean Fowler at Machine Films. Once the animation was done, I rendered it out using a "Cartoon" shader to look like a posterized 70's feel that the Film Producers were wanting. I used Cebas' Top line GI Renderer, Final-Render and Final-Toon.[ Permanent Linked to the Right>]

A few years went by and I met with a fellow A.C.C.D. alumni Jerry Garns and we talked about automotive lighting as we worked on a few Honda Accord spots with the virtual Photography. I implemented what I had learned and I did "Herbie Black Tie". Funny now Volkswagen has incorporated the "Max" character a 1964 VW into the current advertising campaign.

Link to Trailer is in Post Title above or Paste in text below into your browser: