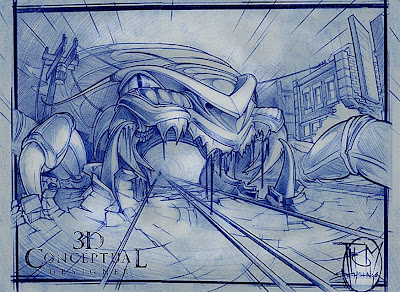 The main POV as you approach the finale for Alien Attack the MIB attraction from Universal Florida from the 90's. 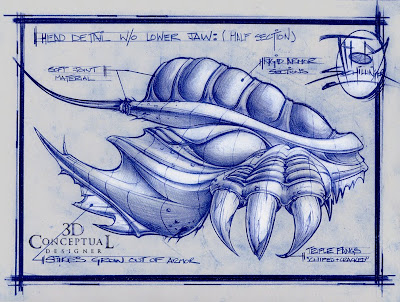 A Sectioned half of the head shell 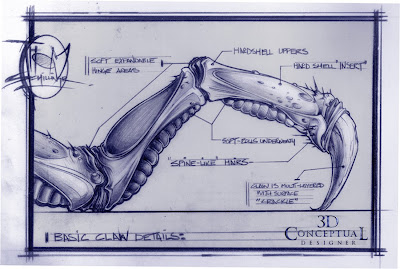 Side View Detail on Edgars Claw, about 16 feet tall as a functioning prop. 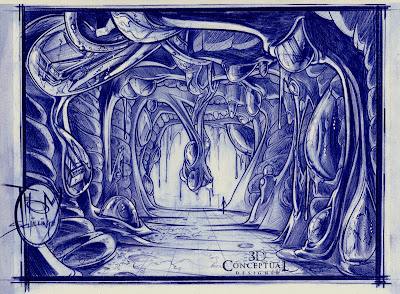 Inside the throat with a Ford "POS" up front in the puss bubble...

After leaving Disney Interactive, I pursued some Theme park work for a few years, I had met and worked with Dave Cobb prior to working at Universal over at Landmark Entertainment Group on the M&M's World, and some other various Themed projects.
The project was well under way and designed but they needed one more piece for the project, the finale. Being a huge fan of the film made this very exciting to work on, plus the subject matter was perfect for doing 3D Conceptual Design work.

I was tasked with designing out the Big bug "Edgar" from the end of the first film. It was designed in a way that the tram car would be eaten by Edgar and you would be inside his body.
You can see in the above sketches, that I did surfacing studies for the main parts of the head that was to have articulated fangs and huge claws tearing up the pavement around you. I also did the inside the body designs when you are in the throat and stomach. If you look close in the above sketch you will see a Ford LTD inside one "pustule" on the wall to give a sense of the scale this was to be. HUGE!

Click the post title to link to some photos of the attraction, or paste in this text into your browser:
http://www.universalexcitement.com/STUDIOS/MENINBLACK/MENINBLACK.htm
Posted by 3Dconceptualdesigner at 10:21 AM