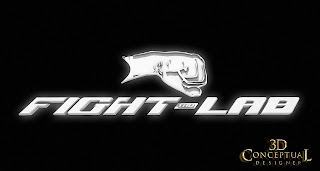 The fist was essential and in almost every design we did and all the preliminary work, and with this concept I put a little THQ shout-out in the hyphen.

The lite version of the fist w/o the holding device so it was more of an lit edge feel[ of my fist] with a double barbed wire cutting down the middle.

I did a few concepts where I replace letter parts with the wrapped 3D barbed wire and with this over and under type treatment I did just that.

The logo in the outlined fist with heavy negative space usage.

A more 3D logo with the ring tilted back and the log on a separate plane.

Here a 'mini-fist' is used for the hyphen.

Barbed wire won the day, but I did a few with the chain link a staple in MMA look and feel graphics[ the cage]

A multi-layer type set up with a heavy fist and mini THQ hidden as a  second read in the separation bar.

A shot straight on that I posted in PART I at a low angle. I used a bit less wires in back as well.
Project Review
Fight Lab 3D Logo Exploration
for THQ Game Studio 2009
PART II


This is my second posting for the 3D logo concept work I did back in 2009 for THQ for a new division they were considering called 'Fight Lab', and today I have the rest of the initial designs done in 3D as a continuation from PART I here.

As a 3D Designer, I can start in 2D[ traditional sketching or digital], since 2D is 66% of a 3D education, but when I go right into 3D and design in there, I am designing in virtual 3D volumes in the 3D space rather than from one view as all 2D is done, so my Industrial Design training kicks in as I think thru the top, bottom, and many other considerations as I design it out.

This is a continuation of the direction from PART I, and I did as many variations once the elements were built out in 3D, and this is where 3D shines, as I can scale, bend, twist, and taper any of the elements and create a new look quickly, so the client has a full set of choices to pick from.

Part III will be posted in a bit, stay tuned.

Cheers, THOM
Posted by 3Dconceptualdesigner at 9:23 AM