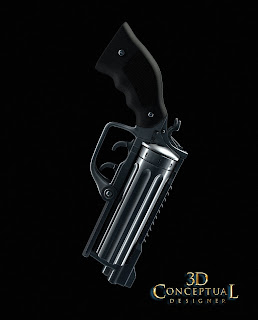 The first shot delivered for R.I.P.D to Cold Open was this side shot of the iconic forearm used in the film. 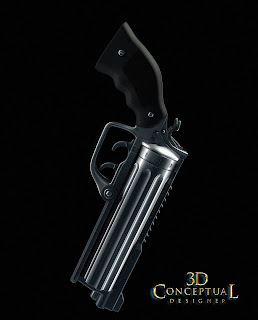 I was asked to make it 30% longer so I adjusted it in 3D, and re-rendered it out. 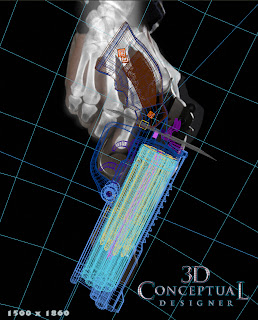 Here is a screen capture showing the alignment that I do to line up the virtual prop with the photography provided to me. 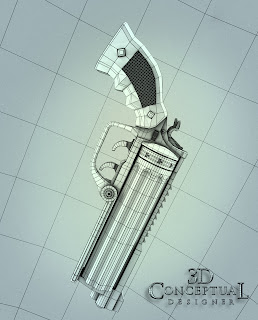 This is the base Low-Poly mesh I made for the virtual film prop for RIPD. 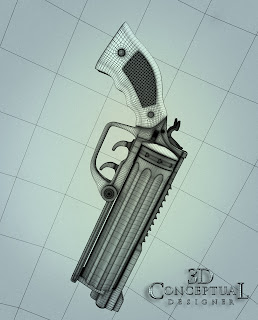 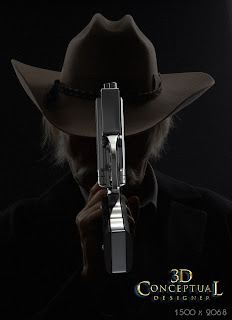 An alternate comp with Jeff Bridges silhouetted with the gun up front. I rendered bright so they could take it back to a lower level. Too dark they have no room to go back up, so I did it this way. 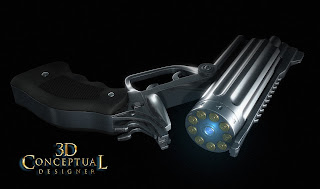 I did two shots with the gun opened up revealing the Long bullets as well as the blue glow for the "special shot' in the Center. 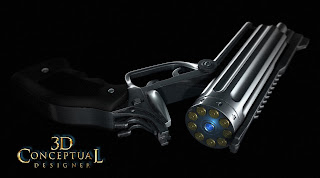 A view similar to up top with the longer barrel and cylinder.

A few years back I was hired to create a Virtual Prop replica for some Key Art work for the Agency Cold Open. They were doing Comps and needed a futuristic Gun Prop replicated for the then in production film R.I.P.D, and I gladly jumped on it.

I received a few shots of the prop and proceeded to create this fun little prop in 3D as a subdivision model. Once it was built out I was given some direction as well as some photography to line up this virtual firearm with so I rendered out just over half a dozen images for their presentations.

In advertising selling is everything, and with virtual props like this I can adjust the model itself to make it "Larger than Life", or in this case a bit longer. They wanted the Cylinder and Barrel about 30% longer, and if this was photography it would require a few good hours of time to 'Frankenstein' it together, but with a 3D asset like this, I merely took off the subdivision, went to the base simple mesh and pulled the points out to the desired length and re- smoothed and re-rendered it. A whole lot faster and cost effective to adjust as Virtual Photography of a virtual film prop.

I will have more R.I.P.D. posting in the weeks to come as I worked on this campaign for a few agencys.