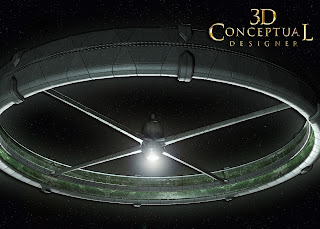 A very early render of the space station a bit cropped in for Elysium advertising Comps from back in 1012. 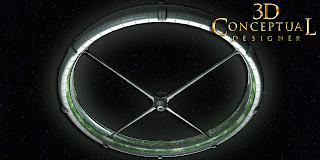 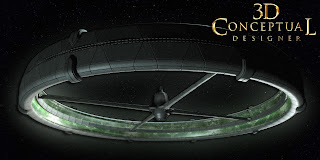 A backlit show showing the thickness of the outer ring 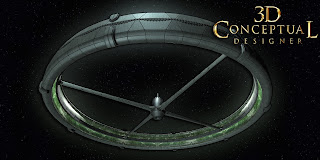 A bit off moonlight on the rim of this Elysium Space station. 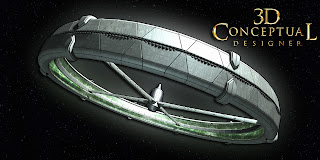 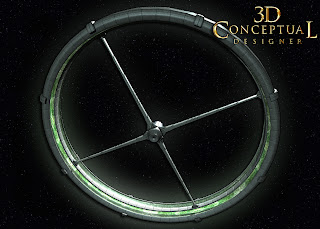 A very low almost bottom view of the space ring. 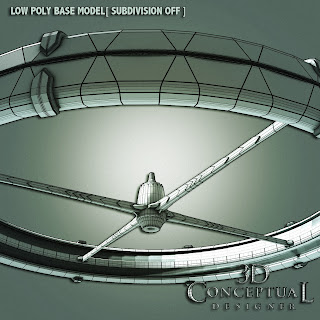 This shows the basic polygon build with the subdivision[ turbo-smooth] removed. 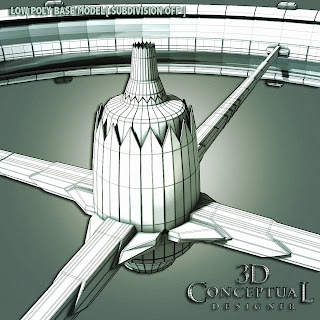 The center details were all based on a single painting I had. 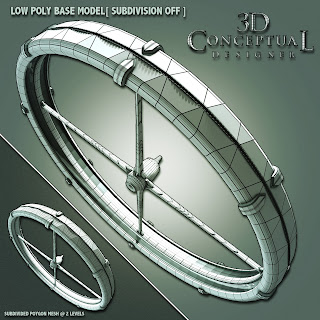 A view of the total ring along with a shot of it subdivided in the corner done for Elysium.


Last year I was asked to replicate a space station from a small 2D painting[ concept art] provided to me from the film Elysium from a regular client of mine Cold Open out of Venice CA. The design in the final was different, but early in like this you build what they have.

I regularly will recreate a prop or vehicle from a film that they need at a specific angle or lighting situation for a Movie Poster Comp, and these requests are done usually before the CGI [Computer Generated Image ]for the film has been done, so the asset does not exist, or at least the Agency does not have access to it.

They call me to build one out so they can effectively sell the comp ideas with artwork. I built this out and rendered the object at various angles and lighting angles for the comps. I am given a thumbnail sketch of an angle and light placement for some,and for others I just shoot a variety of angles with some various virtual camera lenses to get the look down.

A one day gig with a bit of spill over a few days later for some added shots. This is where 3D illustration shines, as you build once and render as many angles as they want to buy, so in 2D each angle would be a new unique illustration and require the same amount of time for each shot.

With 3D Illustration on the other hand, once the time is in for the fist one, you simply move the camera and lights to the desired next angle and render it out, so the cost is a fast setup and a new render time, which is always less than a totally new illustration.

Cheers, THOM
Posted by 3Dconceptualdesigner at 9:03 AM