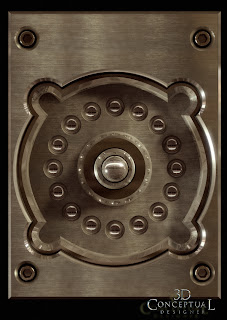 Initial direction had the look of the X-Men Posters I did for them, but it was not a fit for the film, though we were directed to do a pass that felt clean glossy and superhero-ish. 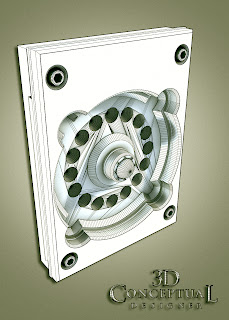 Here is the 3/4 polygon view showing that I exaggerated the depth for the 3D Illustration as a stylization technique. 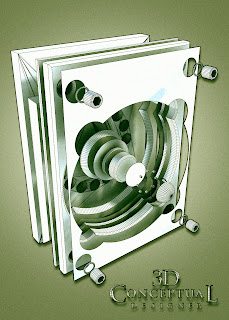 A explode view of the above model shot the various Allen bolts "O-rings" and plates that made up the first pass design. 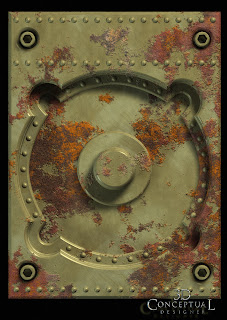 Here is the first pass at the military metal with rivets and rust, that was picked. 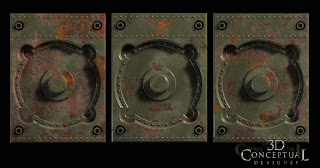 Here you can see the three variations I did because I used procedural textures I merely changes a slider or two and hit render again, this is the power you will find in a procedural map on a short deadline like we get in Home Entertainment design projects.

While I was still in-house at BLT and Associates, one the the larger Theatrical Advertising houses in Los Angeles, I was put on the Home Entertainment divisions packaging for Black Hawk Down due to be released on DVD.I had worked with Matt Rice and his team on a few Key Art projects, but this was an inner sleeve concept we pitched to the client and it did finish.

They wanted to create artwork that would fit behind a clear plastic back-plate that holds the DVD disc, so I did a quick concept that had an X-men feel as directed; Super glossy chrome and brushed metals , but they thankfully changed to a more beat up rusted military look as seen in the film.

To achieve this I used Dark Tree's Simbiont max plug in and did the rust procedural. The main reason was this was to be a three disc set and I wanted each back plate to have a unique look to the rust without having to hand paint the textures[ no time!], and with a procedurals, you can change the 'seed' values and density to achieve 3 fully unique rust looks with a touch of a button and a hit render.