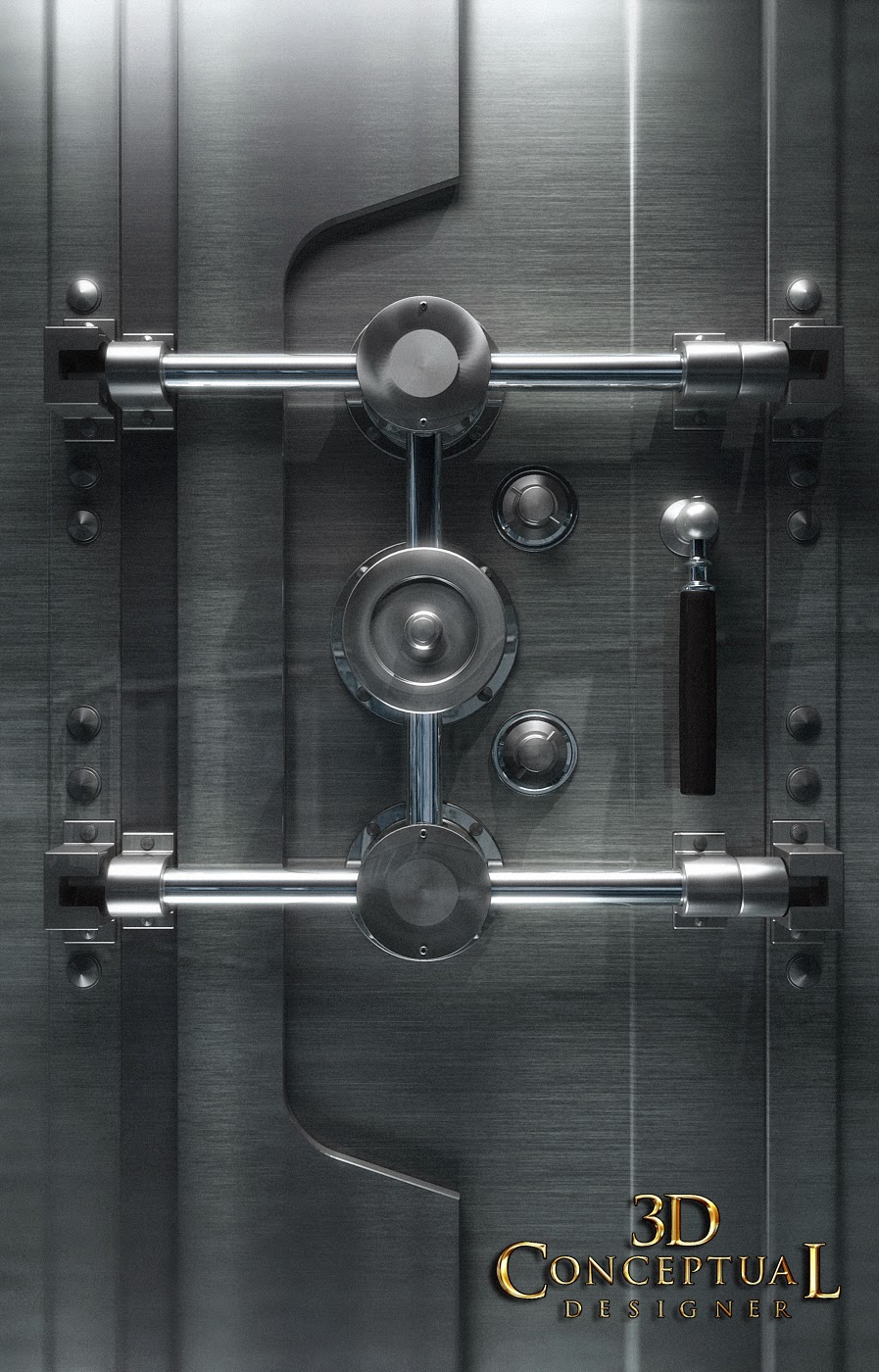 The Main front shot of the Virtual Bank Vault Door for Key Art for the film Jumper. A One day project to design, build, texture, light,and debug so I could deliver multiple views by EOD. 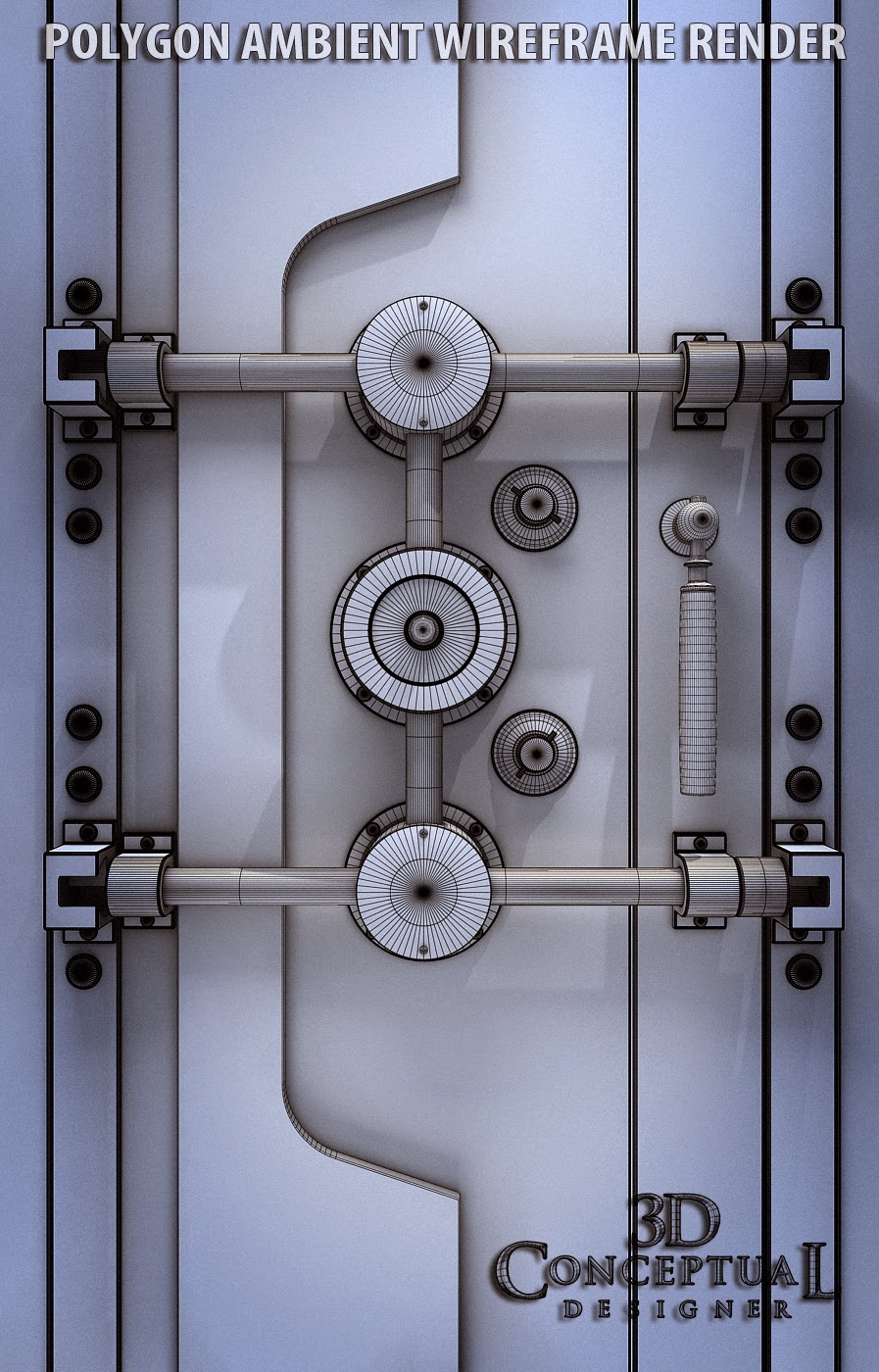 The Wireframe render shows the basic geometry used in this quick build. 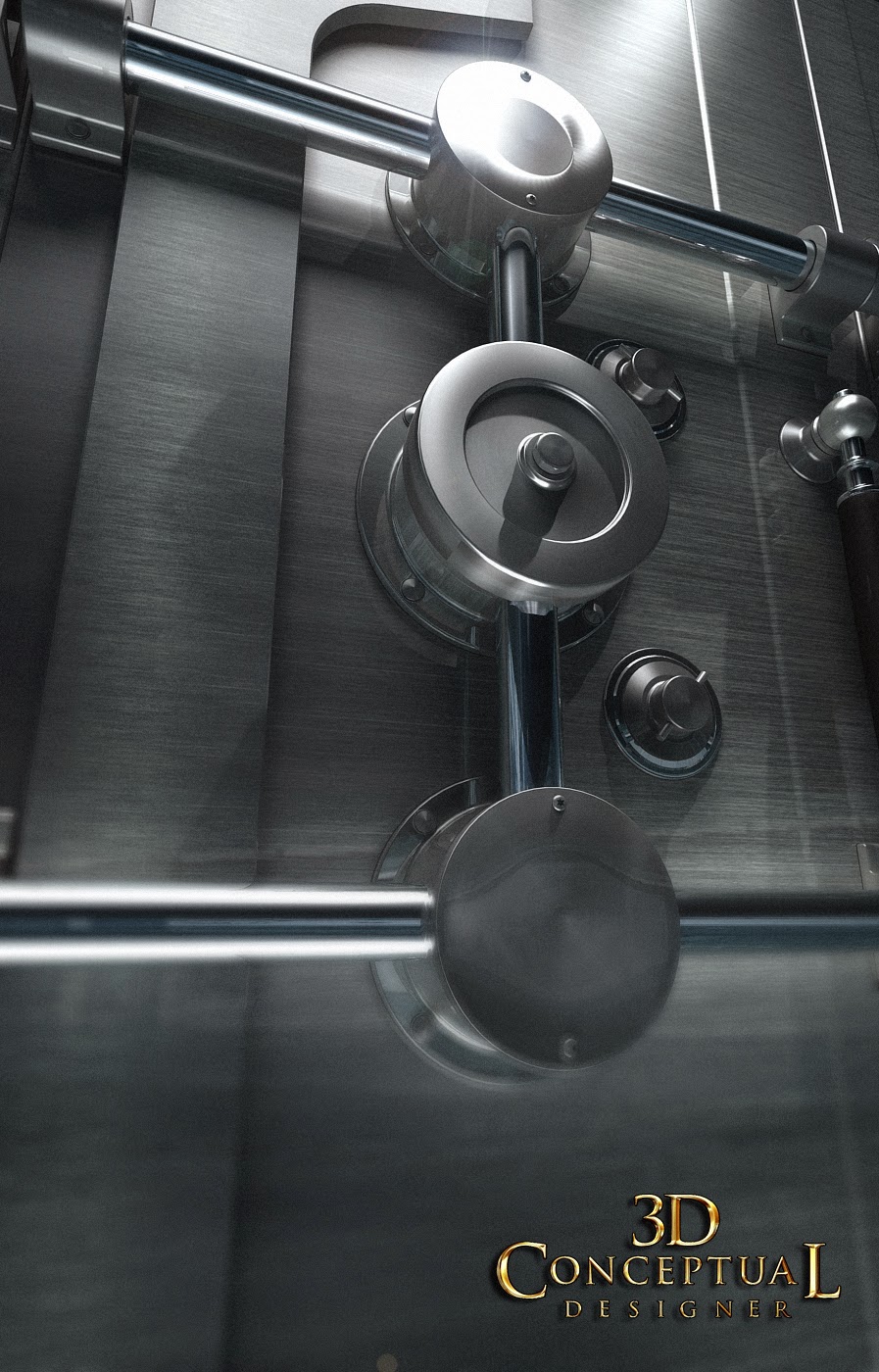 A Nice worms eye up angle on the door with a hotspot highlight up top. I added some Depth of Field to this shot. 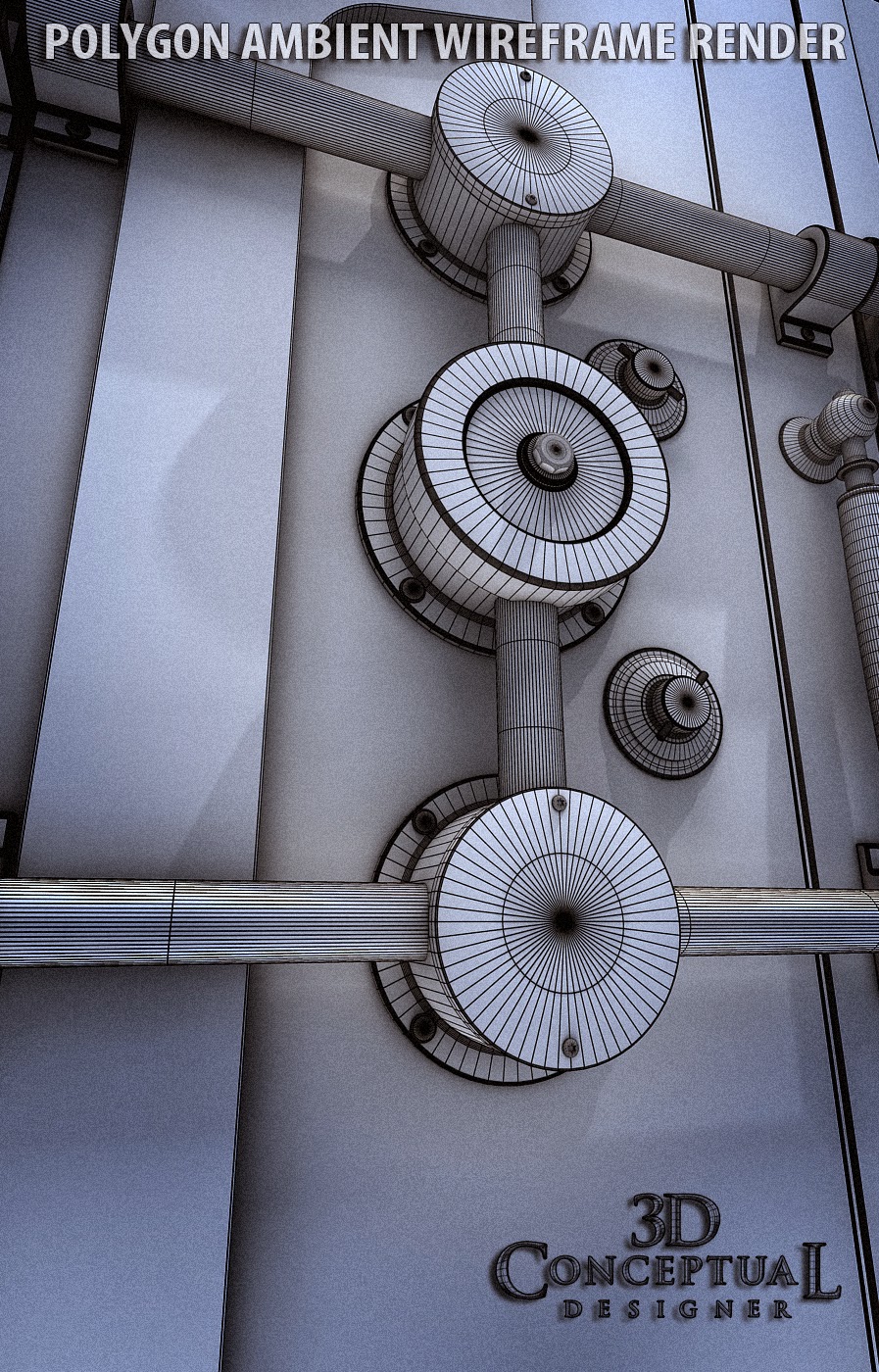 The Ambient Render of that up shot. If built today, I would go full sub-D and have an even division on the large door plates to get better GI as well as more accurate caustics. 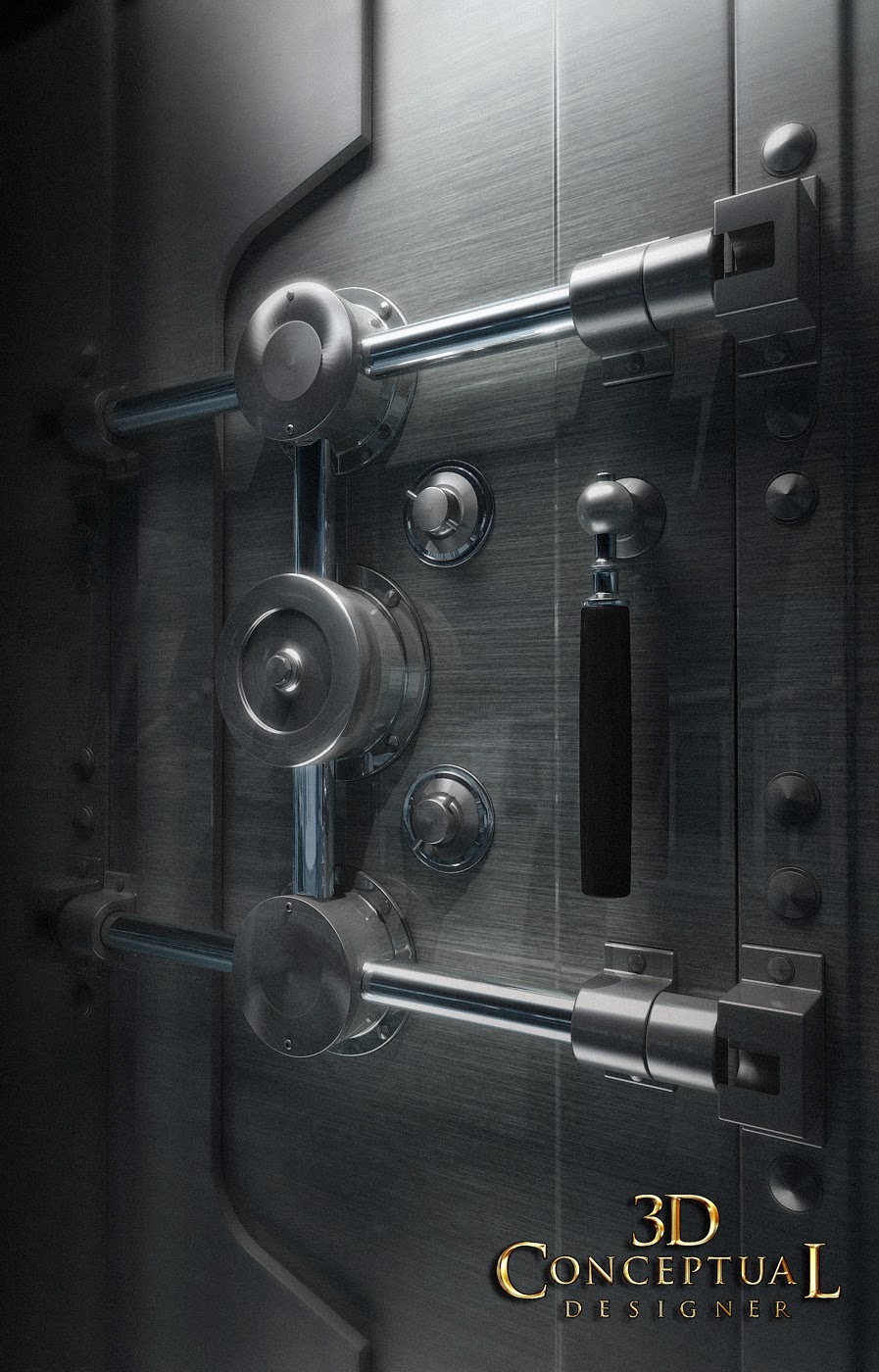 The side view from the opening side. I darkened the left edge in post to hide the lack of geometry. 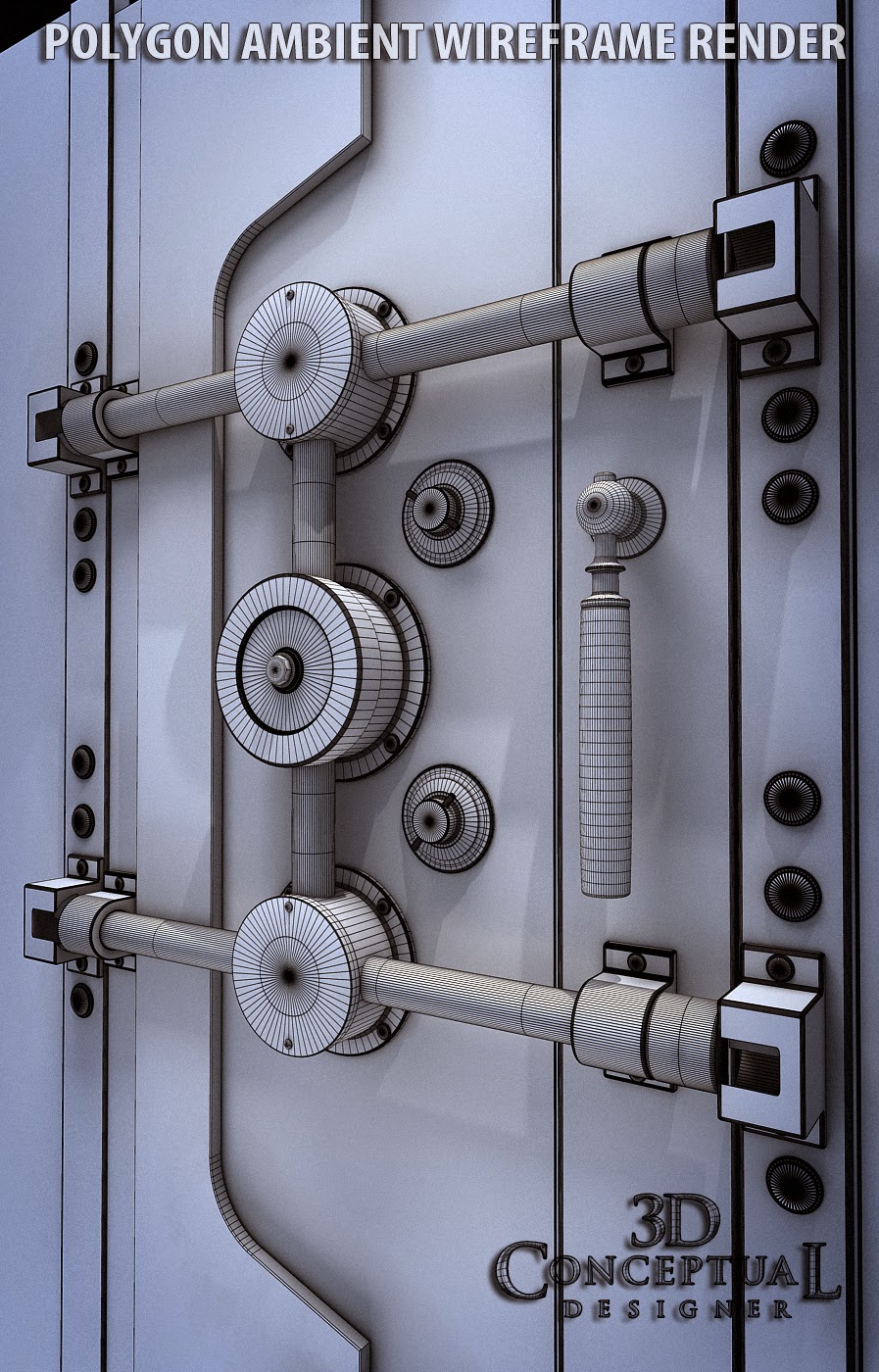 The Wireframe matching shot of this Bank Vault Door from Key Art for Jumper. 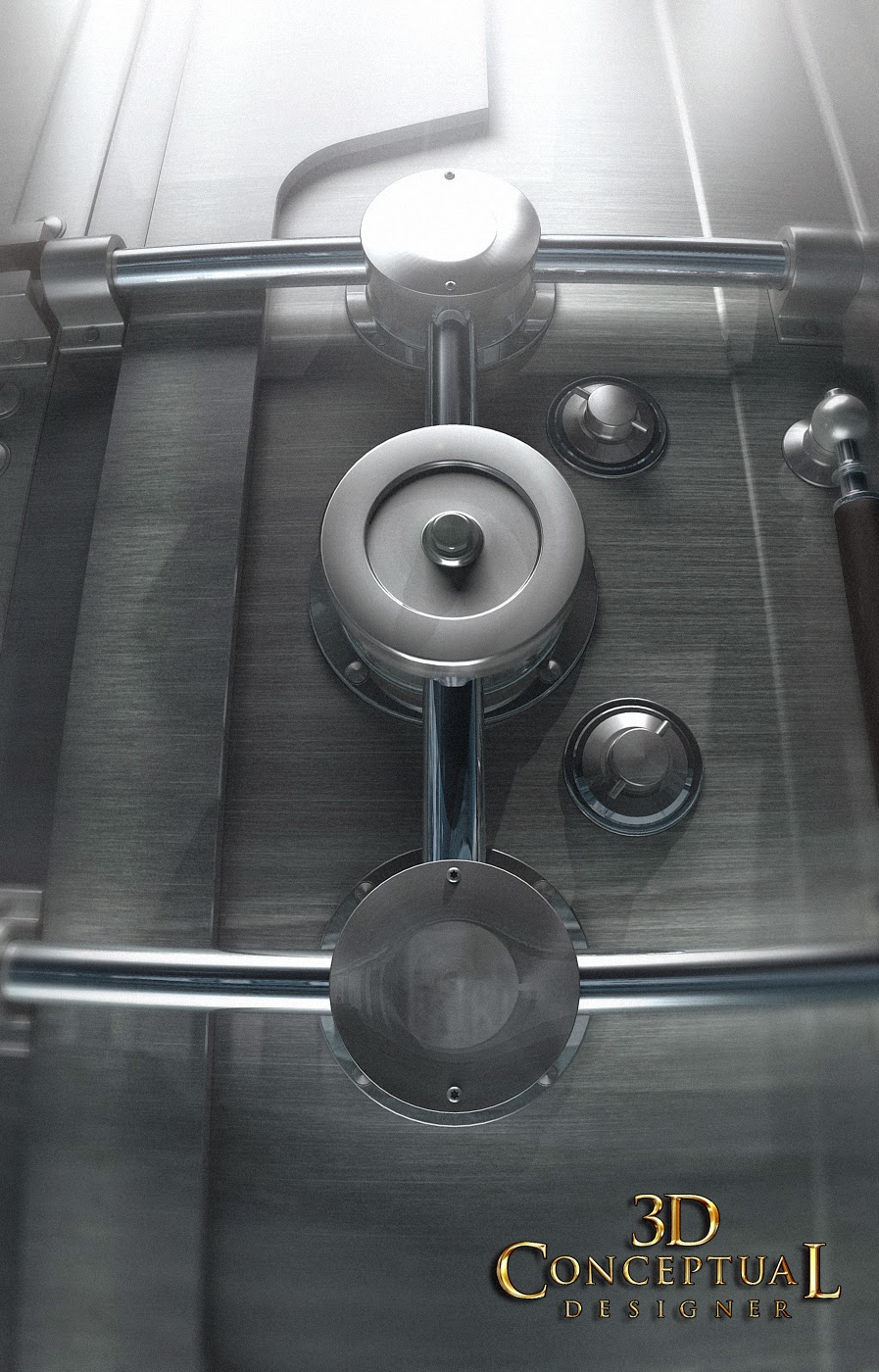 I did a low front with a fish eye lens with 22degres of distortion to get the curved render. 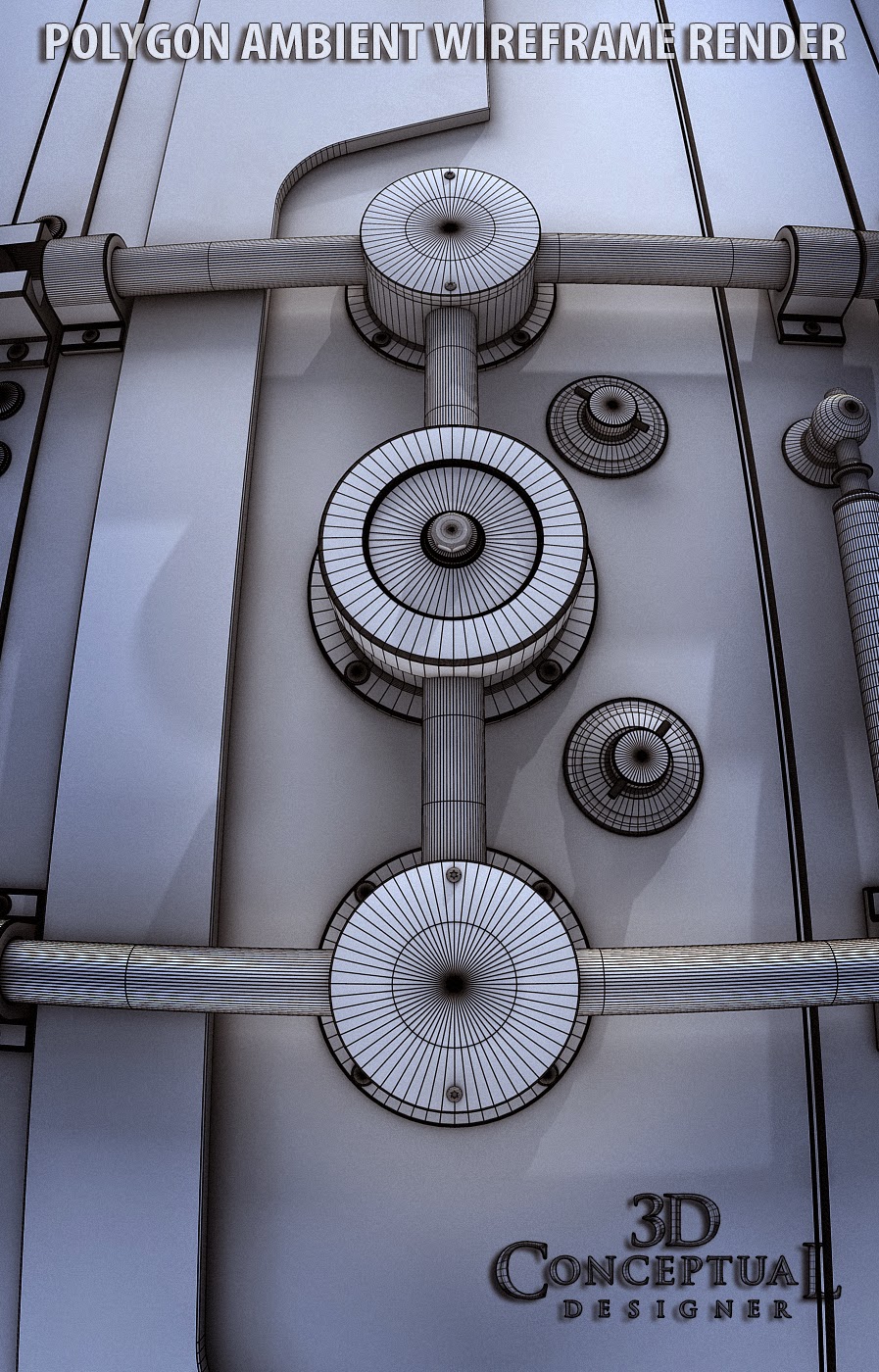 The geometry is straight, the lens effect in Final Render curves the shot at render, similar to the human eye with image projection onto a sphere curved the  lines. 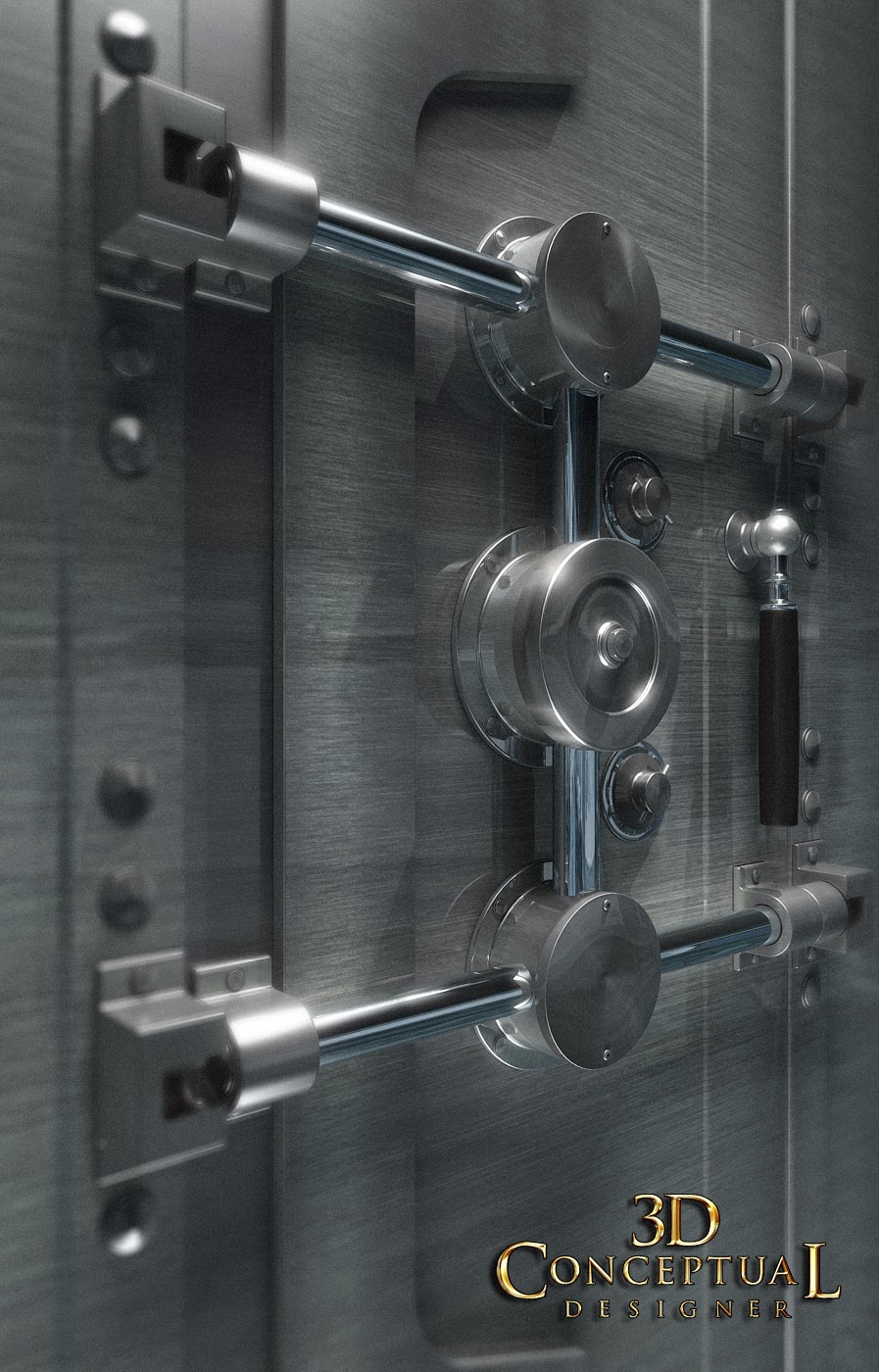 A reverse side shot from the hinge side. I added some glow and glints in post. 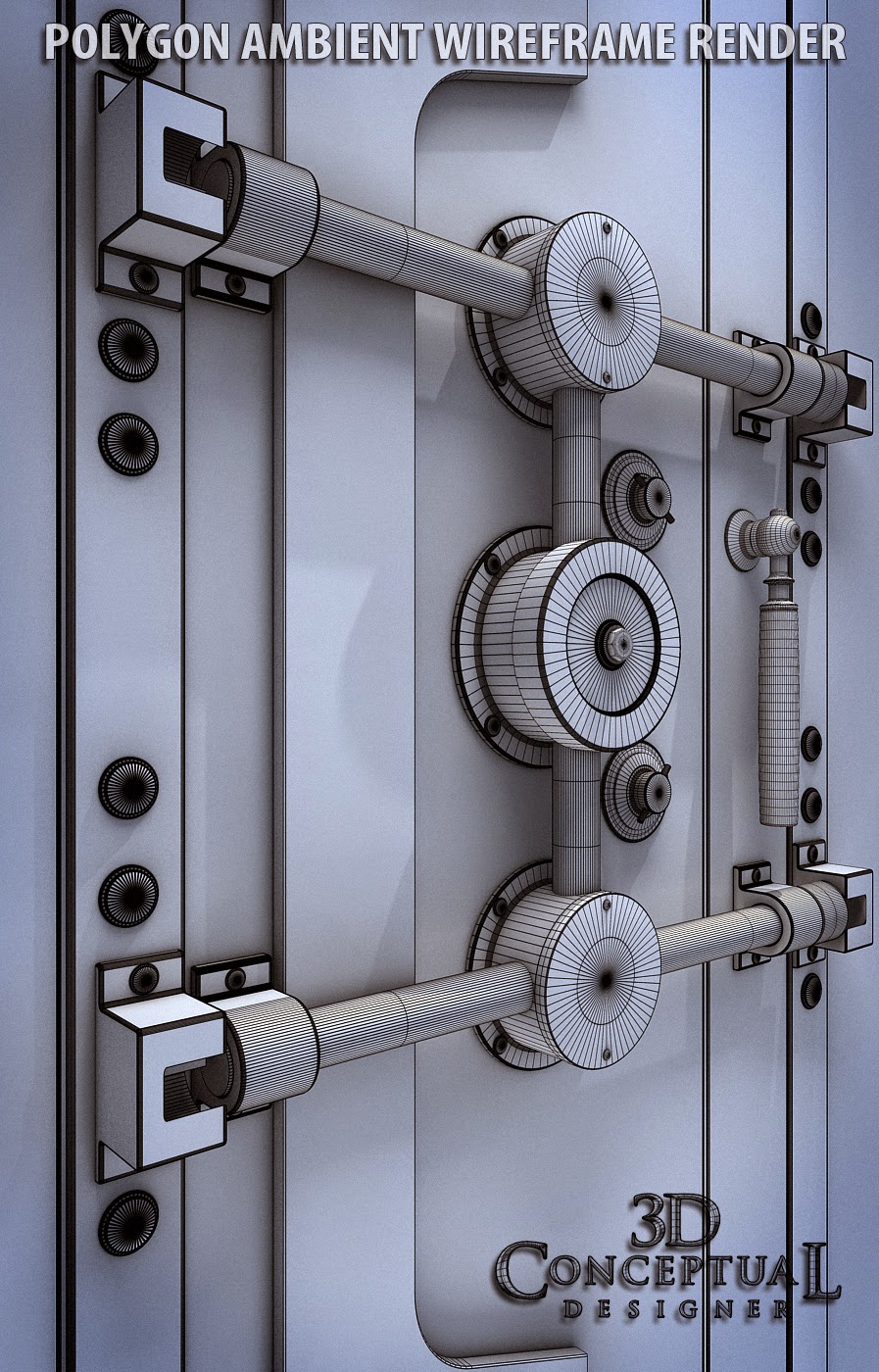 The Wires for that final rendered angle delivered. 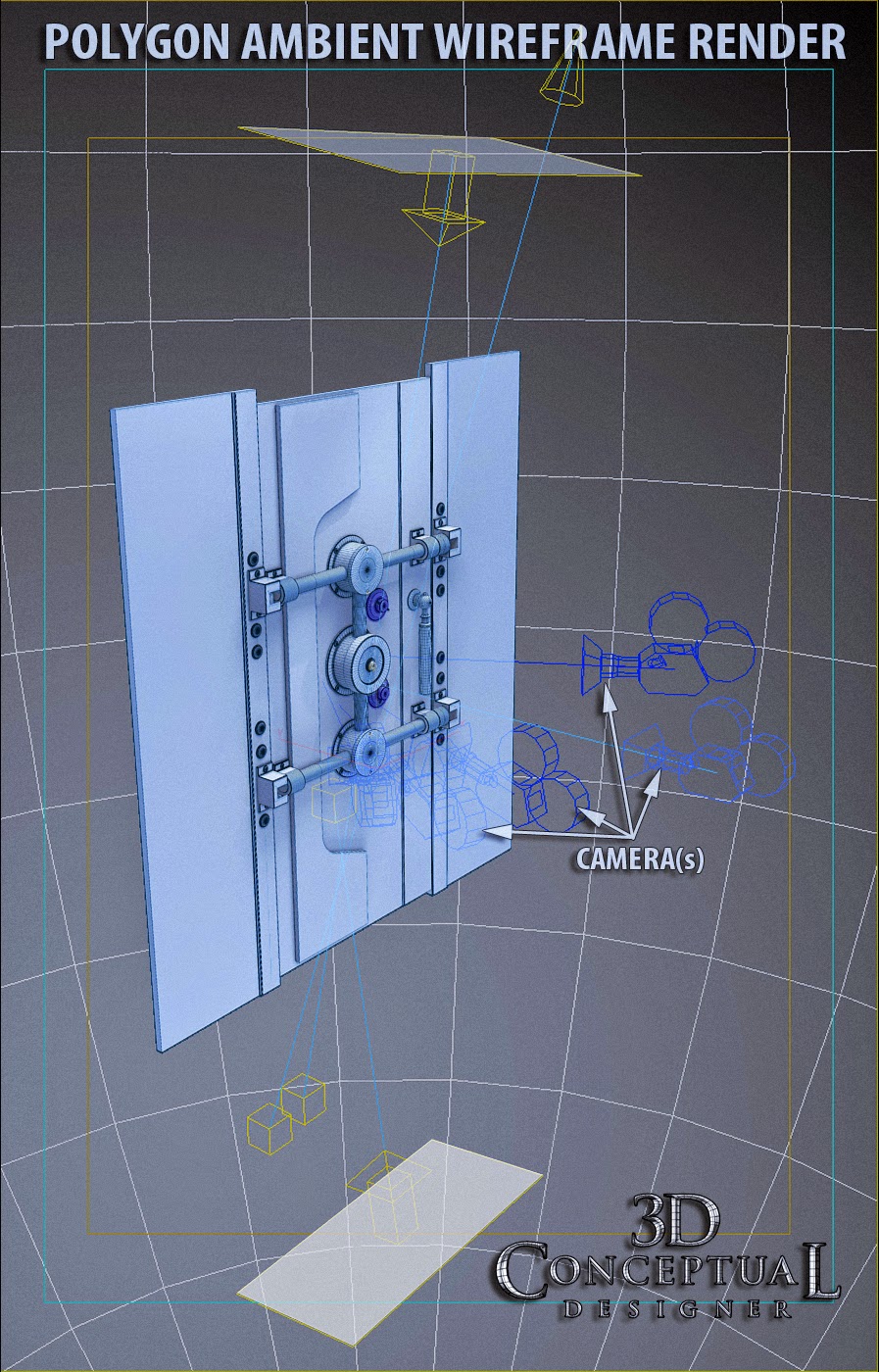 An overall birds-eye view of the scene shows the Rectangular[box] lighting and the reflection sphere. 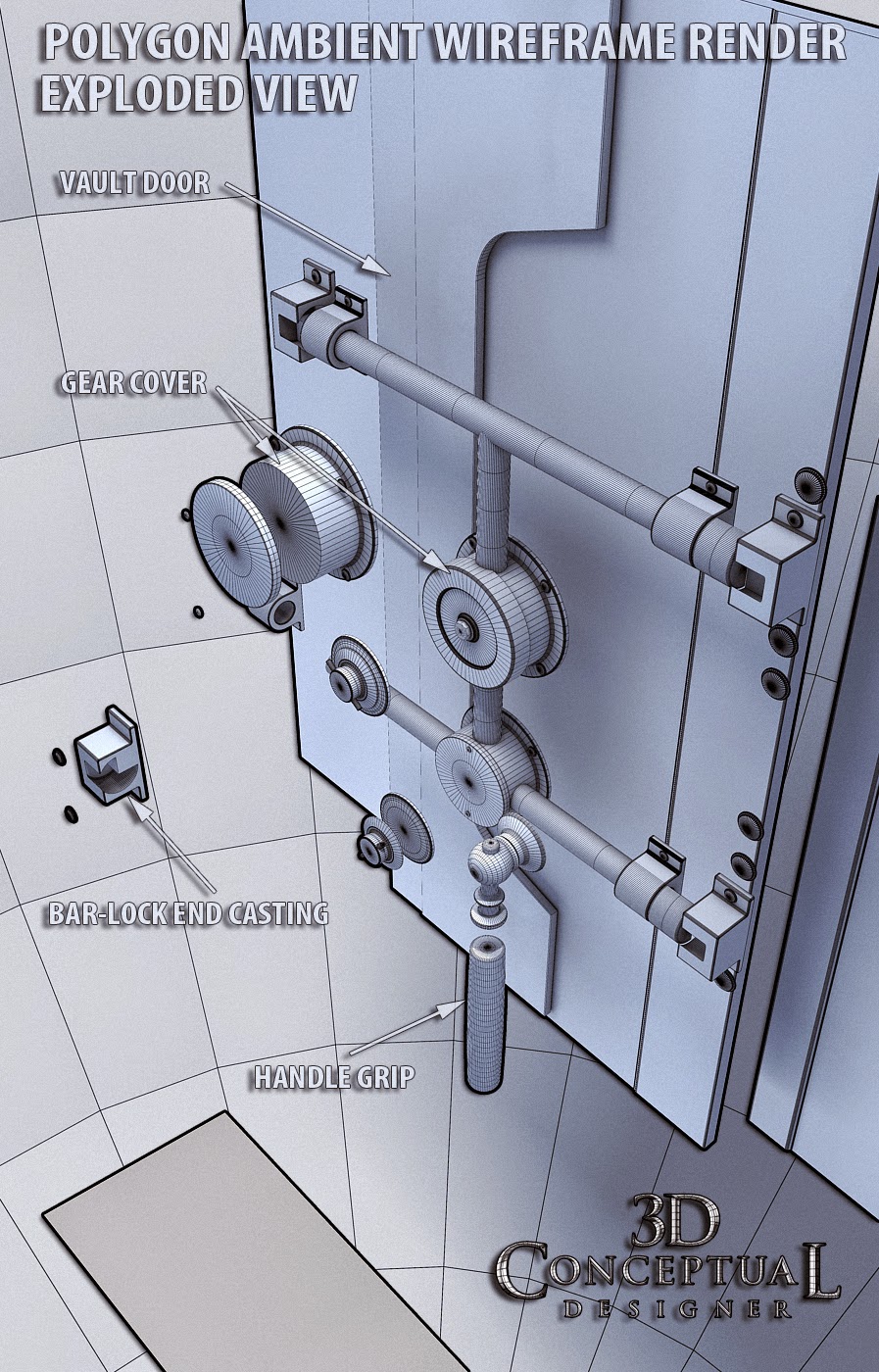 An exploded view of the parts in this build.


Back in the Summer of 2007, I was still running an in-house 3D Design Division for The Cimarron Group, and I was given a Key Art assignment for the film  Jumper, it was yet to be released, and I was tasked to create a Bank Vault Door for a Teaser Poster Idea, full frame on the One-sheet.

I had already made a smaller vault for the DVD release of Heat here, so I modified it to a tall format added the sides and reconfigured the file. As usual they needed renders by EOD, [ End of Day] so I had to hustle to deliver a full set at 2250 x3350.

This was not a Sub-D build as I did not have the time to do that, so I used 3D primitives, lofts and basic 3D modeling to get it done quicker originally, and all additions and texture adjustments had to go fast as well..

Once it was all set up, I did a front shot with some added dramatic angles as well. The poster was just this Vault Door so I added the Caustics into the shot so we'd get the glints of light off all that steel.

A fun build. that was used on a few projects while I was there.

Posted by 3Dconceptualdesigner at 4:27 PM