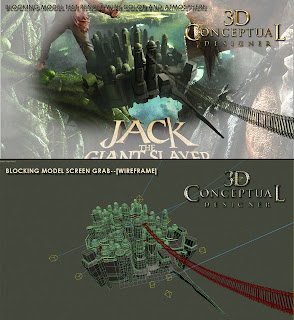 STEP ONE: The first pass at the blocking out of the city. A screen-grab as well as a simple test render with lighting and atmosphere to match up with the comp provided to me. 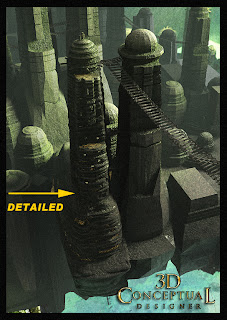 STEP TWO: I flesh out a single structure to finish level to get approval on the level of finish since this is a one day job. 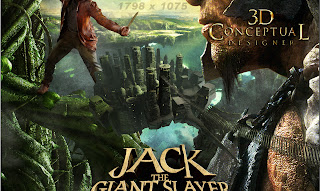 The final render I delivered with a fully finished city over the background Low-Rez comp. 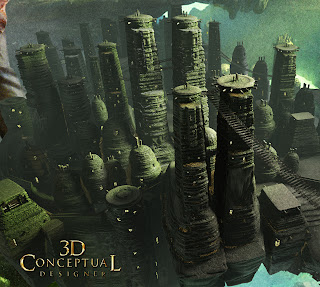 A Close-Up of the City center from the final one day 3D Matte Painting Gig. 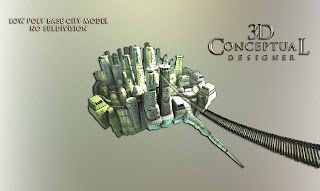 A shot of the base Low Polygon Model with no Subdivision or Displacement added yet. 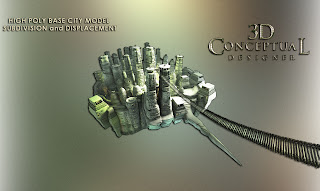 The final High Poly Model with subdivision set at two and a displacement added to add in the groves and mud layers to the brick build very quickly. 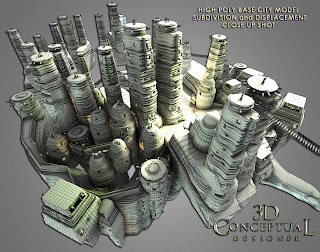 Here I show a close up of the displaced and subdivided geometry I created for this one day Matte build for the Key Art for Jack the Giant Slayer.


I had the pleasure of working on the recent Key Art Movie Posters for the new film, Jack the Giant Slayer, and today in my PART III posting the 3D illustration Matte I did of the cave city for the finished Key Art.
Building out a fast matte painting is something that I have had to do a few times,and an advertising a digital 3D Matte Painting is very different from a regular film matte.

First and foremost is you get one day to do it, whereas on a film they spend weeks on a single shot , and I have to get them something very fast so you need to figure out methods to get very close, very quickly as you need time for the finished renders[ a few Hrs] as well and the budget and time-frames are always very compressed.

First step is I block out the main buildings put a texture that I will start with on there light it and add atmosphere and get it lined up to the comp provided. I then will take a single building and flesh it out as seen above to get then an idea of the level of finish I will bring in a day of work.

Once approved by the client, I proceed to finish the entire city out in 3D and render it at 6000 pixels wide for the finisher, which in this case was Lisa Carney, with whom I had worked for a few years together when we were at BLT and Associates a decade back.

A fun project, and you can view my first to posts on the film advertising and Key Art, here[Beanstalk], and here[Rock Carved Waterfall Head].