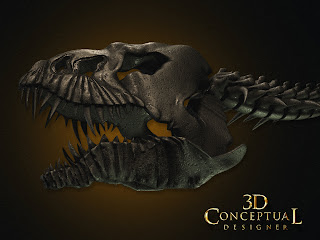 The Final shot of the T-Rex Head and Spine I made for the first Night at The Museum advertising work back in 2006. 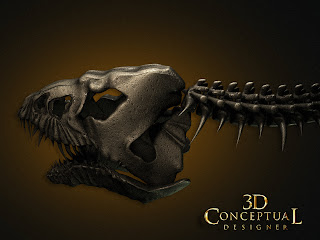 I did a few alternates at a high and low angle as some comps needed a different angle and this is where 3D illustration becomes the best cost solution to the graphics needed. 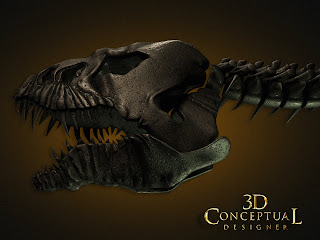 I low angled shot of the head edge lit. 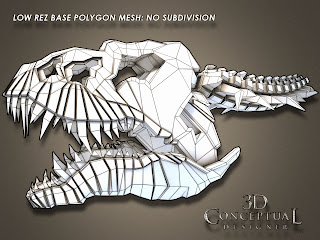 The base Poly as I built it ready for the subdivision to be added. 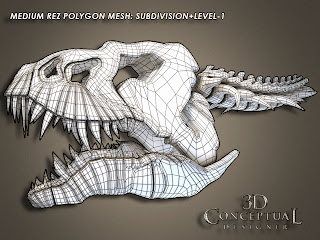 Here I have applied a subdivision to the Polygon Mesh at a low level of one.
[ quadruples the face count=4x] 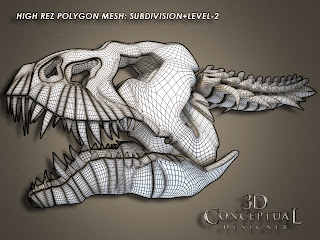 The levels of subdivision were increased and for most shots this level worked fine. 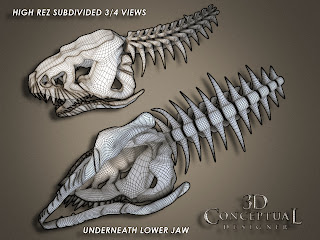 A look at the Head and Neck Spine as built for a few 3/4 angles to show the full build needed.


For this  my third posting on the 3D Illustration and Motion Graphics Animation work I did for the advertising campaign for the two films, Night at the Museum, and today I am focusing on the T-Rex Head I sculpted out in 3D to have for 3D illustrations for the two films.

I have posted a shot in the past here, so today I cover a behind the Art build of that 3D Illustration in more detail.

I hand built the skull first as we had a little T-rex model we got online that was a bit cartoony in the face, so I rebuilt the head and neck as seen here for the majority of he comps as they all used the head poking into the shot at some point, so I built it out subdivision to use for close and long shots. I then added the neck too as that was also too rounded and not matching up to the film scrap I had at the time.


I also used the Simbiont Dark Tree procedurals to get the bone texture just right, as well as the Final Render Dirt Shader to get the aging into the nooks and cranny's in the head. The final finish was a black tar finish similar to the Museum bones found in the film.

You can review PART I here showcasing both films I did work on for the Advertising, or PART II with the Tablet here.