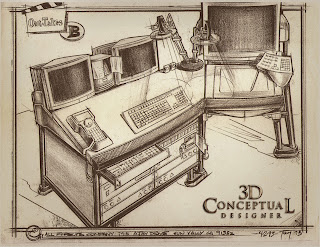 This was the closest sketch to what was finally built for City Walk. 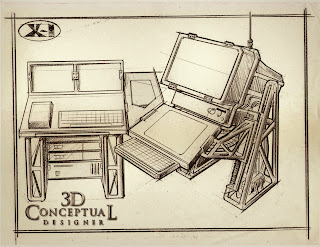 We experimented with various monitors and enclosures, along with every detail in the piece. 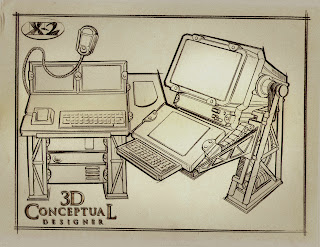 The handheld input was swapped out a few times until a manufacturer was picked. 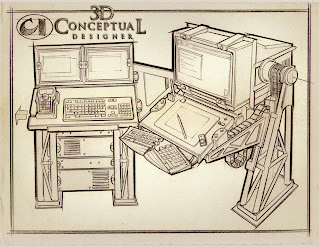 Many designs used the cable covers in those "chain-Like" covers seen in all motion control set-ups, and that was the point as this was to match the actual mechanical  workings used for the photography equipment used there.


Out-Takes was a blue screen photography studio at Universal's City Walk Outdoor Mall in California back in the late 90's, and in my sixth posting today on the project, I have some added alternate designs that were done for the project.

One part of design that is not as glamorous as people would imagine are the alternate options that are needed. These usually are not full new designs like what is done in the Blue Sky Concepting Phase, but it is all about refinement and options. Sometimes the changes are extremely small, but they need to be fleshed out in a sketch so that those who hold the purse strings can make a call and get the project moving.