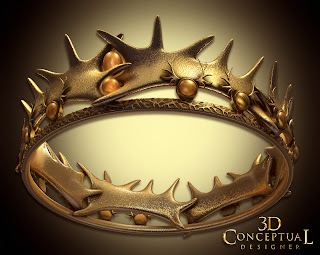 Here is the final finished 3D render that I delivered to Cold Open for the final advertising work done for Game of Thrones. 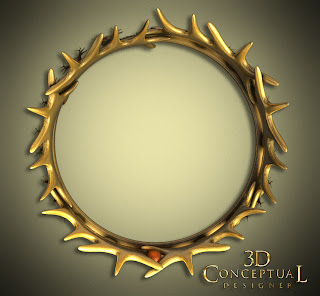 Here is the first round crown from the top I adjusted the textures lighting and the antlers designs a bit as we proceeded. 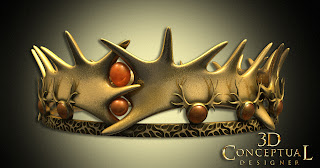 A very early shot before the jewel and gold materials were fully dialed in but the basics were there and ready. 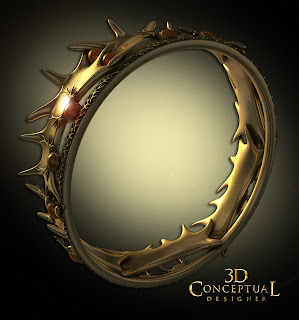 This is the almost final crown camera shot used for the last image delivered. 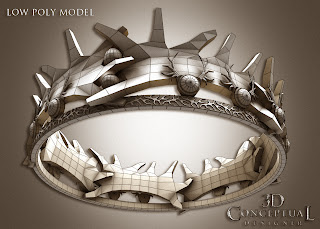 The low poly model I built of the crown with all subdivision removed from the models. 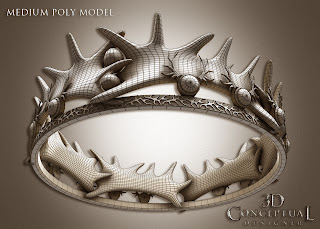 Here is the medium resolution model with one level on the base parts and two levels on the bigger antler parts. 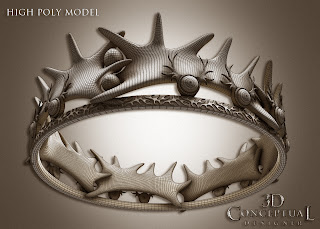 
Season two of Game of Thrones, premiers this Sunday on HBO, and after I finished the crown image above for the 2nd season advertising campaign, I decided to watch season one via On Demand, and LOVE IT!

So here is the first post, in a series on the work I did for the project that started in October 2011, and finished this past January, and can be see on the outdoor billboard ads.

I was contacted by Cold Open, as I have done a few projects with them these fine folks the past few years, and with some ex-BLT'ers in-house there, they are accustomed to using my 3D services for more that just an extruded logo. I was asked this round, to build out a handmade crown to match the crown from the first seasons show that was worn by the King[ R.I.P., Long Live the KING!].

Its design is a series of antlers interlocked with amber jewels to form this great crown that I had a chance to replicate in 3D for the posters and billboards.

I built this out as a full sub-division poly model so I can increase or decrease resolution as needed. I also exported the file to a web team for animated crown FX for banner ads etc. I rendered this out in Final Render using the dirt shader, to add just enough aging to make it match the look and feel from this great series.

I also built out the new crown for the boy king, as well as a few added items I will be posting moving ahead in the next weeks to come.