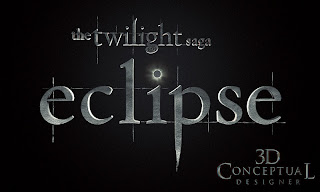 Round 1 was almost final for Twilight Eclipse, I just adjusted the texture mapping a bit and we were done.

Here is the final 3D Logo I did for Eclipse the third film in the Twilight series back in 2009.

Here is a quad poly view showing the scene layout with the 3D welds re-sued for each film.

This is a combo Ambient render and screen capture showing the lighting set-up for the aura around the full moon eclipse. 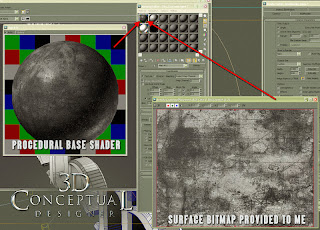 The texture map breakdown shows the procedural base material with the supplied texture map from the Art Director, Joseph Stamper.


I had the great privilege of working on all four Twilight ad campaigns, and today I post the work I did for the finished 3D Logo for the third film Eclipse done back in 2009, A bit out of order as I have posted the others already here so you can search using the Google toolbar up top on the LEFT..

Early in the series I had the room to experiment more with the look and feel of the logo, and we did a whole lot more variation and 3D sculpting, but as we moved forward they wanted a simple extruded logo so that is what I did.

On this third film in the series, I only did two versions of the logo for Joseph, and the only change was the scale of the texture map used, was made ultra small for a fine detailed look. The main 'gag" so to speak was the full eclipse of the "dot" in the letter I. I back lit the 3D scene with 3 different volumetric lights to get the aura feel correct around the moon. I also combines a Procedural texture and photographic color to achieve the look needed for this third round.

You can view PART I for the first film here.

You can view PART II for New Moon here.

You can view my 3rd post for Breaking Dawn HERE.