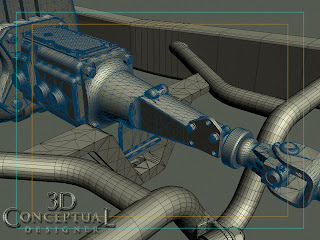 A 4 Speed Transmission in detail on the Deuce 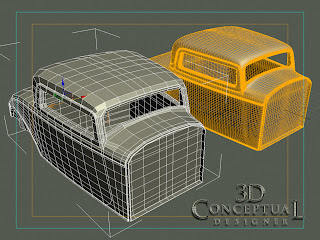 The only Sub-D Quad surface was the body itself, all else was built using nPowers, PowerNURBS. 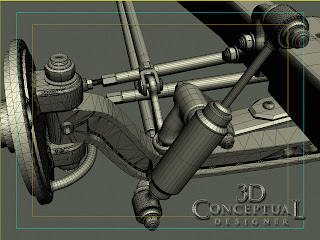 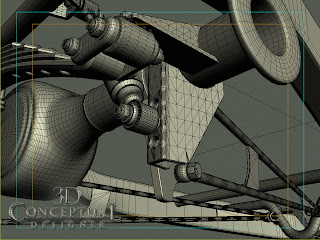 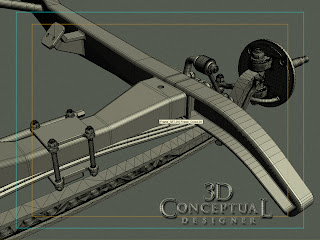 The front frame member details showing the inside of the rails on the Virtual Deuce. 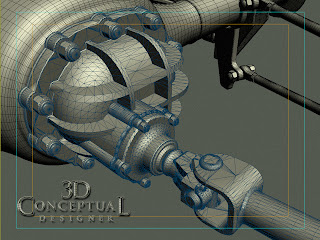 
This is my second post on the Virtual Deuce[ 1932 Ford] coupe I built as a test car for paint and lighting and pitches, and today I have some older screen caps I wanted to post on the Deuce Coupe I began building back in 08.

I wanted to have a set of very detailed Hot Rod parts for a few resons and I decided to use this project as a test bed for these tasks.

Once it was all done I wanted to use it to test Photoreal rendering of cars, but I also wanted to test out modeling something bolt by bolt with every detail in there. This was to be used to help sell my automotive srevices to clients, as we found that being a "motorhead" was benifically in automotive accounts as there was always a hot rod fan on the teams when dealing with the subject matter of cars, so having this, it helped show off our comitiment and passion for the craft.

As you can see I have not touched this for a while, also this was built using BREP nurb surfaces so it is high rez only model except for the body shell you see above, the only Sub-D quad part in there.

Actually I posted this years ago and someone commented that it should be all quads and that was inspirational to me to convert all modeling over to quads, and my speedster is an example of that style.

As I stated in my prior post here, hopefully someday I can finish it up.