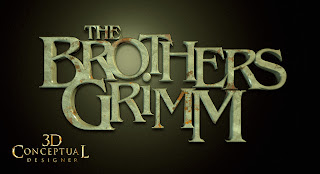 A Metal 3D Logo based on a design by Chad Robertson for The Brothers Grimm.

Here is an alternate 3D Logo for The Brothers Grimm with a slight reflective surface indicated below the render.

Rusted metal no a metal wall in this design concept I presented back to the Poster Design Division. 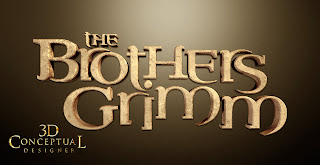 A cool blue-green metal render done for a design from the Art Directors. 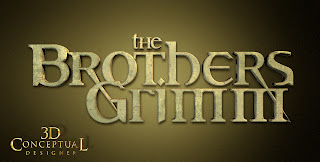 The final Grimm Logo design I did in 3D for the project.


I did a about two days on designing 3D logos based on Illustrator files given to me in my little 3D Department over at The Cimarron Group, back in the spring of 04 on The Brothers Grimm for the Theatrical Print Department.

Most Logos were done for Art Director[AD] Chad Robertson, but I also did a few for AD, Joseph Stamper as well. The AD's provide me with an outline path of the live font as an "ai" file to build it out based on the Vector file in 3DSmax for the comps. In max you build right off the 2D file, it becomes the actual first edge of the model.

I rendered every 3D design twice, so the AD's could paint in Photoshop between the rock material version I did of each, and the scratched and rusted metals version as a layer in PSD to adjust and blend. I did render a few in 3-4 materials as well, the sky is the limit with 3D textures especially with procedurals as they are mathematical textures and not tied to a picture or photo with it's limitations.

Posted by 3Dconceptualdesigner at 12:44 PM