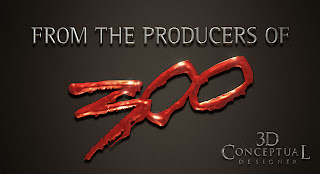 Here is a Motion Graphics 3D card I built with a blood painted "300" for the trailer reference. 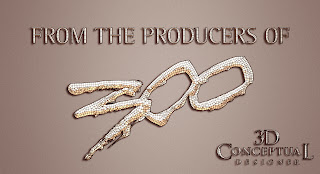 Here is the quad-view of the mesh with the Turbo-Smooth shut off to see the base mesh.

I built out the font that ended up finishing to match a print look that was provided to me, though that was a 3D fake done with Photoshop bevel-and-Emboss, so I emulated the actual 3D sculpt above.

A font look I did when they were still experimenting. 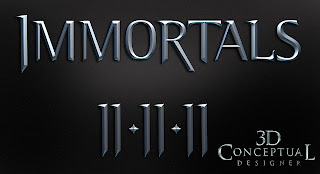 The final 3D card layout that became a full alphabet below. 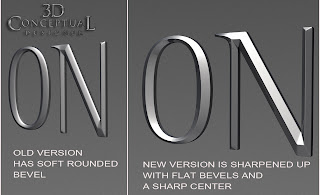 I made some adjusting to the font to sharpen it up as the first pass was a softer bevel with rounded corners and a convex bevel with a nice highlight section. 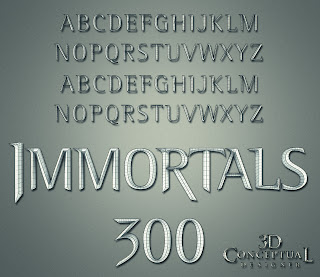 The quad view of the full delivery of an alphabet in 3D ready to go. 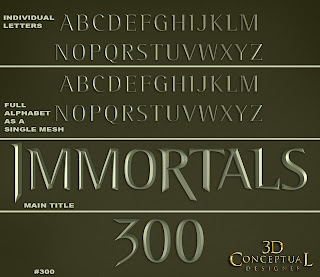 Here is a quick render shot of the type sent as a final delivery with a simple shader to test the surfaces via the reflections, an old car designer technique we learned a ACCD.

I had a very busy late last week, so I did not get to post part one for this, so I've combine two post today.

I regularly build out 3D assets for a few Motion Graphics clients to use in their trailers, and I did a series of 3D single-Point-beveled hand modeled fonts, for GreenhausGFX for this purpose for the film last year, The Immortals.

It started with a few cards for the Motion Graphics team, so I build the type all subdivision, as a full quad model, so that when it is taken into Maya or C4D as an Export, they can add the mesh subdivision modifier on their end, to have a very lite file size during animation, without compromising the level of detail with smooth modifiers as needed for close ups , and fly-thrus.

You will see a few fonts were tried up front and once the final was picked, I ended up doing the full alphabet for the film.