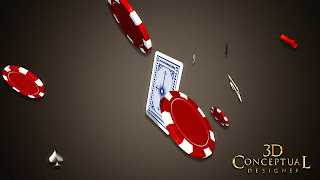 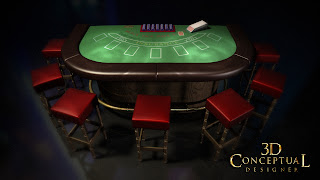 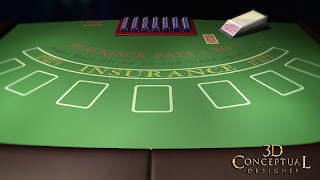 A Player POV[ Point of View] shot for a menu. I was ready to animate cards etc. 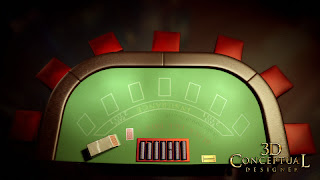 The overhead move down to the table felt is seen here in the opening frame of a proposed Style Frame. 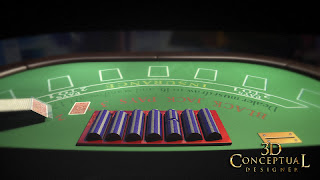 A Dealer POV shot for the Blackjack game done for the presentation for, 21 the film back in 2008. 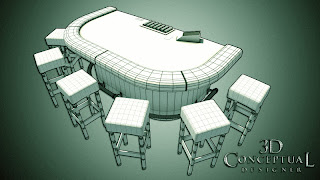 Here is a shot if the blackjack table built fast and dirty with only the padded rail done in quads.


Back in the fall of 2008, I was still in-house at The Cimarron group, and got to work with Hesham Morsy, on the Blue-Ray DVD menus with him as I did on, "So I Married an Axe Murderer" the prior year. I have worked on a a couple dozen projects with the AE[ After Effects] team on Home Entertainment over the years, always a pleasure.

For this project, I provided two parts; First a 3D animation sequence in HD of flying poker chips, cards, and Playing Card Icons of Hearts, Clubs, Diamonds, and Spades, and Second a Blackjack table interface for the menu itself.

I built out a fast and quick model of the Blackjack table game, as the budget was smaller, as they had been each year so 3D got squeezed out of production over time, but it was sure FUN while it lasted. I reused some stools from the Felini's Model I built for the owner of Cimarron, and the chip was a reuse as well, but the piece was scrapped, though the 3D animation transition I did, was rendered and put in the final.