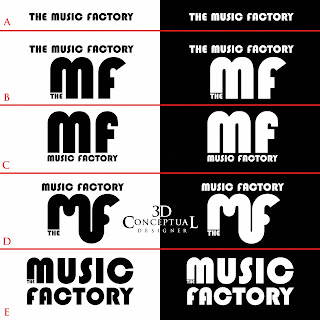 The first pass at the 2D Logo Design Explorations Side-by-Side Black on White and vice versa.

The adjusted finals with the new name adjusted into the design. 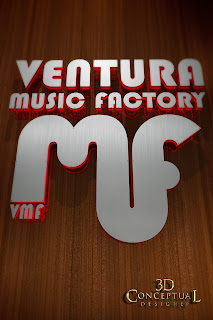 A straight on shot of the final concept rendered out in 3D for the laser cut sign for the Lobby. 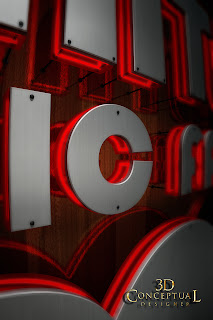 This close up renders shows the basic construction proposed for the Aluminum Lucite and Neon sign concept. 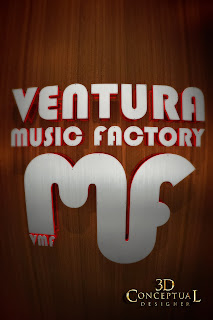 A fish-eye down shot render of the 3D Virtual representation of this Architectural sign. 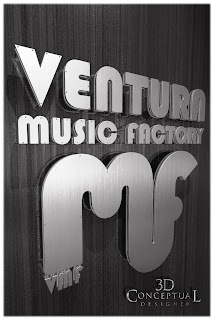 A 3D shot I did in black and white as the design was bit retro and I wanted to see it this way.


Back in 2011 I did some quick Logo Development for Alex Urban for the Ventura Music Factory, a Music Studio based out in Southern California. I had worked with Alex at the Cimarron Group years earlier so he contacted me to assist.

As with all 2D design projects, I first do the simple 2D designs in 3D vectors and put them as both a black on white, and white on black side by side to compare them, and to see what reads the best and fits the design needs of the client.

Once a direction is chosen, I develop that a bit more,and in this case the name "Ventura' was added into the DBA so I adjusted the design to fit that in.

I also did a 3D representation of the design  as it would be seen on the studio wall in the lobby, with a nice brushed aluminum sign face that would be laser cut,with a Lucite plex boxed in extrusion on back spaced away from the way to spread the light a bit more, with the internally lit thin neon tubes. All this was fastened with button head black anodized shafts into the mahogany wall surface. A few 2D renders at various views representing this were produced.

A fun little less than a day gig.

Posted by 3Dconceptualdesigner at 11:52 AM