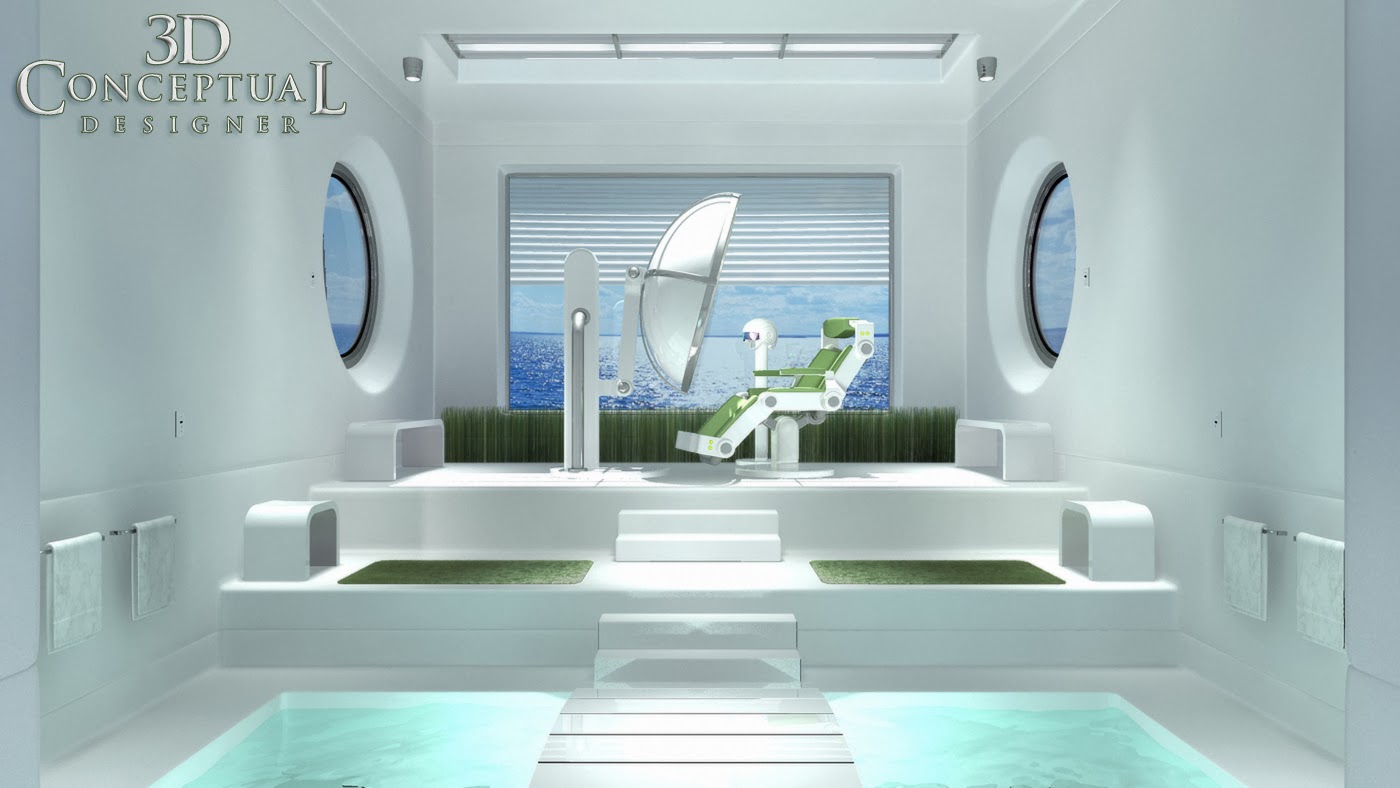 Here is the 'Hero' shot for the Mindroom Spa Client Private Session Room. 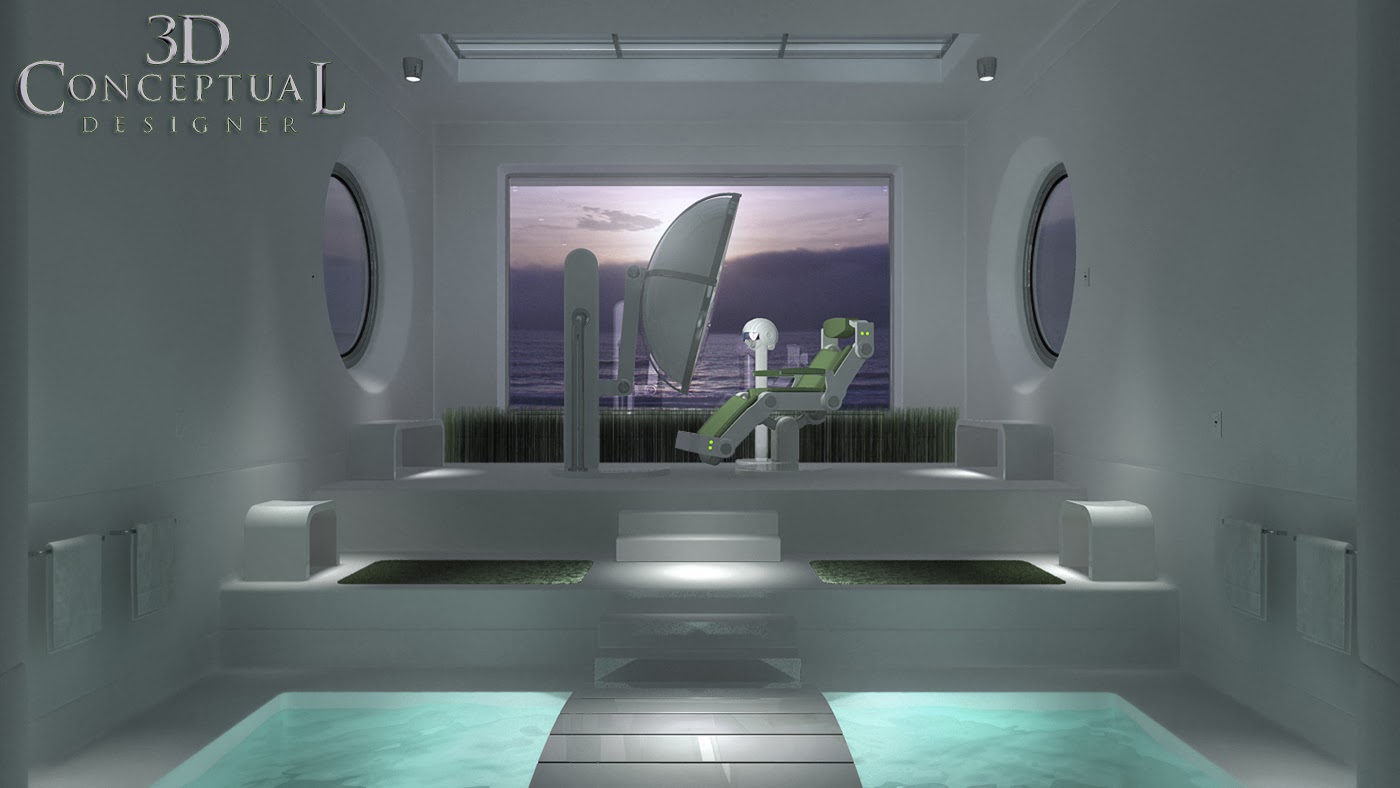 I did a nite shot as well at magic hour with the sunset out over the ocean as these facilities would be located in exotic locations worldwide. 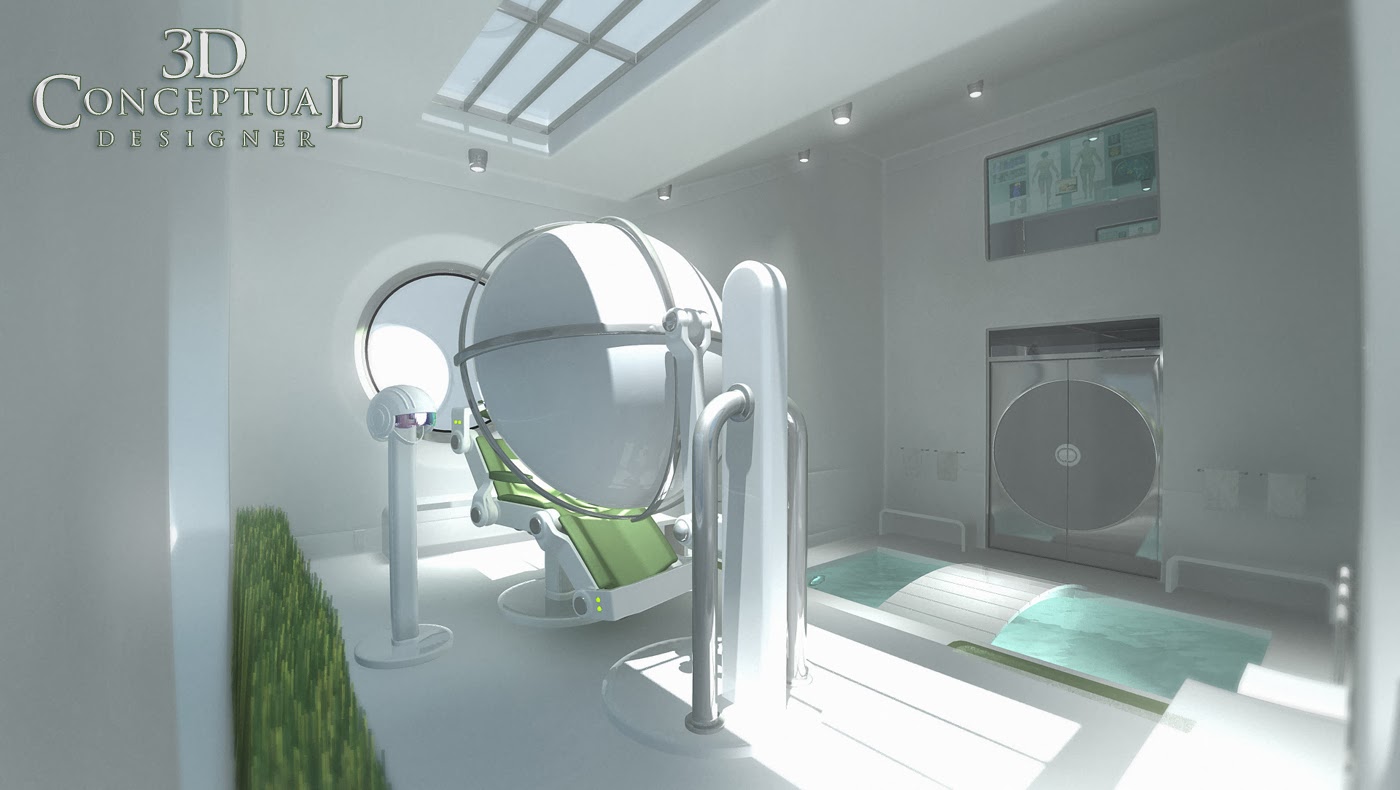 A shot from over near the wellness table and VR dome looking back to the entrance. You can see the Doctors bay up top with the touch screen glass. 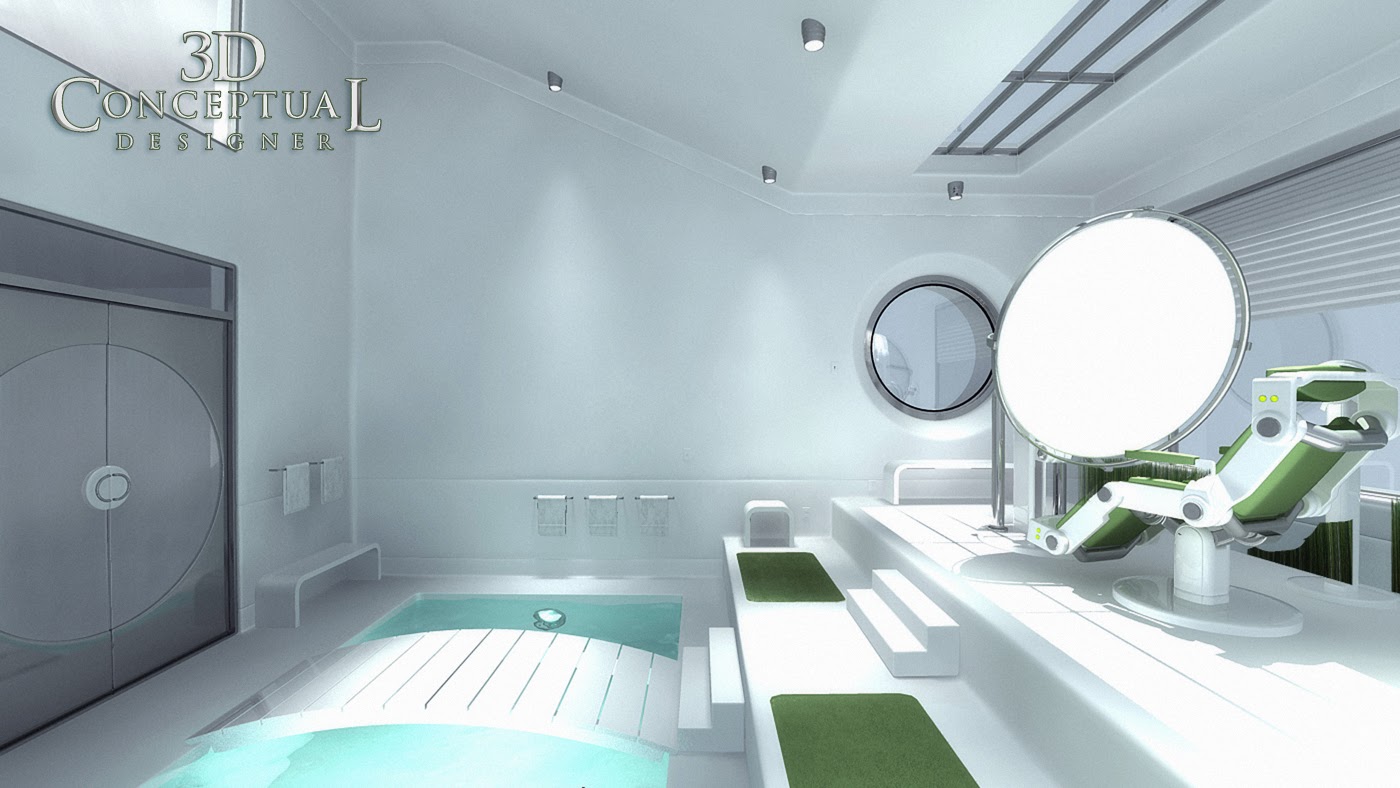 A side view in the patient room with the spa area to fully relax as you prepare to heal he mind. 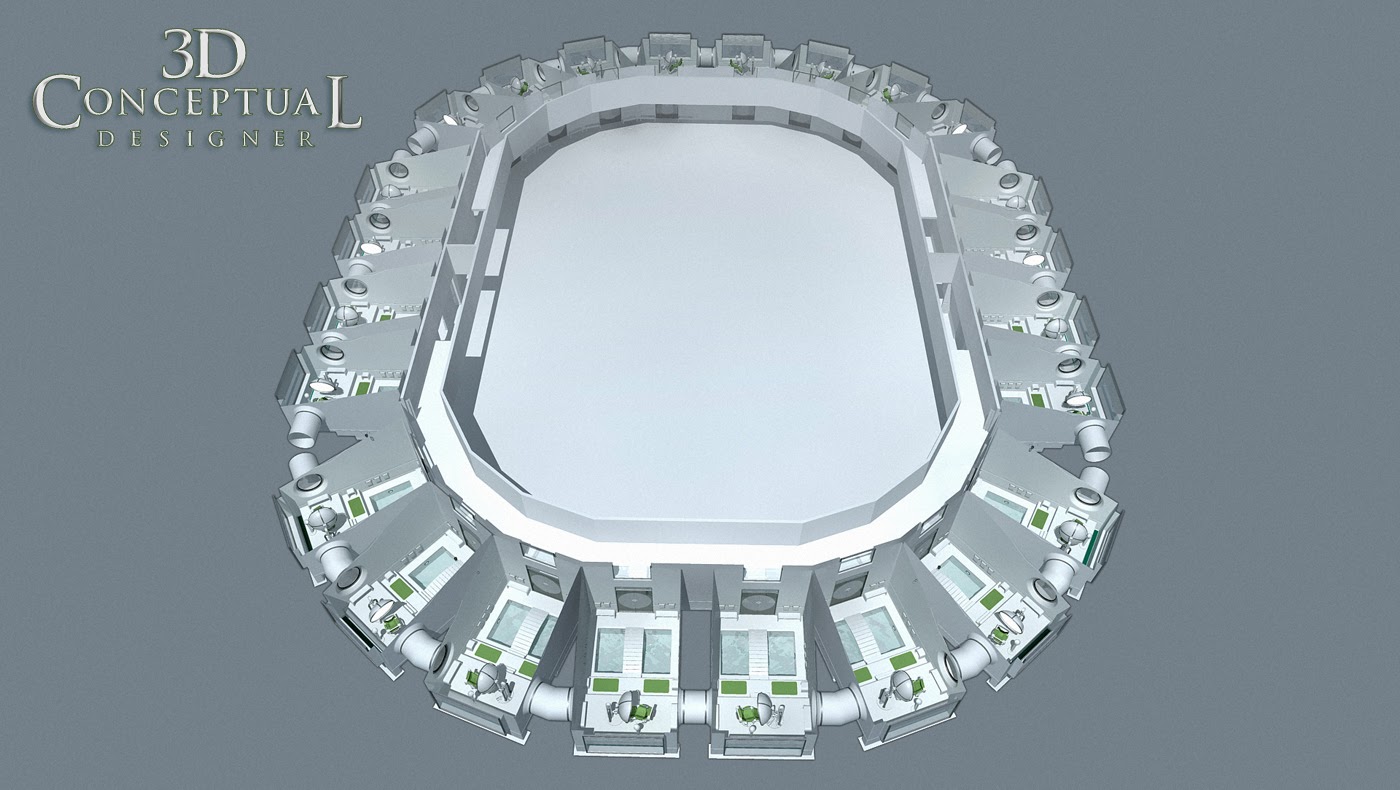 A big configuration with multiple client private rooms as a cut away of a floor that would be typical for this Medical technology. 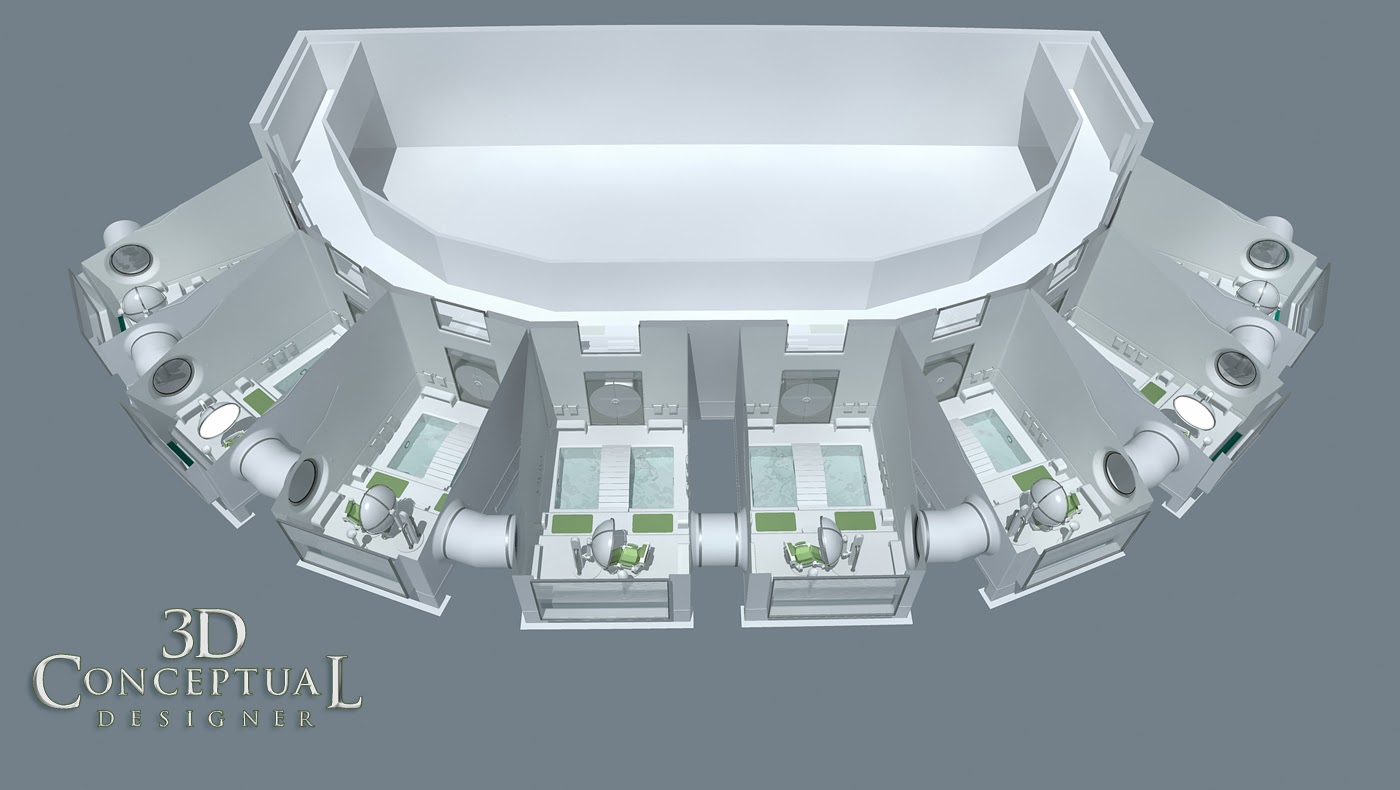 The smaller version  of the Medical facility layout.

Back in 2009, I was able to work on a very exciting project that was a combination of Architectural Design, Product Design, and Graphics for a State of the Art Medical Development for a technology called, The Mindroom for Dr. Michael Mark out of his Beverly Hills California clinic.

The technology was an existing procedure that was to get a serious facelift, as it was beginning to grow in both interest and use. This tech in a nutshell helped train the brain of athletes as well as other disciplines to control emotional responses in order to increase abilities, both physically and mentally and to facilitate growth and healing in both. It was used over in Europe by World Cup players with fantastic results, so my job was to help visually brand the product for a larger worldwide audience.

Today in PART I of many posts, I cover the basic Higher end spa design I created for the presentations. The Main table was an industrial Medical table that reconfigured into a chair or bed so the patient could be placed comfortably in a position to view the 180 degree panoramic VR[ Virtual Reality screen that would be lowered around the head to fully engulf them in the experience.

In the coming weeks I will be showcasing all the various parts I designed including the Neurological Helmet with jelly sensors seen on the stand, the table itself, the rooms, and the various areas and use scenarios for the technology beyond sports.


Cheers, THOM
Posted by 3Dconceptualdesigner at 9:25 AM