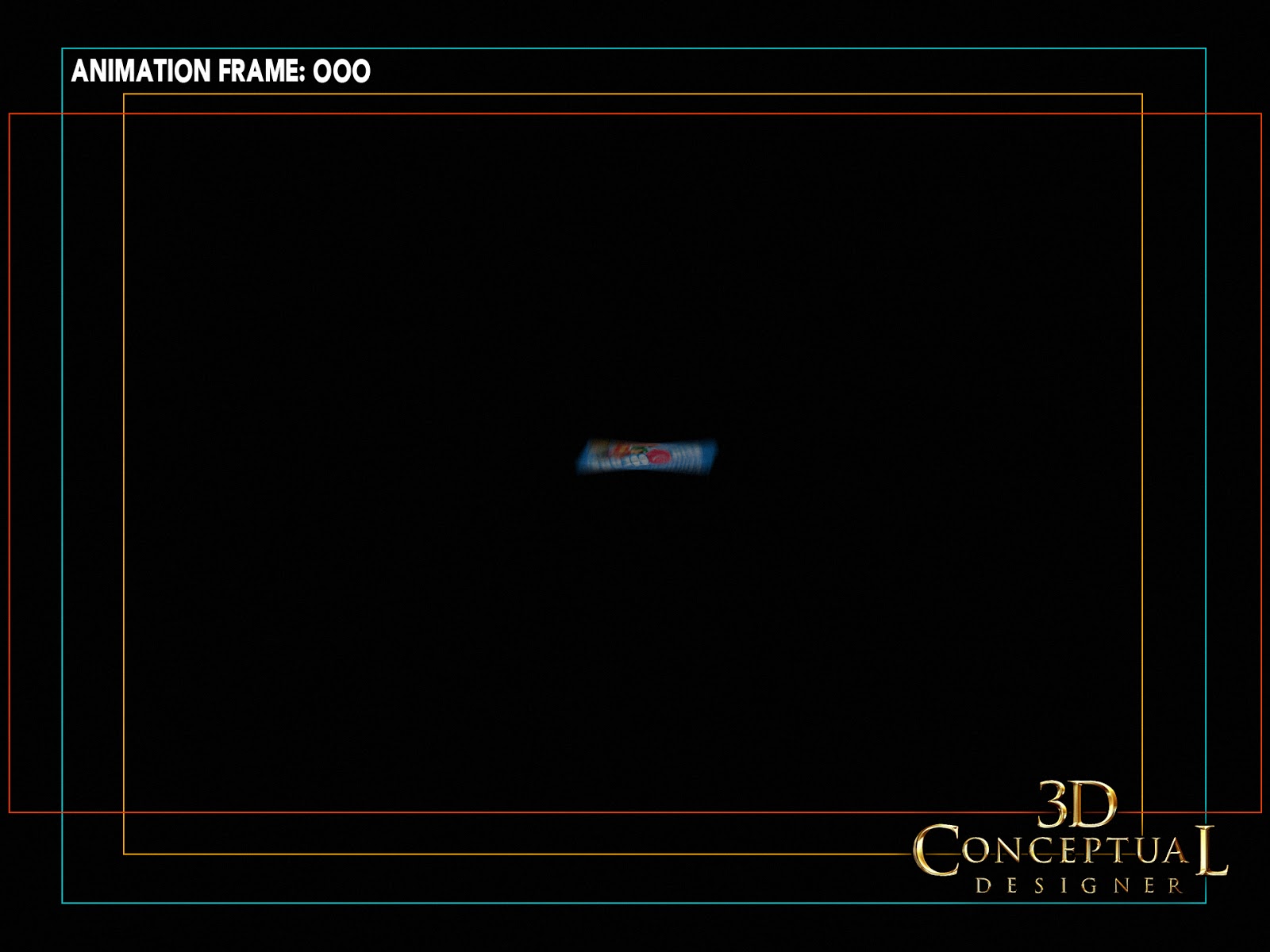 Frame 000 in the 120 frame sequence I rendered out for the Air-Heads candy that tied into the film Alvin and the Chipmunk:The Squeakquel. I used 3D motion blur so that the spinning and tumbling candy would have the blur track correctly off the model itself, and not be a 2D fake done in post. 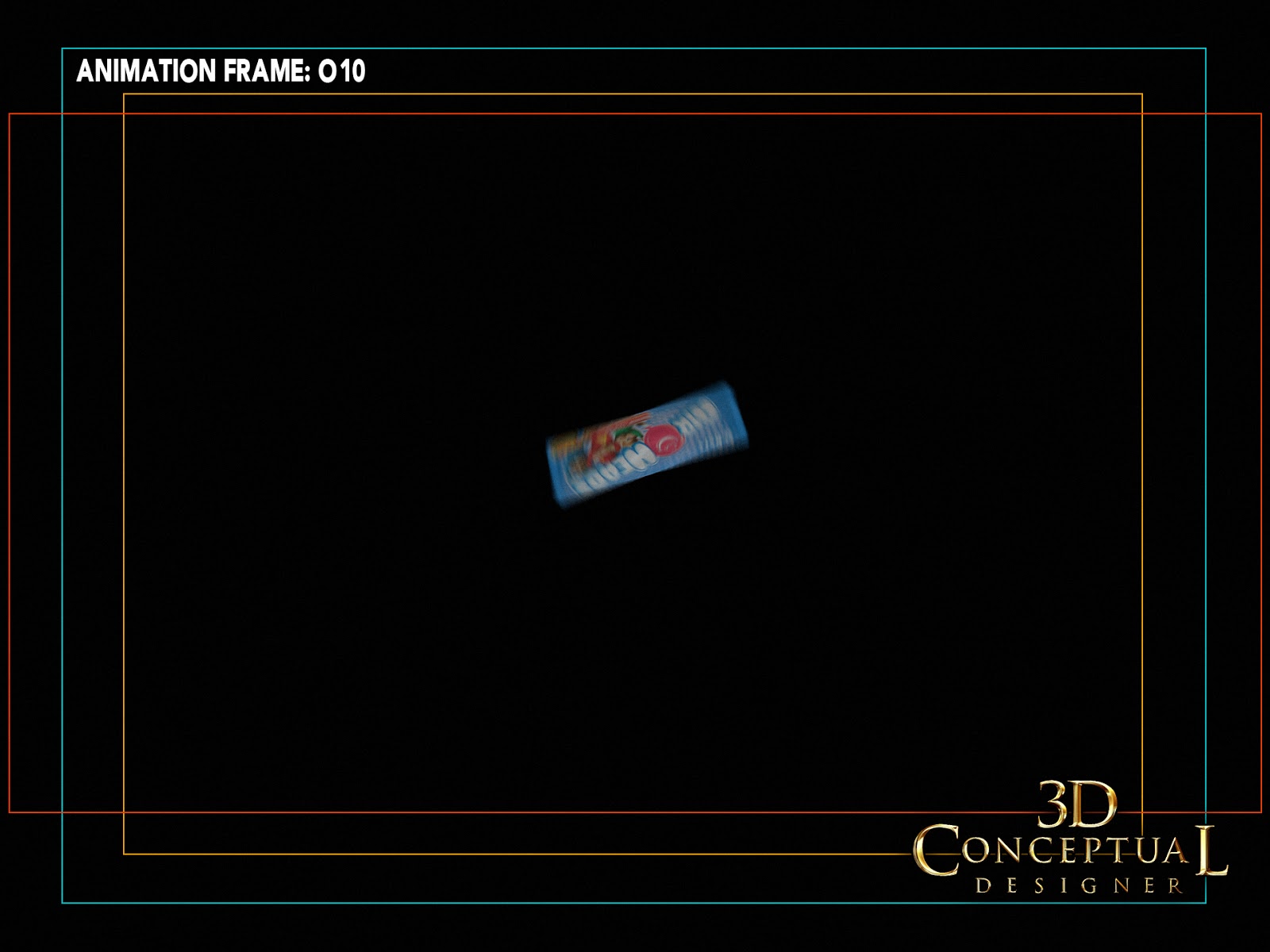 Ten frames in the spinning bag of goodies is moving at camera. 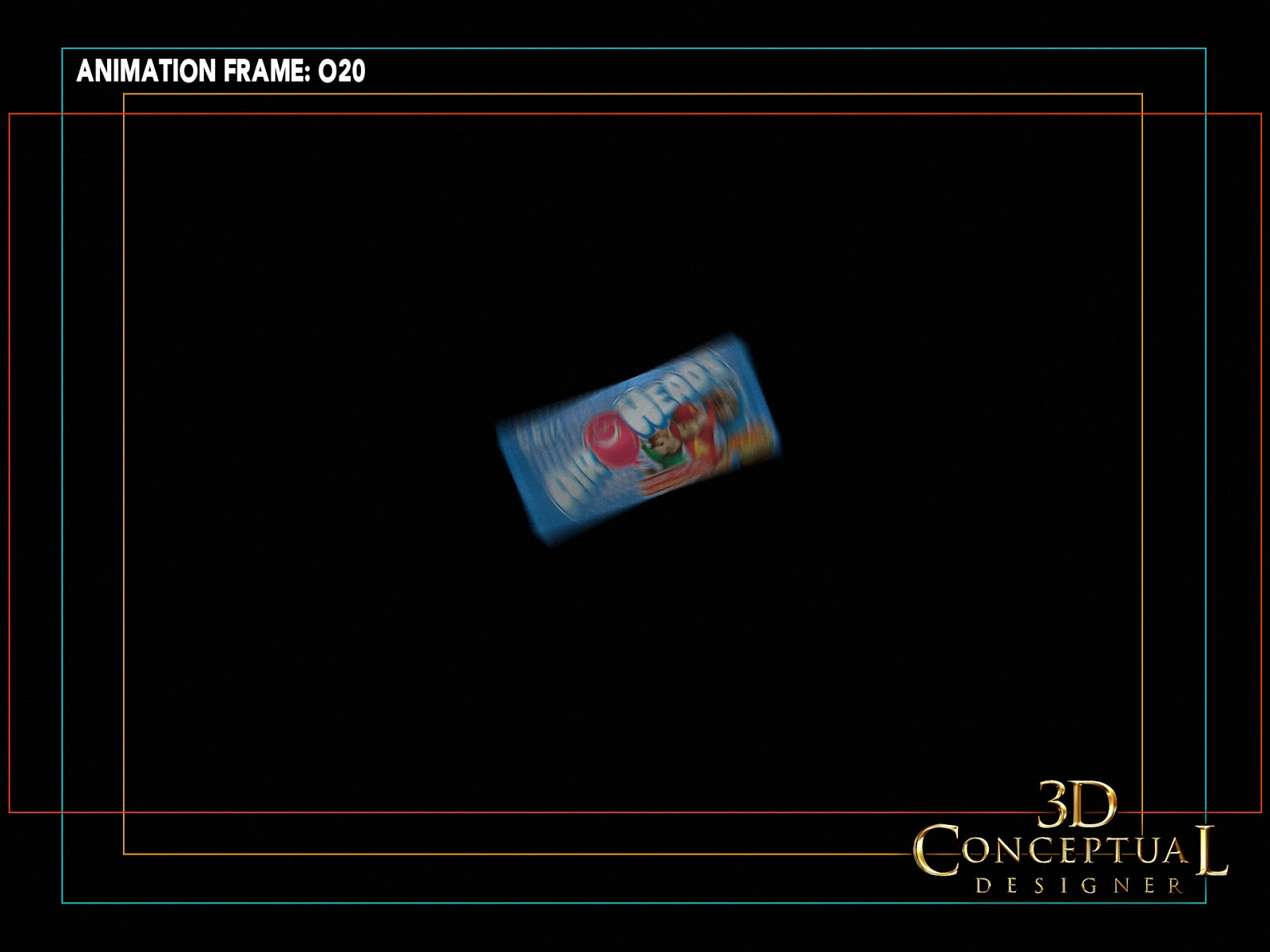 By frame 20, less than a second of time into the spot, the virtual 3D model of the bagged candy is doubled in size, a fast slam with a twist. 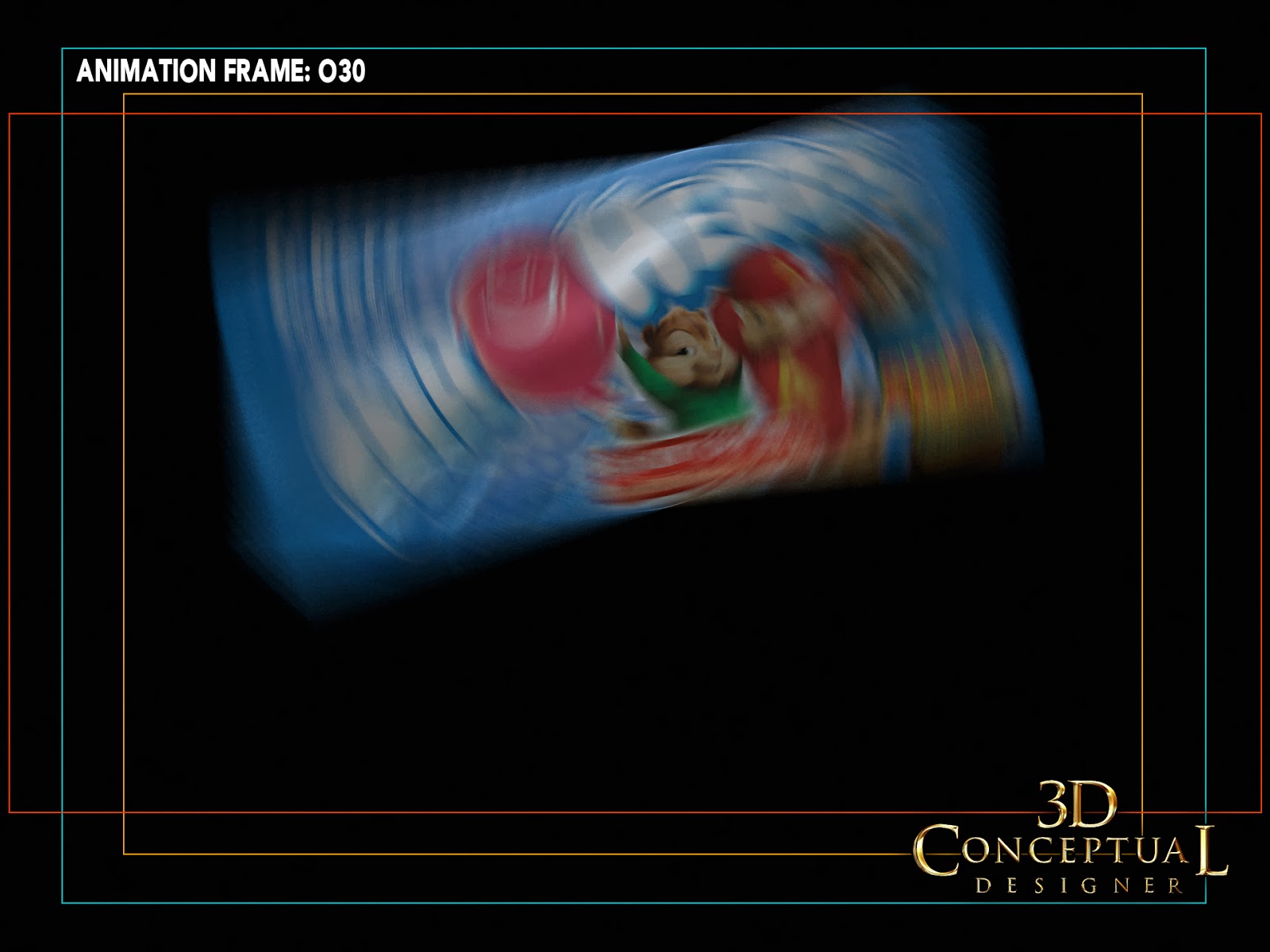 By frame 30 the bag is in full view in the frame but still spinning and thus blurred. 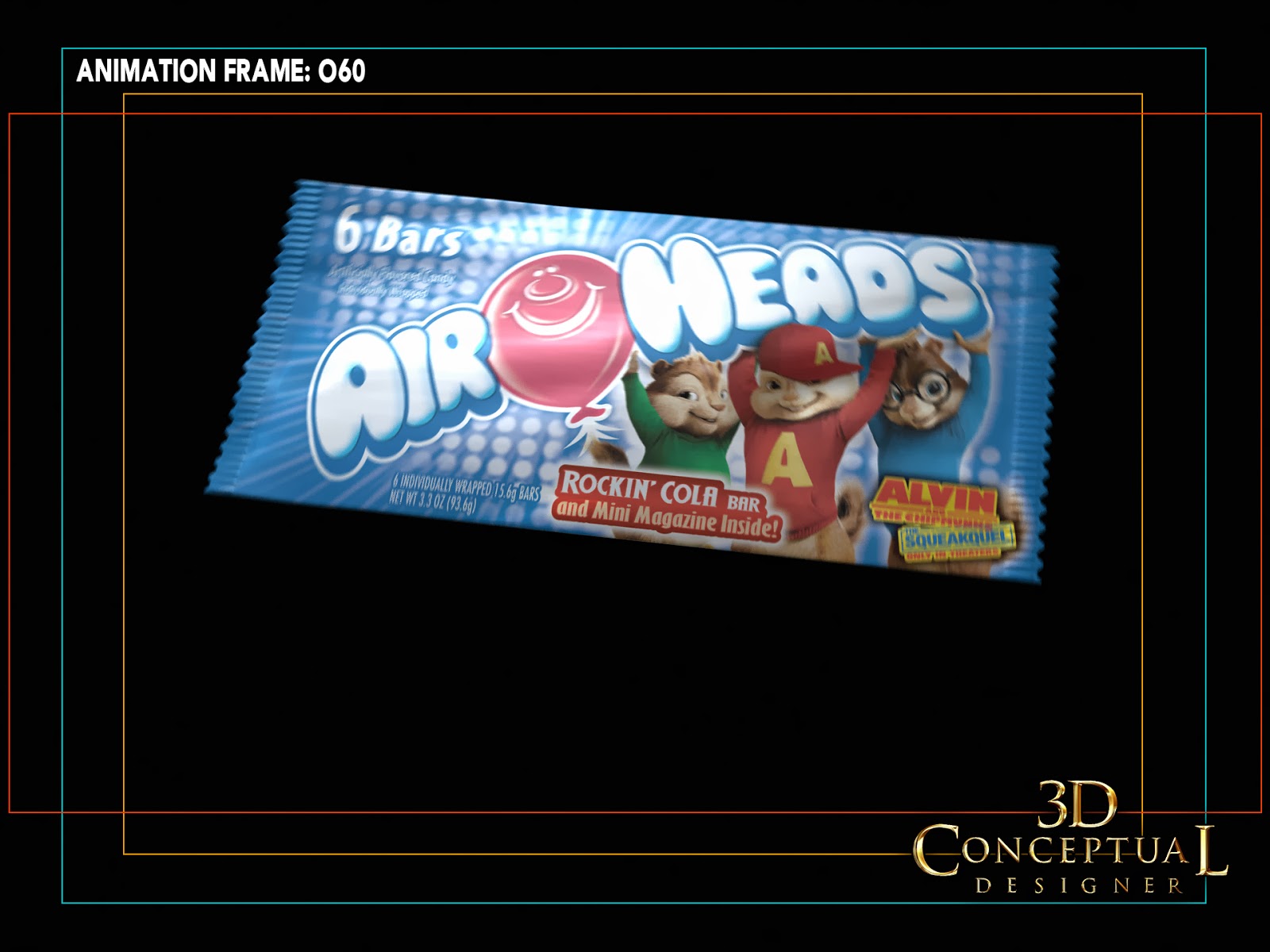 The move slows down to a gently rocking back and fourth motion in camera view above. 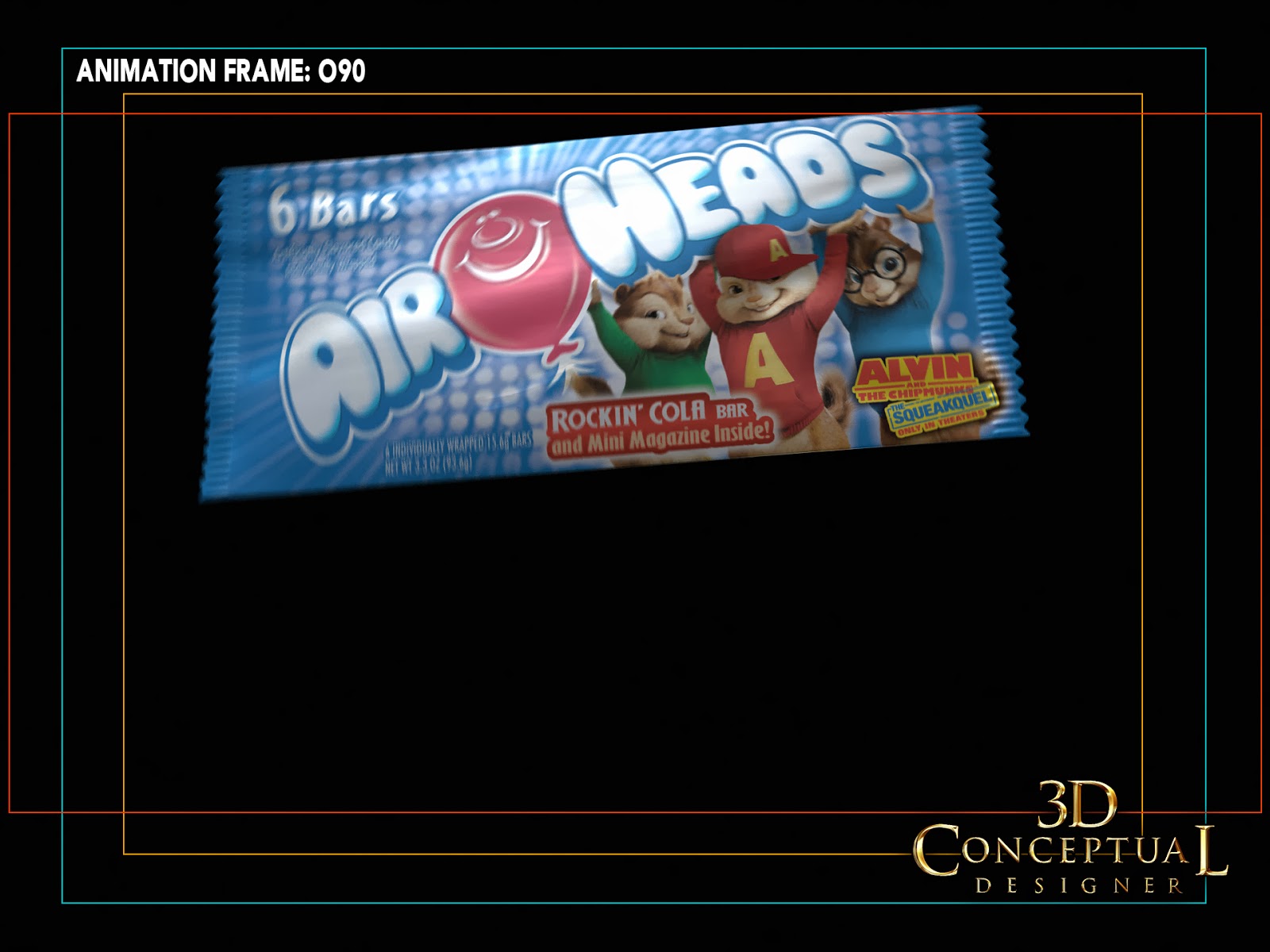 The light was animated as well, so that the speculars would shine off the graphics with the map adjusted to get light glints of motion in this soft slow move. 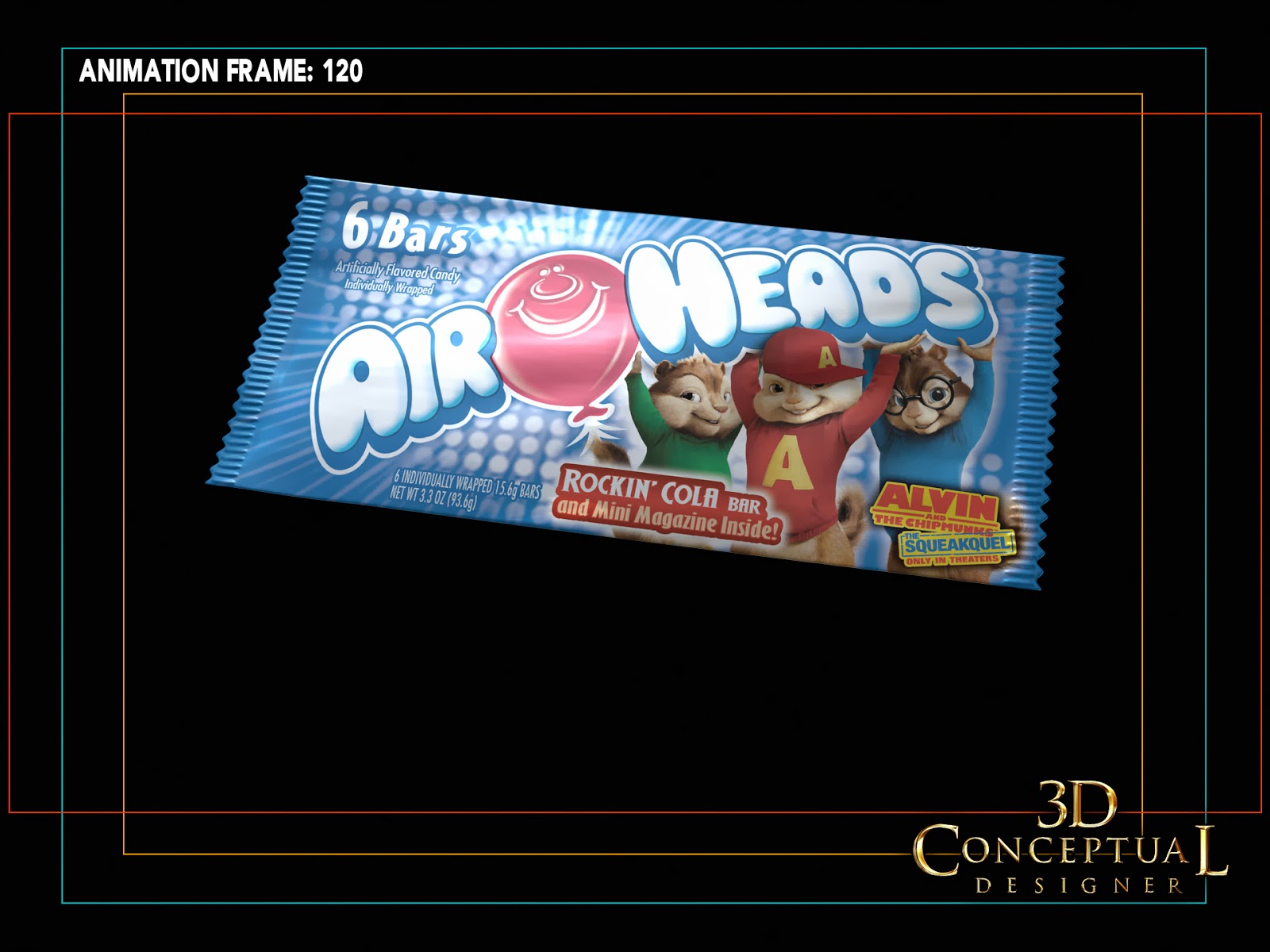 The final frame was justified up to keep the lower third open for type graphics as well as to line up with the foreground plate provided by Rhythm and Hues who did the characters for the films. 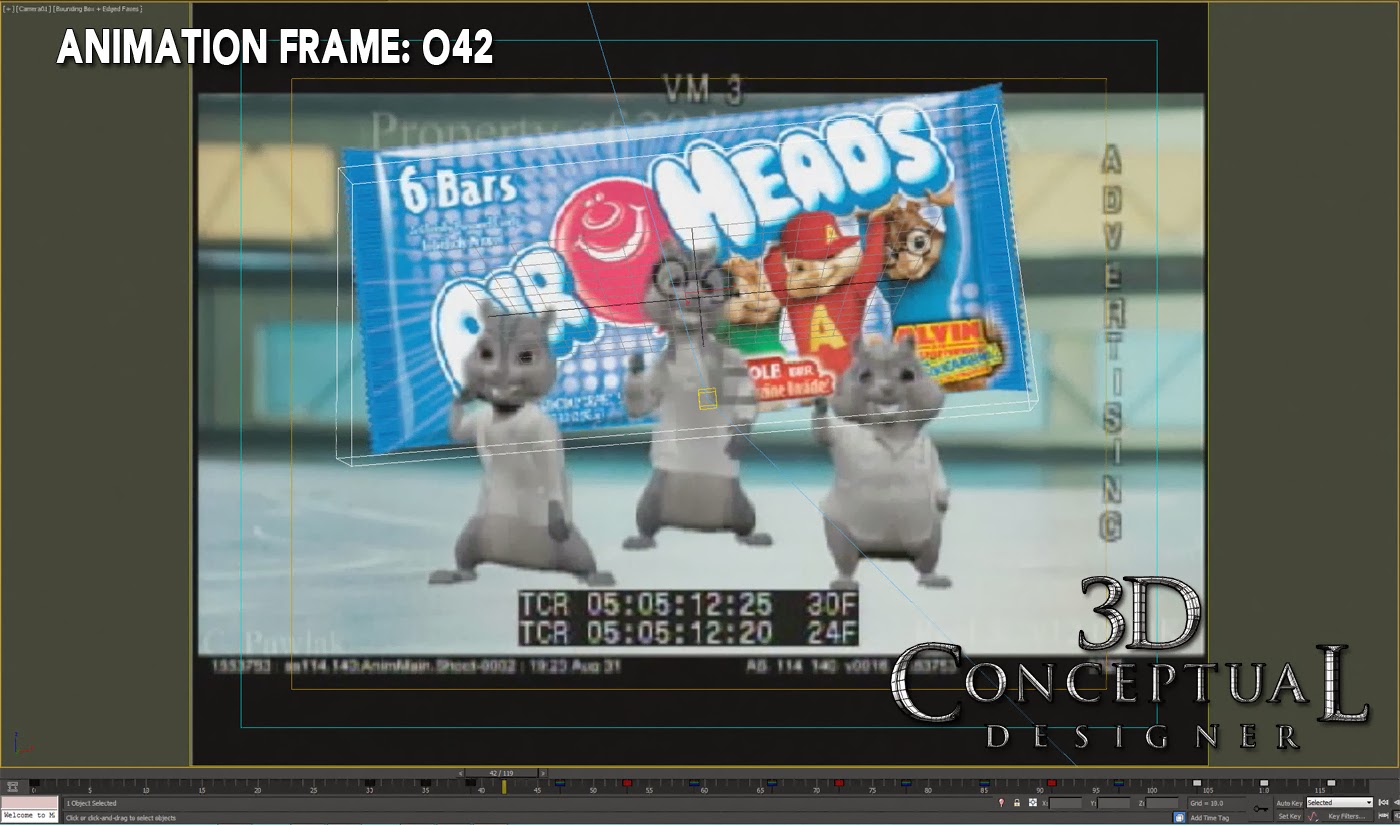 I was given this screen grab frame to align my shot to for the animation I did for the Alvin and the Chipmunks :The Squeakquel tie in spot. 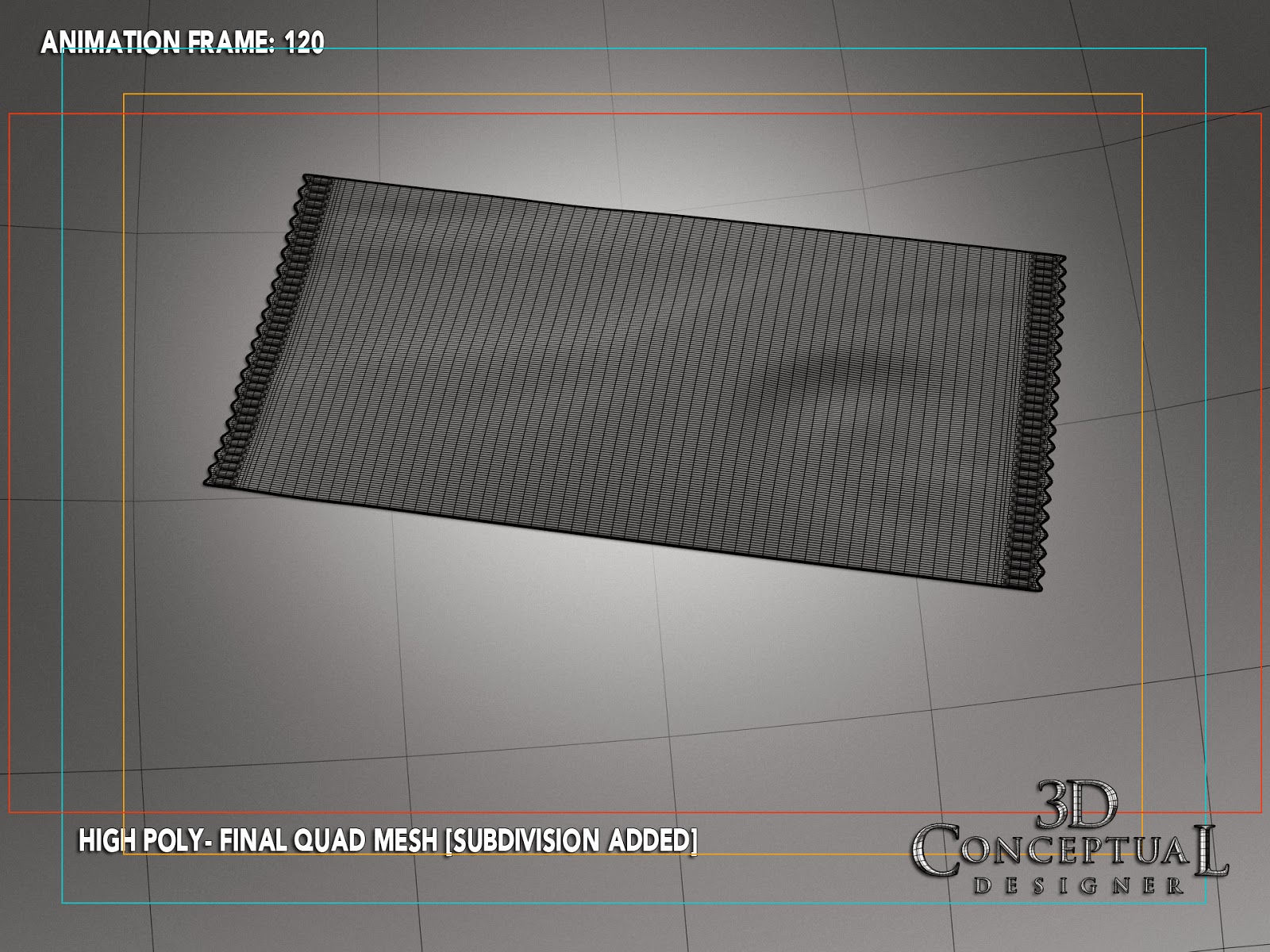 The subdivided mesh as used in the spot was only needing one level of subdivision since this was finished at SD and was never brought any closer to camera, though the model allowed for more resolution as it was a quad model. 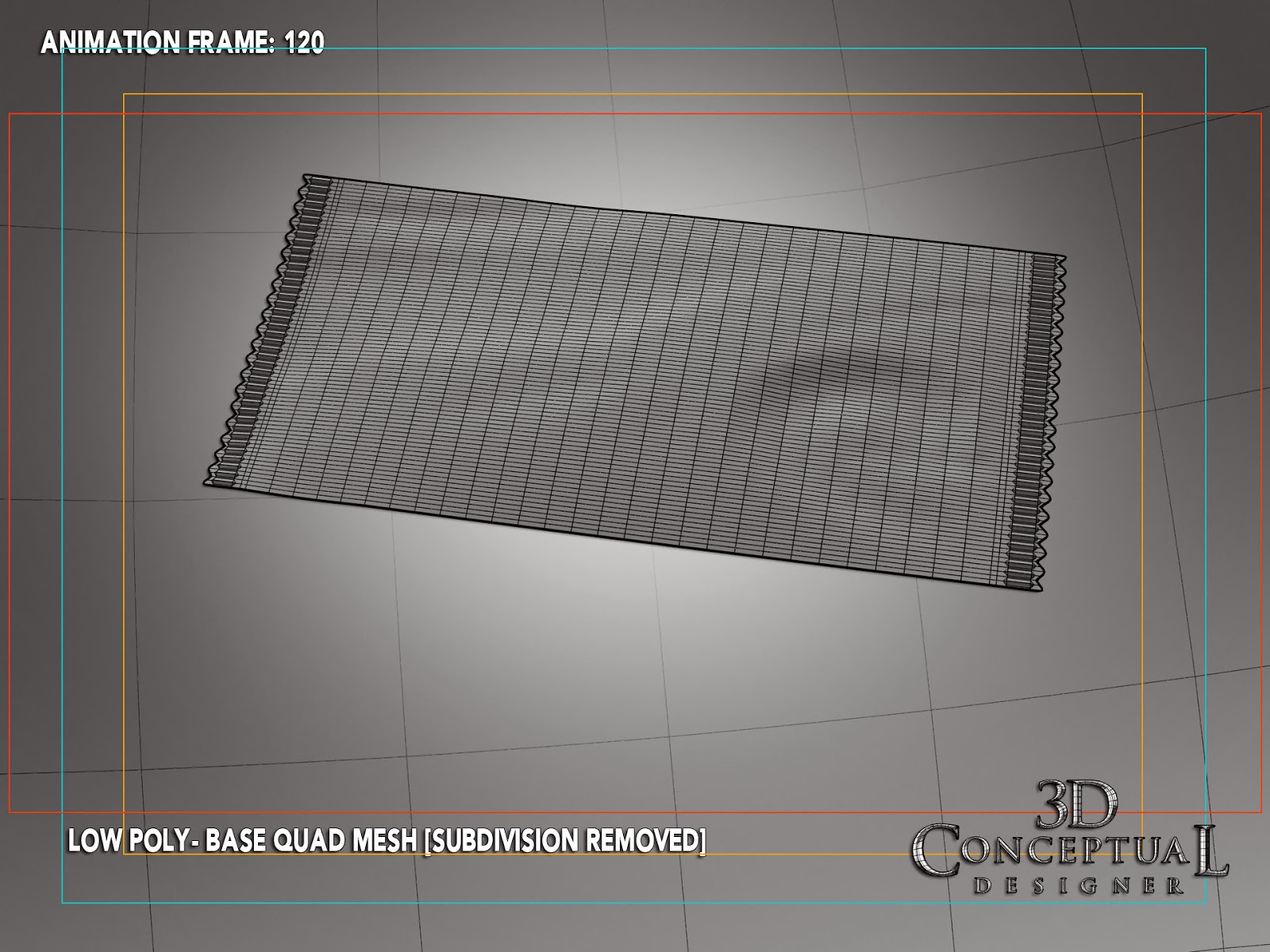 The base model I made for the package with subdivision remove to show the base build.

Back in 2003, I was hired by Roland to head up the 3D Design Department when he was then still President at The Cimarron Group back then, so he understood what 3D was best capable of, so he contacted me to help visualize some 3D assets for the TV spots to tie in the candy with the film as he had moved over and created his own company Toy Box Entertainment.

I was given the actual candy and wrappers as well as the the printers filed from packaging to create a virtual candy bag to animate for the spots. I first built it out as a polygon subdivision model so it could be subdivided for close up shots, as you never know what a client will ask for, and to create the asset to accommodate this level of detail up front means that in foresight, you build it out only once.

I then created the various maps needed for the file and proceeded to do some test renders with and without 3D motion blur. The asset needed to be transferred over to other 3D platforms, so I also prepared and exported it out as a FBX and OBJ so the internal 3D team had use as well.

A fun fast little gig that was under a day of work total for building and testing out the animations to delivering the exported geometry.