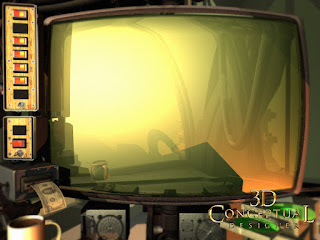 The First round design was a conglomeration with Retro parts mixed in with vintage Iron Victorian frames holding PC's and digital equipment. 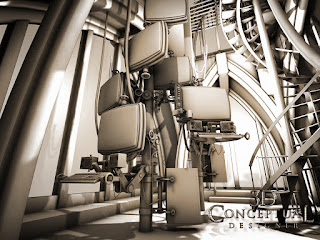 Here is an ambient render from the Launch City redesign with the camera pulled back to reveal the Tech Tree sitting in the center of this Gothic Attic. 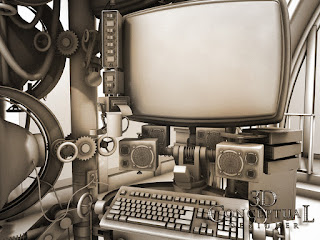 Each workstation had various apparatus that was needed including payment, music, storage, volume etc that flanked the screen. 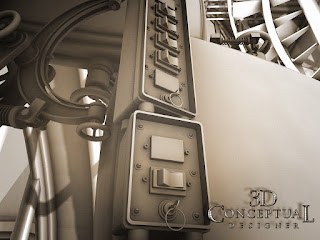 A close up shot of the little details that make up a single piece in the scene. I have block off plates in the switch panels to mix it up a bit and make it feel  more built from what was at hand, rather than full custom. 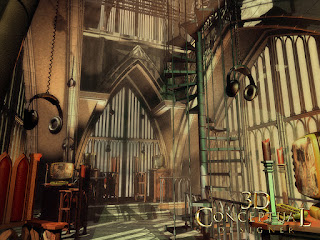 The final revised version was a whole lot more Gothic for the room, with a very simple iMac-ish single bubble design PC sitting on an old Gothic Table. 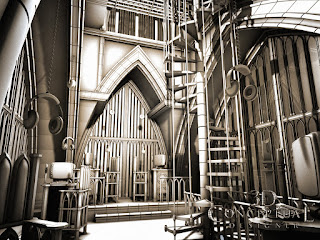 The ambient render shows the basic parts built out for this scene for Launch.com 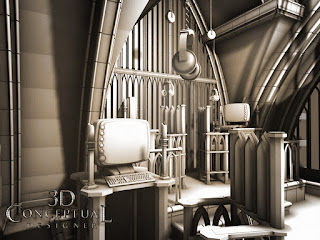 This Close-up shows workstations in the background area of the final Vibreaker virtual set.

This is my 11th posting on the redesign work I did back in Y2K on LAUNCH city for Launch.com, and we look toady at the Vibe, or what became the VibeBreaker Gothic Cathedral center stage in the city.

Launch was known for it's at the time revolutionary Music portal to play internet radio that learns and plays what you like based on your selections, so they wanted a location in Launch City where they could introduce the player App within the CD ROM-zine, so we picked this location.

Originally  went full Gothic as I was hired from for my Theme Park Experience and they wanted to fully "Theme" every location virtually in the city, and the Gothic Cathedral was a perfect location for this. I built out an interior set of the upper room and outfitted it with a steam-punk PC music compute tower in the center of the room. For the screen close up I utilized Old School and New tech with toggle switch panels for the 60's CD ROM players from the 90's etc.

As time went on, they simplified the interface to be 100% on screen so all PC parts were scrubbed from the room, and it was a bit bland, so I embellished the Gothic details out to a much higher level  for the final, with more trim in the windows and frames, as well as adding in Gothic furnishings to hold the modern tube screen interface we would zoom into.

I have many posts covering the various locations that we sold off as virtual real estate to advertisers, with all the links below to my prior postings.

To view PART-IV- The Dockside Diner, then look here.

To view PART X-The Streamliner Train Car, you can go here.
Posted by 3Dconceptualdesigner at 11:47 AM