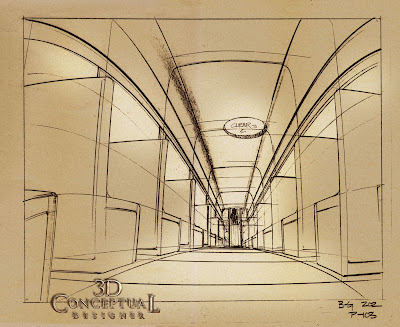 Here was a layout that I added some more curve to the lens when I sketched it out, and The Phantom cuts a hole in the roof to enter the scene. 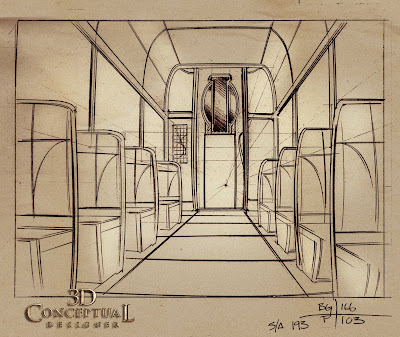 I also did a flatter layout of the same location with a shorter lens so that we could do some close up dialogue for The Phantom 2040 Premiere Movie. 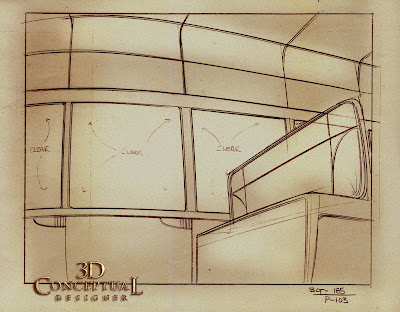 In this side view I moved the rows apart a bit as there was a fight sequence here. 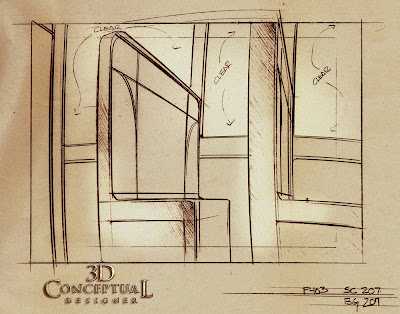 And then for this alternate side view I squished them together a bit for the B.I.O.T view to look a bit off. 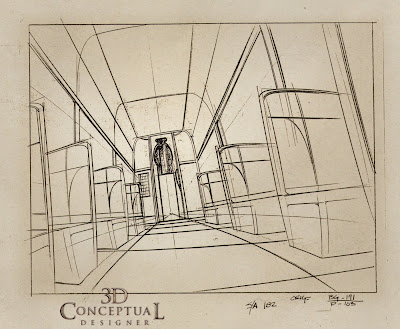 Here is a re-post of the establishing shot I provided for the Tube Train.
Phantom 2040-PART LXX [70th]
Layouts for the subway tube train from the opening film.
Client: Hearst Animation Productions.
Art Director: Myself.
Project Date Spring 1993.

In my 70th post on "The Phantom 2040" Animation Series I have some added layouts that I did up in Vancouver at our vendor while I was up there on a remote Art Direction Trip. I went to the layout studio we were using to help kick off the production, and I gave tutorials in curvilinear perspective so the backgrounds would be in a fish-eye and worms-eye configuration, and that they would be drawn using curves over a heavy use of a straight edge.

This is part of what I pushed in Canada, France,and South Korea as we used vendors in all those countries to help build the series.

When you draw the same set over and over you get familiar with the space, and you also get a sense of what can be adjusted a bit, and exaggerated, without a major departure from the original design intent. I had the advantage as I was that designer, but the thinking is sound as I have done this with designs done by my team as well.

Cheers, THOM
Posted by 3Dconceptualdesigner at 10:52 AM