Luke Skywalkers Light saber from the Original Film[IV] with the power ON. 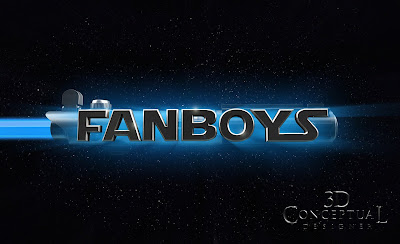 The Lightsabers getting used for a finish on the AV work for FANBOYS 2007.
STAR WARS TRILOGY DVD PACKAGING
Lightsabers.

The re-re-release on DVD of the Star Wars Trilogy packaging ended up using my Darth Vader 3D Illustration to blend into it, but early on, one of the first jobs I did for Cheryl Savala ,who was Creative Directing in Home Entertainment at The Cimarron Group was these Light sabers.

Always a fun project to build out Sci-fi stuff, and Star Wars came from my own childhood so the job was a pleasure.

As a Side the Model was re-used for the FANBOYS trailer and ended up being used for the trailers and was also put on the title sequence of the film itself.

You can view the prior post on the Vader Helmet here.
Cheers, THOM
Posted by 3Dconceptualdesigner at 9:41 AM