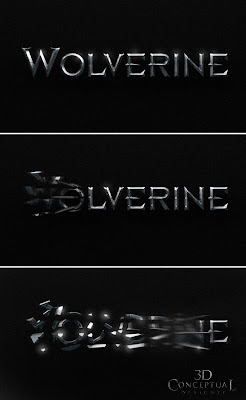 Animated 3D Logo for the International Finish for the teaser[ sliced by claws].

I did a small amount of work on Wolverine the spin of Origin story of the main character played by Hugh Jackman. Having done the finish logos for both X-men2 and 3, it was a natural fit.

The storyboards were for an international finish used to sell the film way early on in the fall of 2006. The big logos were for the domestic release of the film and were done 2 years latter.
Cheers, THOM
Posted by 3Dconceptualdesigner at 11:26 AM