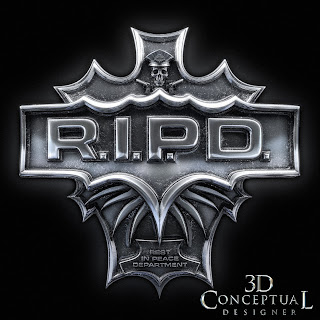 Here is the final Design presented for the R.I.P.D. Badge Concept for the Teaser Posters I built out in 3D. 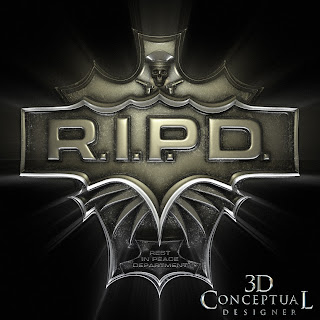 I did a warmer metal version with less dirt and aging for this one. The idea was to be able to paint between the two renders to get a dual finish feel, so the edges could be worn back to the brass casting etc. 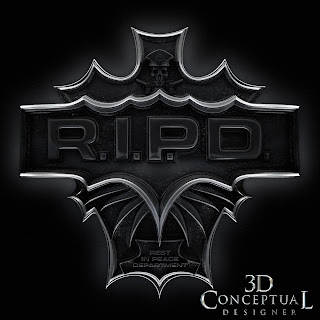 A darker version with a bit of edge lighting to it for RIPD. 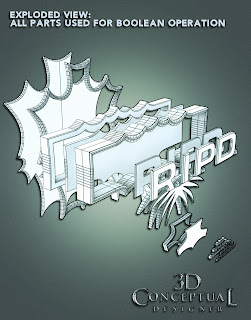 STEP I:
To create the badge as a single molded part I first create all the parts separately. 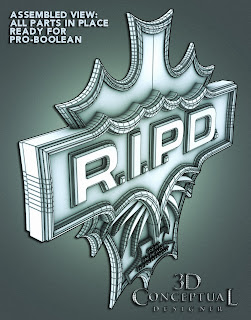 STEP II:
Here are all the parts placed and ready for the Pro-Boolean operation. NOTE: I always save this[ and all steps separately] in case I need to go back to adjust, since all Booleans are a bit squirly. 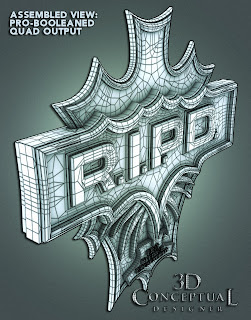 STEP III:
Here all parts are combined into one with the mesh output set to QUADS. 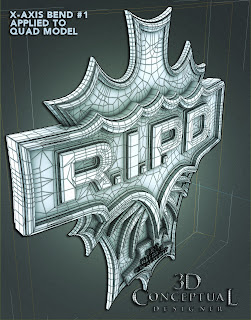 STEP IV:
A apply a bend in both X and Y directions to dish the badge. 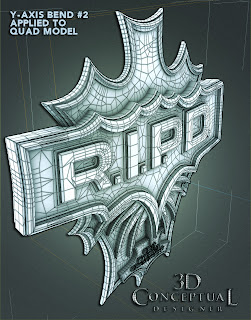 STEP V:
The second bend is applied to the modifier stack in 3DSmax. 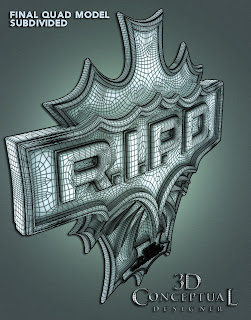 STEP VI:
The final design with the subdivision added[ here it is with one level, though the finals had 2] 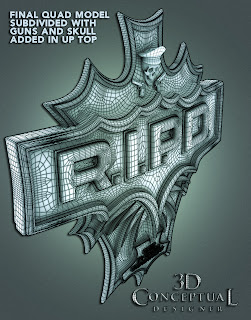 A view of the final R.I.P.D. badge design with the skull and cap with dual firearms added up top.

This is my fourth post on R.I.P.D., and my second for the Agency Cold Open. They were doing Comps for RIPD, and came up with a great design for a badge so they contacted me to create the 3D sculpted version for the teaser posters.

I received the vector outline files from Gardner, and we discussed the look he wanted to have with it so I proceeded to create the parts necessary to make the badge. Most quicker 3D models I make, are all separate parts and retain a very sharp edge in the parts themselves as well as at the intersections, but when you look close-up on most badges, they are cast and molded parts, with blended parts with filets and rounds thru-out the design, and this was the route that they wated to go.

I had developed a quick technique to do this using the Pro-Boolean in 3DS max, and this technique is dependent on that Plug-In as it can output the file in a Quad" format so that the faces come subdivided and ready to go for the most part.

Once the Pro-boolean was completed I added two bend commands to dish the badge, as all badges are not quite flat but are dished and bent to conform to the human body better, so I applied this onto the mesh output then subdivided the final. I added in the skull with police hat, as well as a pair of firearms[ I had not built the special gun from the film yet, and would have replaced it with them if this did go to a finish].

A super fun concept to flesh out.