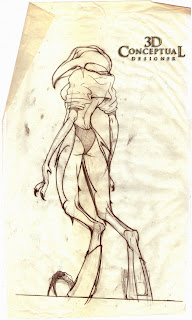 I've posted a 3/4 front sketch I did here, but this is an overlay/underlay drawing I did as I created the character turnarounds to another one of Nicks great characters. 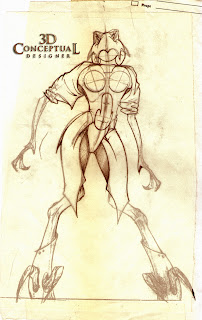 A front view with underlay and tighter color-erase clean up on top.

This is a rear view of the "General" from Flash Gordon, designed by Nick as well, so I did the turnarounds and the inks.

Here is a back view of the daughter of Ming the Merciless Inked and ready to go. I posted the pencils here for this shot here.

This is my eighth installment on the work I performed on the Television Series, The New Adventures of Flash Gordon, for Hearst Animation Productions back in the mid 90's while I was overseeing the final episodes of The Phantom 2040 Animated Series finishing on up, and today I have posted images of Character Design Turnarounds to review.

Almost every designer is required at some point to take a design done by another artist, and to extrapolate information from it, and for these turnarounds, what I did was to take the great character designs that were given to us from concept artist Nick Pugh, and do the inks and the complete turnarounds for the animators, and storyboard artists in production.

As a side I always remind younger designers of the value of reverse engineering  views and details from another designer, and with this work it was very beneficial to get into Nicks proportions and shape language, as it helped me to break out of my own conventions and typical proportions that I use, and revise them with these.