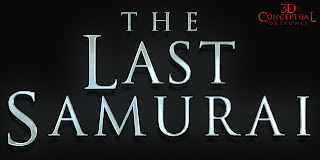 The Main Logo that finished was a single layer simple beveled logo for The Last Samurai. 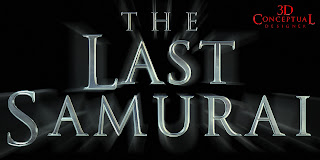 A Motion Blurred thicker beveled version of the title logo for Last Samurai.

An even thinner motion blurred version of the title. 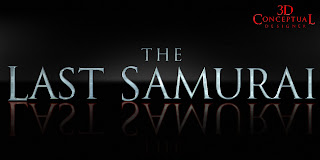 A blurred drop reflection in this style frame pass I did for The Last Samurai.

What finished for a series of TV spots had this back-lit motion graphic piece that I provided a 100 frame light move on the text and supplied the TGA frames to Alen to spice up in AE.

I rendered this at 9000 pixels wide as in Motion Graphics they did a close up move on the metal so I over rendered it up above UHDTV.

Here is a Samurai Sword I animated to cut from scene to scene in a trailer version we delivered.


When I was in-house at BLT and Associates I primarily provided 3D Illustration services, but I did do an occasional Motion Grpahics piece for the head of that department, Alen Petkovic, and for The Last Samurai I provided work for both print and AV.

The Logo was designed and locked when we got it from print, so all we did was to play with bevels lighting and how the mteal would look.

I also was tasked with doing the Japanese character as a light pass animation for the trailers as well. I also did a samurai sword blade that was a cut element in the trailers too, that you can see the style frame I presented above shows.

Once I left BLT I ended up working on about 80 finished trailers doing 3D motion Graphics work, though I promarily do print I still get a request for a 3D graphic card here and there, you can view my reel link to the right.