Early on  for Buzz Lightyear Planet Rescue, I created test sets to ensure that the 2D printed artwork would cover the monitors placed behind the flats. The red-lines were from the Architect to give scale for the 3D renders. I did two full rounds of designs, starting with the look developed a decade back in Toy Story I with the Zorg-Bot, and a second pass that went to finish with a more contemporary 'stealth' flat edge look update developed by Scot Drake. 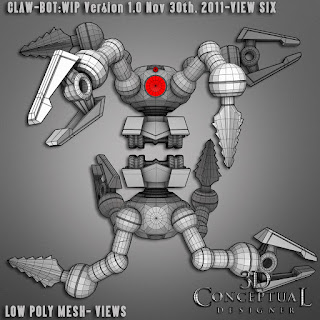 When I delivered the 3D assets I did Base Quad Subdivision renders along with smoothed ones, because I was responsible for the Advanced Surfacing and the rendering was done by the in-house 3D team. 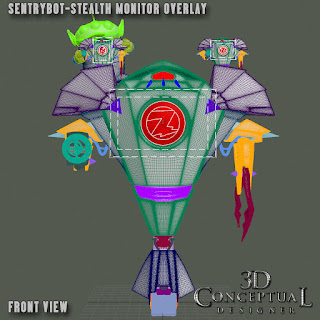 Here is a screen grab for a final set piece that shows the monitor fitment as this is an interactive attraction, and the hardware needed to be fully hidden by the flats. 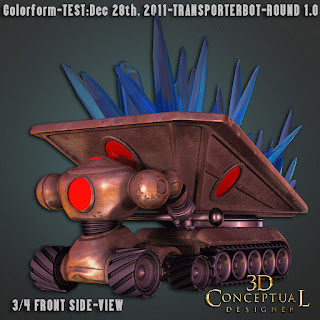 One of Christopher Lee's Transport design Bots, fleshed out in 3D. I also did a few texture tests early on like this one, as we were testing the Black Light throughout the project as I was there. 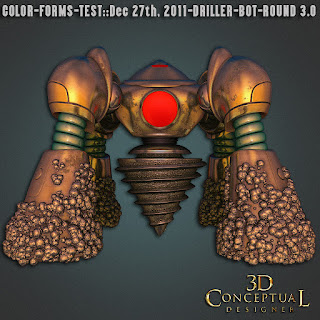 One of my favorite designs to build was the driller bot,and this was testing some weathering on the 3D Model of the Character I built in 3DS Max. 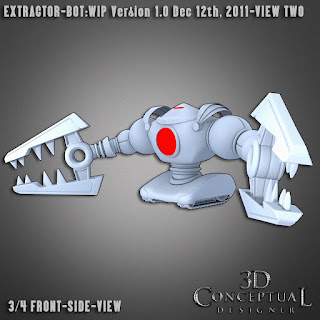 A Phase One Extractor Bot with Sub-D ON: This was based on the Round Zorg-Bot found in the original Film, expertly designed by Christopher Lee. 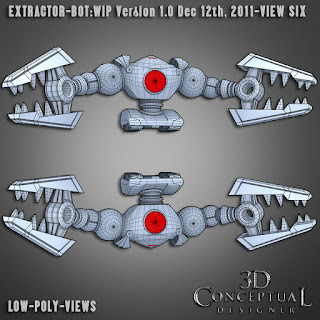 The base mesh with Sub-Division removed and mirrored to show front and back sculpting for in-house critique and adjustments. 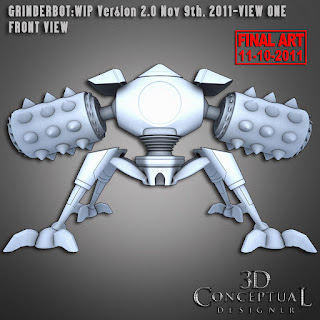 A Final 3D Character Design of the Grinder-Bot used in the first set mock up seen at the top of the post. 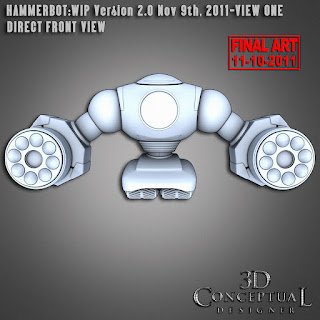 Here is the base Quad build out showing all six sides of the 3D Robot Character Model.

Today I am posting my 3D Visual Development work I did at Walt Disney Imagineering back in 2011 for the Shanghai China theme park attraction, "Buzz Lightyear Planet Rescue", based upon the Pixar Toy Story property.

I was brought onto the team for about 8 months, to assist the Design Team in 3D development of the 3D Robots and 3D Characters for the attraction that they were developing a look. Scot Drake was the Creative Director for the project, and I worked directly with the Chief Show Designer Christopher Lee, both are very talented fellow ACCD Alumni.

The initial job consisted of developing 3D versions of the concepts that Christopher had come up with to populate the attraction. Final application would be high resolution prints in color that would be reactive to black light.

Today is PART I in a series on this work showing a sampling of the over 500 robots I built out for the attraction in 3D, that were used in the final product currently live in Shanghai.

I will post additional PART's to this series in the future. Truly a dream job for me, and my last Imagineering job before relocating out of the area.

If you need 3D Character Visual Development / Conceptual designs, or a 3D Models built of your design, do not hesitate to contact me for a bid. Available for Freelance to Full-Time.