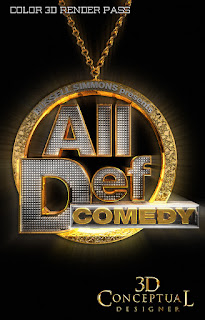 The first Pendant render of the 3D Logo I did for the HBO All Def Comedy Jam. 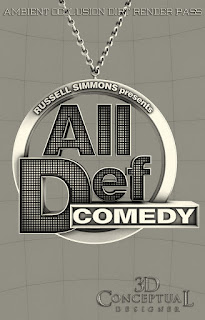 I did a second pass of an ambient occlusion render that is overlaid in the final PSD file I deliver to the in-house Art Department. 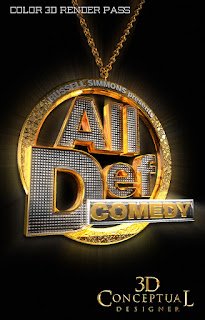 The angle view on the 3D Pendant Logo.
3D logos allow for multiple angles and views using the same asset, a distinct advantage over a 2D Logo. 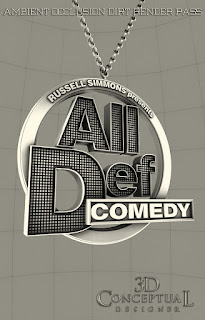 The Ambient overlay showing the reflection sphere I have hidden in the render to fine tune the metal brightness on black. 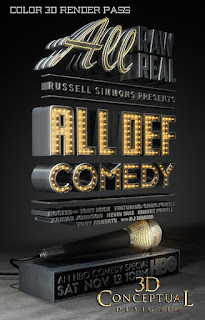 This was the final pass at the stacked Comp. I put all three light effects into one comp, the 3D Neon tube, the round bulb type, and the inner volumetric glow inside the microphone head. 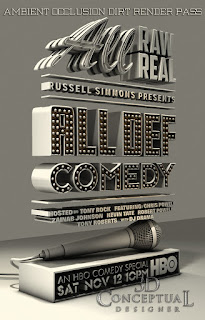 Here is the Second Pass render of the Ambient/Dirt shader overlay. 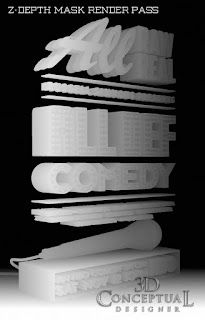 I also provide a distance based mask, or a Z-Depth Pass, for these renders so focal length effects and saturation based on distance is already masked out for the Art Team that takes this and integrates the 3D Logo into the final product. 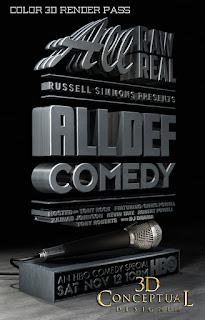 The first alt was no light effects just metals and a dark look. 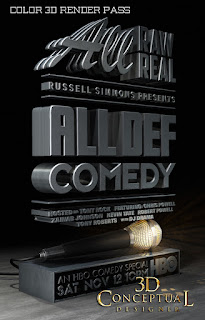 I then added a volumetric light casting rays out from indie the Microphone next. 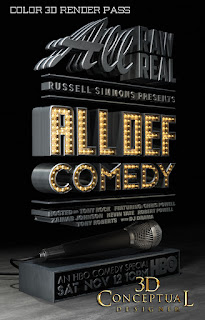 Here is the alt with the vintage round bulb marque feel to it.


Last Fall I worked on some 3D concepts for Key Art for the new All Def Comedy Jam 2016 for HB via the Leroy and Rose Agency out in California.

I was given two basic directions, one of a big gold pendant utilizing the circle logo provided to me by L&R, and another of a stacked black on black logo dark with some gold and light accents.

I started with the pendant concept first, as directed, and built out the 3D Logo and set up the textures and lighting. I have done many 3D Pendant logos in the past[ Goldmember, Marci-X etc.] so I utilized what was learned from those in this one as well. I did two views which is why 3D is so beneficial when the client wants alternates[ or Alt's] , since I just create another camera view, adjust lights as needed, and render a second concept based off the cost of the first.

The second direction is what took the most of my time, a stacked dark metal on dark metal logo with gold accents. Once I had the majority of the scene built, I rendered it out in various ways as seen above. The final was a comp with light bulb text, neon tubes, and a lit up microphone mesh all in one.

Though these did not finish[ make to the finals], it was a great exploration and application of technique for proof of concept.

If you need a 3D assist on a 3D Logo for your project, contact me for a quote today!