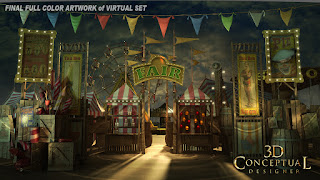 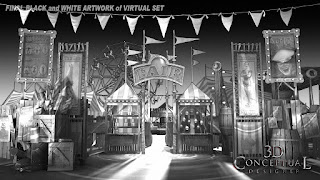 I did a black and white version as well 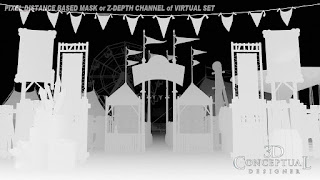 I provide a Z-Depth mask for Distance based editing. 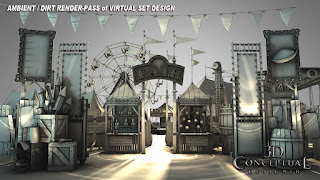 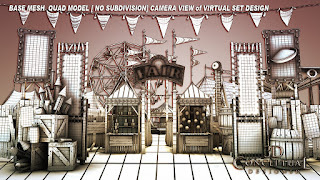 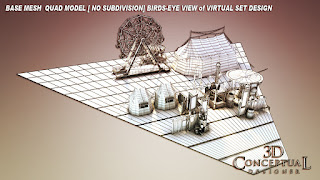 A Birds-eye show all objects in the scene built with a forced perspective I learned when I did Set Design right out of Art Center. 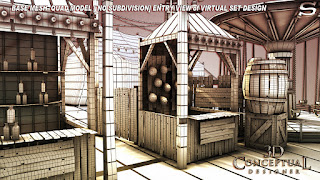 Details in the front booths on the sides of the gates without Sub-D added. 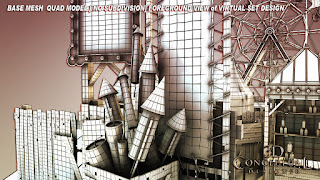 Close up[Base Geometry] of the fireworks and various signage out front. 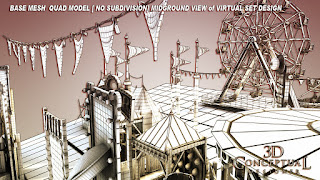 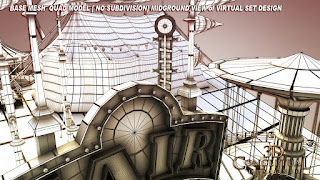 Here is a elevated shot of the base 3D Model showing the Middle Ground elements with the tent in the background.

I started out my career in Set Design fresh out of ACCD in 92',and have been doing Themed Entertainment projects ever since, so I was contacted by Marshall at Fee/Hedrick to develop a few projects for them,and this was the first, a 3D Virtual Set that would be used on a Video Wall behind a Stage Play Diner Theater in Pigeon Forge.

I was provided a concept sketch by the client that they wanted translated into a 3D Virtual Set, so I got direction as to the final look, and proceeded to block out the main elements.

Once we had a final look, I rendered out the image for the video wall at HD in layers with 3D Foreground, 3D Middle-Ground, and 3D Background. The 3D assets I created were then handed over to Dean Fowler to animate them for the projection on stage as well.

Virtual Sets like these are a fraction of the cost to create a real set piece, and the design can be dimentionalized if needed via 3D Printing or good old fashioned Set Construction.

This is first in a series for work done for Fee Hedrick.

If you need assistance with Diner Theater Set Designs on a freelance to Full-Time basis contact me for an estimate.