Project Review: Behind the Candelabra[Liberace] 2008- PART I The X-Ray Piano. 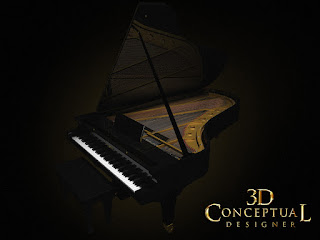 The main "Hero" render was done in traditional black and all glass crystal. 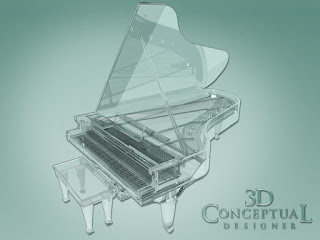 A Liberace Baldwin done in all crystal. 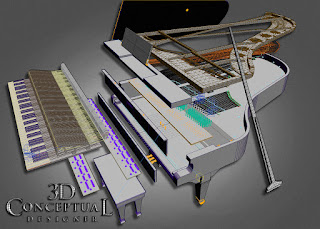 Here is an exploded view showcasing all the basic parts and wireframe. 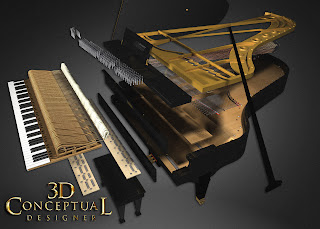 A similar parts view render of the Grand Baldwin Piano I made in 3DSmax in basic materials. 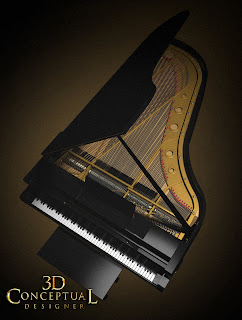 A Birds Eye overhead view of the piano. 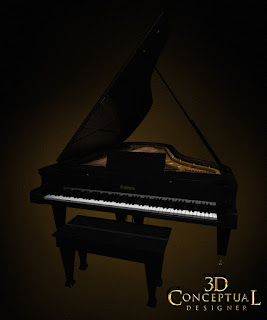 A Behind the player view of the Ivory. 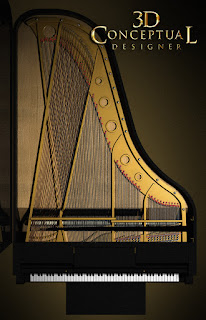 I did a few graphic orthographic renders for some comps as well, this was with the lid open exposing the full build-out if the strings and frame inside. 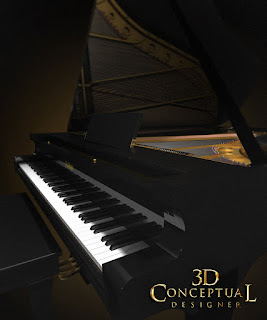 A close up down the keys on this Virtual Grand Baldwin. 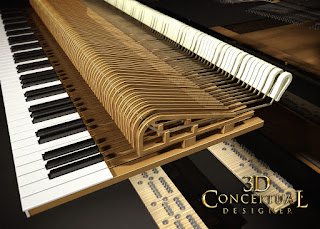 A close up of the construction details with pads, wires retainers, and key mechanicals. FUN stuff! 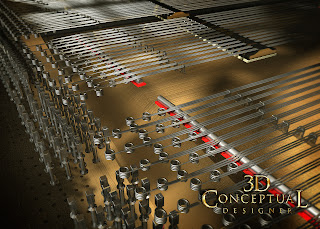 An exploded close up showing the wires off the posts fully wrapped around with the felt supports below. 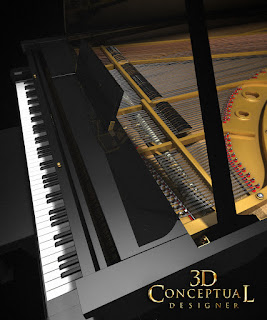 Another angle on the piano for a comp for Behind the Candelabra.

Project Review
Behind the Candelabra[Liberace] 2008
PART I The X-Ray Piano.


Back in the late Fall of 2008 the Theatrical Print Division @ Cimarron wanted to do a pitch for the new Liberace Film being considered, "Behind the Candelabra", and what I was asked to build out besides the 3D Logos, was to construct a fully detailed model of the Grand Baldwin Piano used by Liberace. They also wanted to do some versions in crystal[ glass] and a regular black on black look, but they wanted it to show all the parts inside, so that meant a full X-Ray model build out, not just a shell model.

An X-Ray model is one which you build out all internal parts anticipating the fact that they will be seen, and being this is a crystal piano we'd see all the internals. I did this in the past here, and here, and since they had seen my PPK I did for Bond they wanted to do the same for this with my 3D Illustrations.

I referenced the Baldwins Liberace played and I began to create the parts inside bit by bit. As a trained Industrial Designer over half of what I do is a form of reverse engineering as I must create the parts to look relativly functional, so I must have some understanding of how the part functions so I study cut away diagrams, and How it is made books. It heped that I have a vintage upright at home so I could lift the lid and take a look up close here as well.

What you see are the various 3D Renders I provided for the comp presentations with the Baldwin.

I will be posting the 3D logos in a future post.