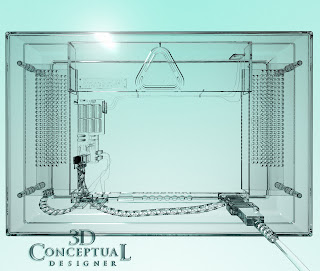 Here is the final glass render of the flat-screen monitor I built out for the Key Art for the film The Final Cut back in 2003. 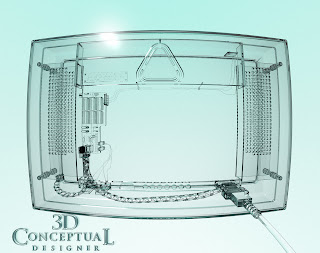 I also rendered it out with some fish eye on the lens. I am a fan of curvilinear perspective so the fish eye lens is something I always love to try on a project. 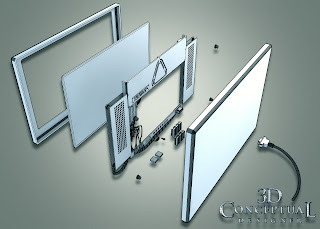 An exploded view of the virtual flat screen I made with all the bits separated out to see. 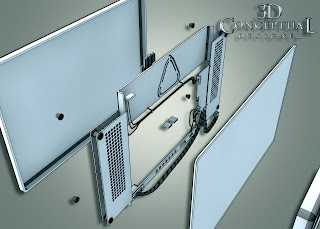 A closer reverse shot showing the LED flat screen element out front there. 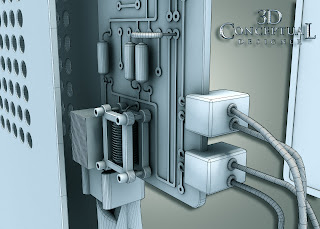 Close up details on the little motherboard I made inside. 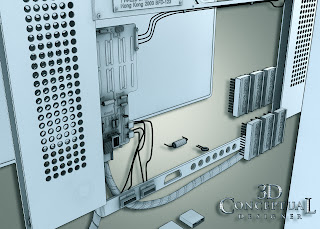 Here is that same area a bit pulled back to show the various conductors and chips I made to fill the 3D circuits to show off on the lower edges for this X-Ray render.

Today for my Monday 3D posting, I have some Key Art 3D Illustrations that I did for the film, The Final Cut. This was a very early project that I did for a direct to video release for the film starring Robin Williams back in 2004.

I had done a gun made out of transparent material[ Glass/Ice etc.] for a prior project over at BLT and Associates here, and they loved the look I had, so the idea for the Key art was to have Robin looking at camera as if he is editing and that the monitor was done in this transparent look to overlay over the top of the comp.

The finals looked great thought they changed the Key-Art at the last moment[ typical], and this never finished. This type of solve is truly where 3D sings, as you can render anything in most any material you can think of, so a glass flat screen was straight forward to do.

For the build, I went to the IT guys at Cimarron, and they had an old flat screen that was opened up so I reviewed the parts inside took a few shots, and built out what you see above as an all X-Ray model.

An X-Ray model takes more time since it is an inside and outside model with most parts all modeled out, and since this was rendered out as glass, you must build it this way from the start, and factor the cost to the client as well.

A fun project to do, even though it did not finish.