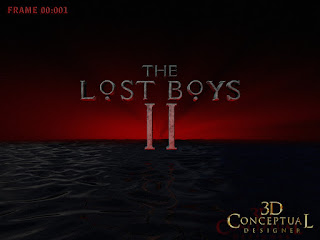 3D Double-Stacked Type over a body of water with a blood red volumetric light from behind, FRAME 001 fro The Lost Boys II: The Tribe. 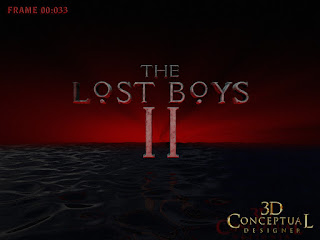 Water object animates so play the type reflections well as we drift into frame. 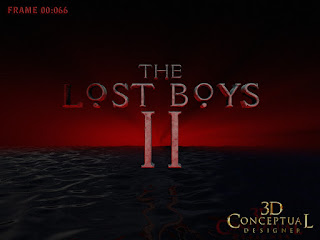 By FRAME 00:066 the lighting in red is dialing way up  as we close in on the final logo. 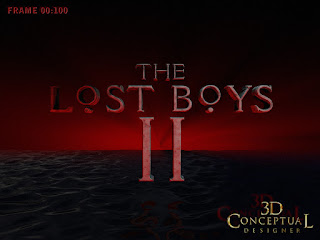 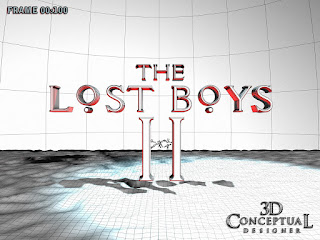 Here are the wire frames for the scene, a basic set up with a reflection sphere, the water plane, and the type. I also duplicated out the type and floated it over the volumetric to get secondary effects in the animation. 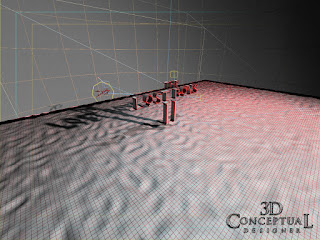 The 3D Animation scene from overhead showing the lighting and camera set up as well.


Back in 07' I was in the middle of my six year stint in house at The Cimarron Group in Hollywood running my little "One Man 3D Army" in my 3D Design Department, and I was asked to quickly get a main title to Eric Powell as he was editing the TV spots for the sequel to the popular 80's film The Lost Boys. We would regularly work on projects that we were not assigned to to attempt to get work from studios, this is a standard practice for agency's in Hollywood to generate business, so this was my contribution.

Usually a job like this goes directly to the Motion Graphics Department in AV, but they were swamped at the time, and could not accommodate Eric, and I had down time in 3D,  so I did a full 3D 100 frame animation that I had about 3 Hrs total to design, build, and render out 100 HD frames for the spot and this is what I got into the piece.

No time for post FX or anything so it was all in the RAW 3D TGA frames I delivered to the editor. A fast fun little gig that became a good exercise for a fast 3D turn around work flow w/o MGFX if we needed to do this again. I also got to do some water animation as the title drifts to camera and that is something I've done a few times now.[ see Battleship]

Though I have worked on well over 500 print posters, I also have over 80 MGFX[ motion-Graphics] finishes with 3D Animated titles for Theatrical Advertising, only now being freelance the need only arises every once in a blue moon, as my bread-n-butter is print 3D Illustration.