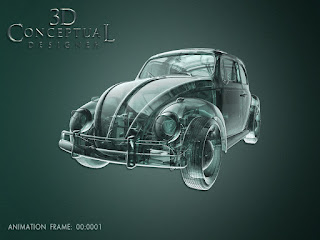 The same animation move is seen in my reel, here is frame one rendered out in a glass material. 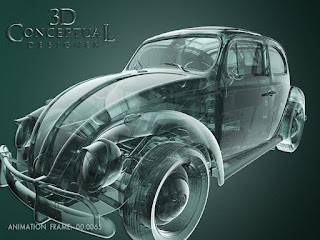 As we pass by we can see into the bonnet and the floor pan area. 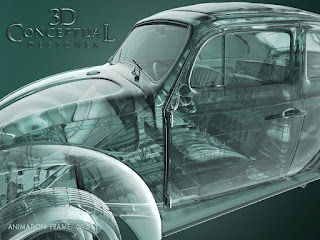 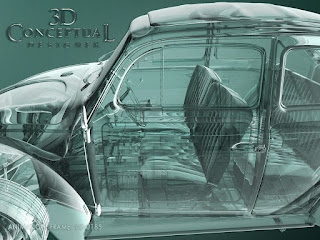 The side shot at the door. 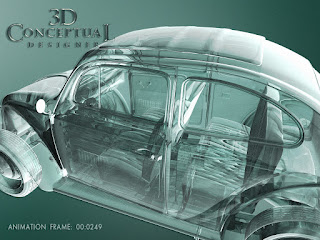 The final frame in this Motion Graphics piece. 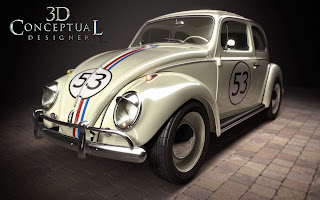 Here is a frame with the virtual 3D Herbie fully rendered out.

In this, my fifth posting on the work I did for the newer[ now old!] Herbie film starring Lindsey Lohan and Justin Long, today I've posted a look at a Motion Graphics [ MGFX] render pass that I planned to do in glass of that famous 1963 VW.

If you check out my reel on the link to the right you will see a transition we did for the Herbie from fully rendered to an X-ray type of material. Originally we planned to go glass so the team I worked with was familiar with the X-Ray PPK I did at BLT prior and wanted to see that look in motion.

However back in 2005 when I built this motion graphic piece the render times were not forgiving so it was deemed too long a render for the production. What is nice is I opened the scene in 3D Studio Max 2013, hit render and they went very fast as the software and hardware has advanced quite a bit in the last 8 years so I was done to 8 minutes a frame in glass at 3/4 HR rez.

X-Ray modeling is done when you know up front that you will see thru the objects so you build out everything internal and two sided, and for Herbie we had all sorts of plans to fly thru the tailpipe inside the engine and around the interior and speedometer.

I included the painted render pass as well as a reference for the transition.

My First four other posts on the VW build itself, are here, along with this and this,  and this.