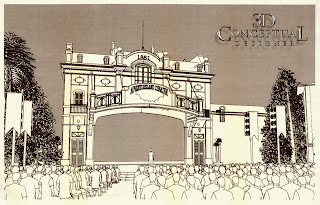 The 3D blocking model I built for the facelift on the Advertureland Theater from back in 1997. This was one of many views I ended up sketching over. 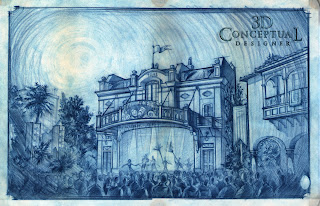 Here is the final blue-line sketch I did with Color-Erase, Prismacolor, and Indigo markers to scan for the final. 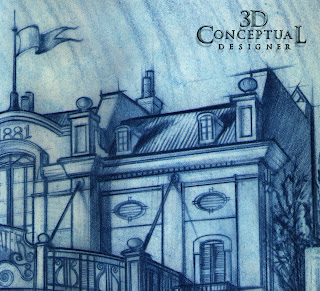 A close up on the details I put into the railings etc. 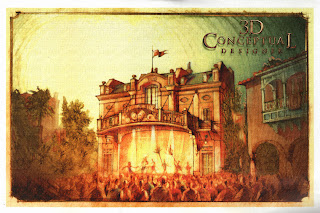 The final Photoshopped colorized version we presented and got the approval to go ahead on with.


While working at WDI in the mid 90's I was moved over to work on Tokyo Disneyland after I did a few years on the Second Gate at Paris, and one of the many projects I did some work on was a facelift on an exisiting building there , the Adventureland theater.

I blocked this all out in 3D first, as a 3D Perspective grid, since they wanted a few angles done on it and I suggested we spend a bit of time doing a blocking 3D model so I could sketch over it fast, and add in the all the tiny filigree and detailing needed to sell the remodel to the upper management.

So what you see above are three of the main steps involved. First I build out an accurate 3D model based on the CAD files provided to me by the architects. I then print it out and hand sketch over the top. I scan that into the PC, and take it into Photoshop to colorize and add in all painting technique for presentation.

Once I did this view I rendered out a few added views and sketched over those as well. We sold the idea, and the facelift was added in 98. Always a fun time at WDI back then.