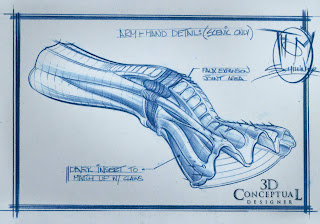 A detailed view of the Claw forearm design showing off the surface design for the builders in Florida. 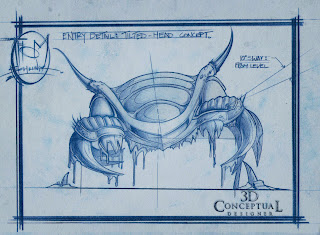 A Front View showing the head shell and the tilt that it would be set at for the final design. 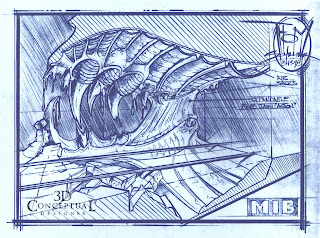 Inside the mouth was revised since we went with the throat design for the final so we moved the teeth up front on the attraction. 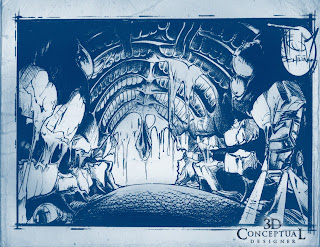 Here is the original Inside the mouth design I did first, with a Ford "POS" up front getting crushed by the teeth. The under Drawing I posted is here.

This is PART II in a small series that I have for some Conceptual Design work that I did for Universal Creative in the 90's for a Men in Black attraction at the Florida Park called, Alien Attack, which is now closed.

Today I have more parts drawings and detailed sections showing off the details in the design.

I found some added sketches for the design package I provided Dave Cobb who was producing the attraction for Universal , and I had worked with Dave over at Landmark Entertainment in the past so we had worked together on a few Themed projects, and that made this job, work like a clock.


They wanted what were termed, "Intent Design Sketches", that were to be accurate enough to show what we wanted the parts to look like, while allowing room to adjust the design in the field to conform to any mechanical issue that might arise , since the design I did was prior to the engineers adjustments since I was just freelancing the work and would not be around for construction.

The pack was a dozen or so drawings for the attraction that were done in a few weeks and I eventually moved on.

This was the last work I did the Universals Theme Park Division before the "Dot-Com" boom drew me in.

You can view PART I here, as well as I've posted some under drawing here, and here as well from the project.

Posted by 3Dconceptualdesigner at 5:27 PM