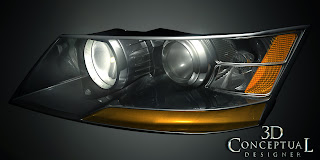 Here is the final Hyundai Sonata Headlight assembly Model as delivered for the project. 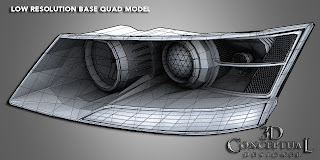 The base 3D Model for the headlight with subdivision removed. 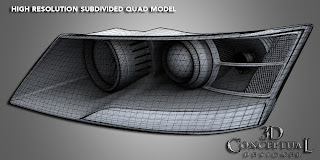 Here is the final smoothed 3D asset. I did not smooth the honeycomb reflector object as it was not needed. 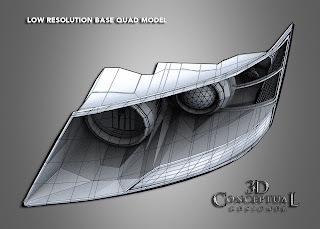 An overhead shot of the base model. 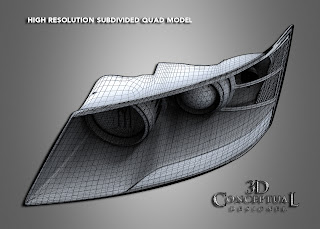 When I was in-house in Hollywood at The Cimarron Group, I was called down to 2HM[ Two-Headed Monster], to assist for two weeks in a Hyundai project where the virtual car models they received, were very problematic and required a good amount of full remodeling so that they could do the website configurations and the television spots with these virtual cars.

I had done a few automotive virtual car shoots for Herbie, Lotus, Honda, Mitsubishi, and for LandAirSea Designs before, as I hand built Herbie, the Lotus, and Marek Djordjevics Landairsea.com  Supercar from scratch myself, where the Honda and Mitsubishi were scanned in.

I also worked on site for the two weeks at 2HM, which was a very nice change up since at Cimarron I was  Department of one, and work was always drenched in solitude, so I got to sit with a big group of 3DS users which was very nice!

So for the first post in this work, I have a quick model I started with, which was to remake the complex headlight assembly for the Sonata model.

It was build all subdivision so they could Turbo smooth the object to get a perfect surface.

I will have added posts covering the body and interior work I did on various models since they did the whole 2009 Hyundai lineup I worked on over half the cars. Fun stuff!

Posted by 3Dconceptualdesigner at 7:16 PM