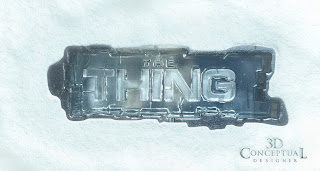 One of my favorite designs was this one in a pit in the ice sheets, with the snow around the edges Photoshoped to soften edges to save time so I "blocked in the snow" with a simple edge as seen here. 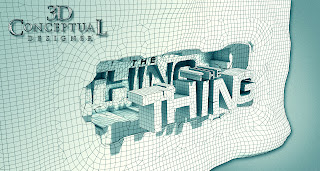 Here is the quad geometry view showing the three main objects. You can see the letter hole cut into the ice block for accurate refractions in the ice material.

This second design I did for The Thing, was the logo on a gloss black surface with Ice chips all around. I built the type soft with some melting, shifting the individual blocks a bit forward or tilted back for variety. 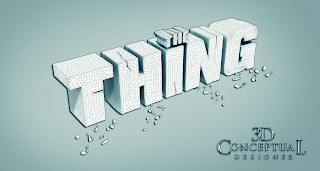 Here is the mesh view with the smooth on so you can see that I used a Pro-Boolean in 3DSmax to achieve the full quad division on the type so it would take the Global Illumination better. 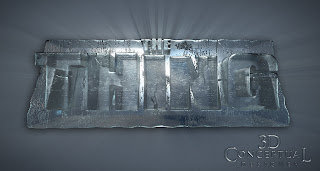 The last comp logo I did for The Thing was an angled block behind the type, but it was still imbedded into the block. I cut this out too, so you could see the back side blurred through the ice material. 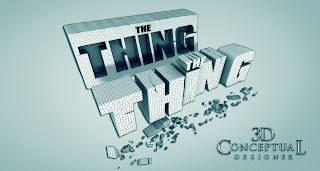 Here is that same scene from above exploded out to show the various parts.
[ the chips were deleted in the final]

A year back I did some a quick project with experimentation for some 3D Logos build or carved out from solid ICE for the remake or prequel The Thing.

The current film is a prequel to the 1985 film[ itself a re-make], and the 'Thing' itself in the film is found in a solid block of ice, so that was the basic theme for the type. A big block letter logo carved out of Ice or imbedded into an ice block.

I also included in this posting a quad view showing the parts I built, and I will note that when you make anything transparent, the more accurate you build it in 3D as a model[ no fakes], the better the render comes out. I made the text cuts in the ice and placed the type into a hole. Typically in 3D you just push the type into the back object, but being translucent, I wanted the render to look like ice in ice and have the proper refraction and reflections so I made them separate.

Cheers, THOM
Posted by 3Dconceptualdesigner at 10:14 AM