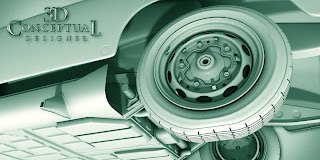 Here is a shot of the rear tire and Torsion tube end details near the rear wheel pan. 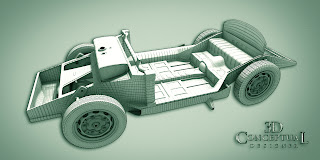 A smoothed shot of the full frame and pan unit that fits to the body.[ During the initial Design phase form the 356 Model, they drove this frame w/o a body! 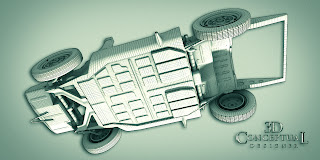 Here is a render showing the smoothed pan and sub-frame members as well as the front suspension torsion beam. 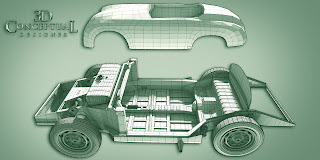 A shot of the placeholder body[ un-cut with built in pan] and the rolling frame up front. 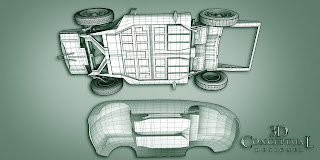 Here is a Low Poly[ mesh-smooth OFF] shot under the design. 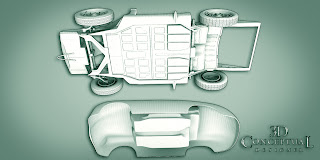 A smoothed version of the above camera angle. 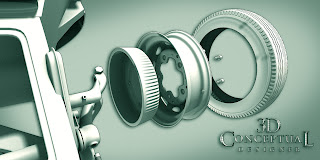 If you look closely you can see the finned brake drum on the 356 has an inside design surface[ inside-out modeling]. Models like this work amazing for X-ray renders as you build it all so it is the most accurate when it renders. 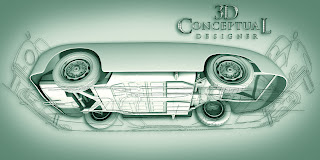 In this shot I lowered the 3D body onto the 3D frame and I also show the spline guides I  used to build over for proportioning.

I have not posted anything on this personal project for over a year, and though I have not proceeded with the Speedster full 3D virtual replica, I have this series of renders to show the model progress.

I am building this as a full inside out model, meaning every bolt and nut , and all sheet metal underneath the car will be accurate as well. Most 3D Automotive models "fake" the undercarriage, or at least simplify the details as most are just not needed. For this personal project my challenge is to build it like a real car, piece by piece.

I scoured the internet to find as many photos [ about 300 so far] of a 1955 Porsche taken apart being restored. If the parts are disassembled, I can easily see the design are extract it out and build the part as a virtual 3D piece.

The second part of this exercise is that in having to figure out each part, I am forced to learn the construction style used, I am force to figure it out, and that challenge is awesome as an Industrial Designer.

I am building this entirely as a subdivision model with a mesh-smooth added so it can be increased in resolution for the application of the model, as well as having a very complex model able to work in the view ports of most 3D programs, and also be able to up-rez for the renders.

I still in two years have not returned to the construction, but I thought I would post the full model since I have held it back since I started the blog, except for a few peeks, here, and here.

Cheers, THOM
Posted by 3Dconceptualdesigner at 10:27 AM