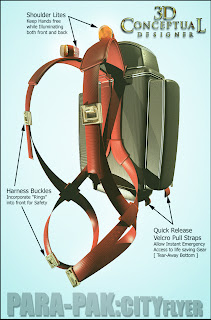 The PARA-PAK[ Pack] is an Emergency Parachute and Survival Kit that was developed after the World Trade Center Attacks in 2001 by myself For Rick Lynch. 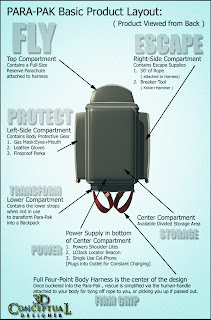 This second render from the back describes the various assets that the Para-Pak(R) has. 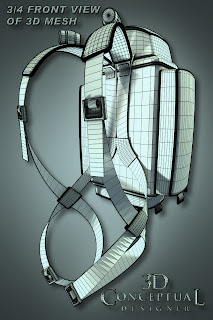 Here is a Polygon view showing the basic model I designed in 3D for this project. 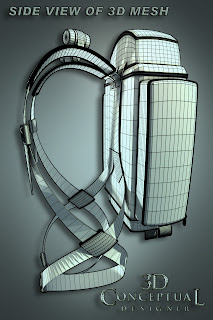 A 3/4 Side angle on the pack Polygon base design. 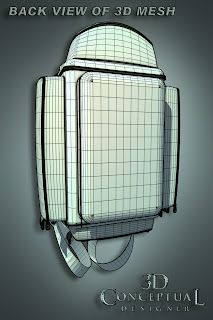 A Back View with the center open for daily items to function as a standard backpack. 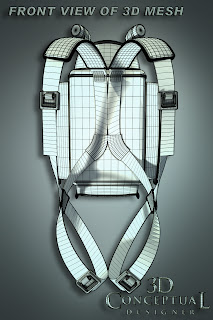 The Front-On view with the figure-eight twist in the arm to leg full body straps.

When I was full time at BLT and Associates in 01',  the workload was usually very full, but I always had a side project going on with the many ideas that were fed to me by Rick Lynch.

Rick is an Idea Machine, and he always had something brewing upstairs to be visualized, concepted and designed, so today I am showing a project I did for him back in September of 2001. It was right after the 911 attack happened, and he had an idea for a backpack that would double as a mini emergency chute, so I went to work on a design for him.

When I was younger, I was a Boy Scout, and I had put together survival bags so I had an idea of what I felt would be needed here for this design, and still be able to fit in the pack along with the mini parachute.

I added in a charging system so when you arrived at work you would 'Plug-In" the Para-Pack(R) and it would charge the emergency lighting, radio, and location GPS beacon inside, so it would always be ready.

I also made the full harness a part of the pack so if the person was unconsious, it could be used to pick him up alot easier in an emergency since it is a basic handle to grab or tie a rope or cable to for rescuers.
I have half a dozen Rick Lynch projects that I will post over the coming weeks, but you can review my last post with the Animated Series I visually developed for him, called The Frum-Unders, here.

Posted by 3Dconceptualdesigner at 9:57 PM