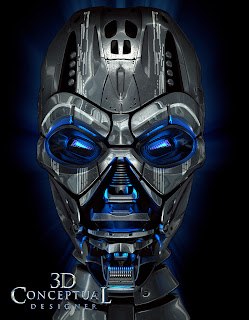 The final render I did for the Terminator Anthology Blue-Ray Box Set this Summer for Neuron Syndicate. 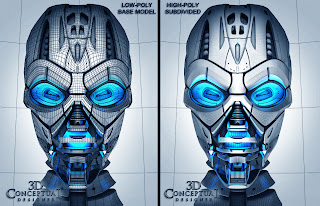 Here is the side by side of the base mesh[ low-poly] model, next to the final turbosmoothed one. 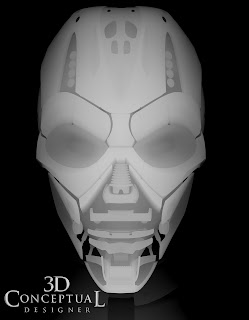 A Z-Depth Render-Pass can be requested so that the Artist can paint based on camera distance each pixel and every part in the build. 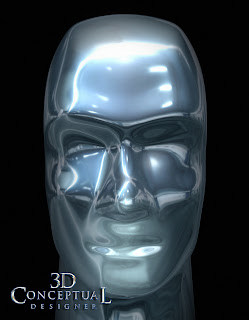 Here is the main final Terminator T-1000 Liquid Metal head shot for the Blue-Ray boxed set I did this Summer. 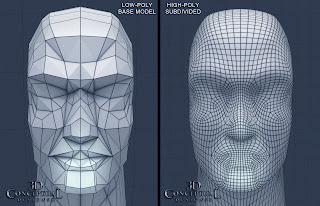 Here is the Side by side of the base model as well as the final smoothed one for the T2. 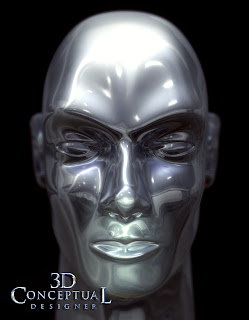 We also used parts of the detailed head as well so I rendered that full size for the finals too. 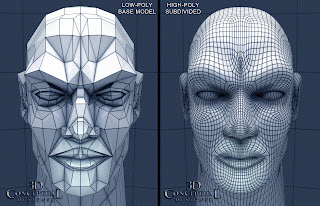 Here you can view the details for that side by side. 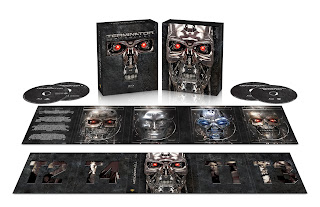 Here is the packaging shot[ HatTip to KeyArt Awards]

Neuron Syndicate is a new client that I did a really fun 3D Illustration job for this past year for the just released last month boxed set of all four Terminator films, now with all on Blue-ray and DVD, called, Terminator Anthology.

I was brought in to help with two of the four Terminator renders they used on the inside under each disc as seen above. I worked on specifically the liquid metal Terminator for T2, as well as the sexy Terminatrix from T3.

For the Terminatrix female Terminator, I found a model online, here to begin with to save time and $$$ for the client, and then I modified and rebuilt/modified it to get it closer to 'on-model' for the clients need. I added cut lines, holes,and details all over the face and added some generic pistons and gears inside the mouth area to fill in the gaps.

All new parts and modified parts were all done as Quad Subdivision surfaces so I could mesh-smooth them when I was done, to get a great molded part feel to the renders. I also hand built a few custom texture maps for the circuit etching on the chrome skull.

When I start with a model online I first strip all textures and go over all major parts to verify they are OK. I build all my own shaders, and I set up the lighting and mood for the file and render away to final.

The second piece was for T2, the head sculpts. It was a straight forward human face to do and I started with a bit too much detail at first with nostrils and defined eyes, lips and ears, so I went back and smoothed out some of the features to match the film asset from 1991, as it was a lot less detailed.

It finished out for printing, and was entered into this years Key-Art Awards, though sadly it did not place for the category. A fun project!

Posted by 3Dconceptualdesigner at 4:20 PM