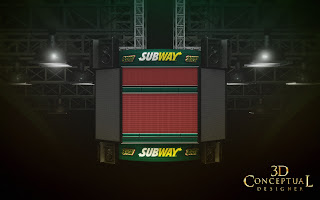 Here is the final shot of the main scoreboard I built out for the Subway online game in 2009. 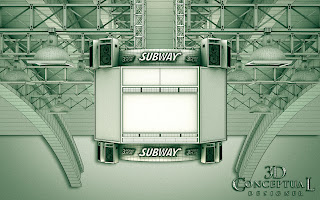 Here is the geometry view showing the details I built out in the various props in the scene. 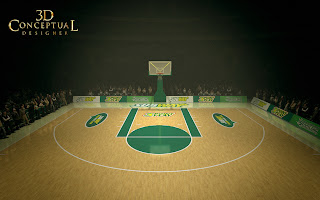 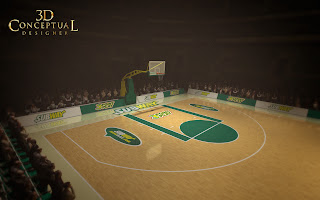 A low side angle screen for the game for Subway online. 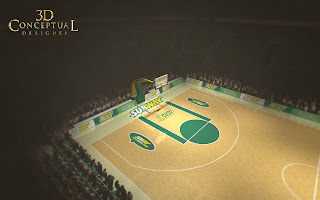 A high angle on the basket form way up high in the sports dome.

During my last years running the tiny 3D department in-house at The Cimarron Group, a client I had done Gameshow Key Art for, came to me with an online game for Subway, that needed 3D Illustrations for the game assets, so I was hired to create these HD screens for the online promotion.
The stadium and crowd were sourced out over at Turbo-Squid to same time, and I re-lit, and textured the scenes in Final Render, and built out custom floor and banner ad graphics as directed by the client. I also hand built the Jumbo-tron, a big LED screen scoreboard model used for the game close-up's.

I like to build all models for the scenes I do myself, but it is sometimes best to use stock models for the lower end jobs with limited budgets. If the models are built right[ the most important part] you can always make the textures and lighting better[ which is how many buy 3D scenes based on the render alone]. We builders look at the topology, or who the model was built, to see if there will arise any issues with GI etc with face issues.

Cheers, THOM
Posted by 3Dconceptualdesigner at 11:49 AM