A dark procedural texture I built in Dark-Tree and rendered using the free Simboit Max Plug-In in Final Render SE3 is applied to the title for Alien versus Predator, Requiem.

Here is a brighter alt of the Alines vs Predators 3D Logo, with brushed metal and some Final Render Dirt shaders applied. 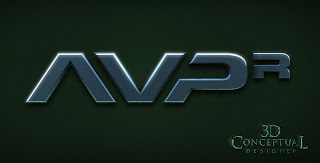 Here is the shorter AVPr Icon we did in the brushed metal as well. 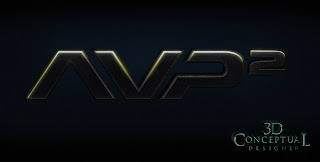 I love this one; Simple and still reads. A dark look was what we hoped they would pick
[ They never do!] 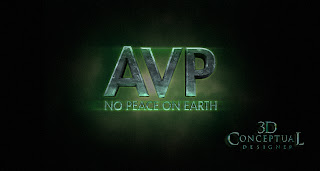 This look did go a few rounds with a lot of MFGX post work done behind the 3D logos I designed and built for Motion Graphics.

Today for my 3D posting I have put up a few 3D Logo styles I designed as I was tasked with providing to the Motion Graphic department at The Cimarron Group while I was an in-house 3D Design Department there from 03- to 09 in Hollywood.

Basic and simple stuff for the most part, with some fun dark edge lit stuff that for the animations, they looked great from black to just the edges. I did a few back-lit with a green tint as directed. A full title and the famous AVPr were both hit in a variety of looks and these are what was presented from me, along with a few others. Enjoy the posting.

Posted by 3Dconceptualdesigner at 3:45 PM