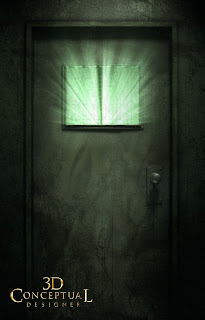 The final Main Shot of the Padded Cell Door, I designed and rendered out in 3DSmax for the film advertising for Wes Cravens They, from back in 2002. 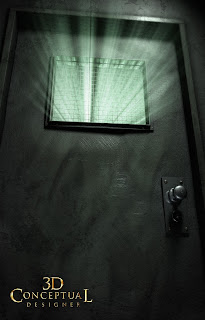 A lowered camera with a bit of an angle on the door way. Also desaturated the lighting. 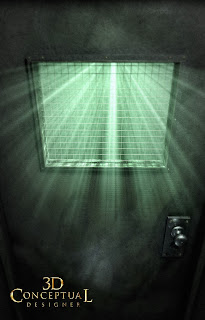 A virtual set affords as many rendered camera views as you want to buy, the set is done and easily is shown from a multitude of views to fine tune any comp at the design phase, which photography will not afford unless the set is hot and the AD is there. 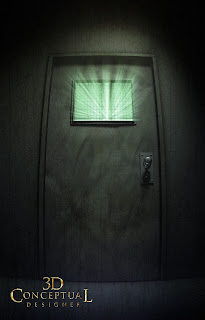 A love a fun fish-eye drawing and rendering so had to do a few with a 15 degree curve to the camera. 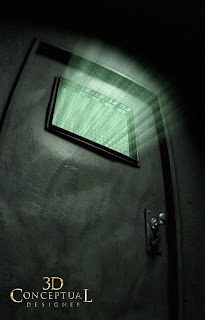 The most dramatic low angle I rendered for the project. 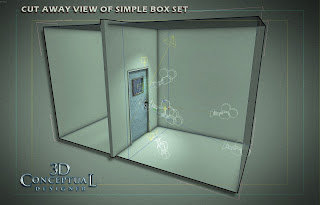 A Cut-Away shot of the box set I created wit the inner cell with the light source.[ At one point I almost built out the padded cell interior.-FUN!] 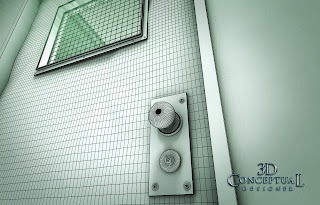 A polygon shot of the door know, and key in the door.


Over a decade back now when I was still in-house at BLT in Hollywood I would regularly create 3D Illustrations for the various "Pods" or art teams for the presentations for theatrical print, or movie posters. And today I am covering the film They, a Wes Craven Horror film that they wanted a doorway with an institutional feel created in 3D for poster illustrations, as if we are looking into a padded cell. So wire in the window with a metal frame was decided, with the main door a bit dented up, with a dark ominous feel to the lighting and mood.

Also they wanted the colors of greens and blues to be dominant with some yellows so I added in the volumetric lighting to color the shots as the film was toned that way and they wanted the marketing to play off the then very popular "Matrix Green Effect" as we called it.

I built the 3D Virtual Set out as a very simple box[ six wall ] set and rendered out the various angles from front, to fish-eye, for the various ideas presented. A fun one day gig where 3D is a great tool to get multiple views quickly and without any release of rights issue facing stock or custom photography.

Cheers, THOM
Posted by 3Dconceptualdesigner at 11:25 AM