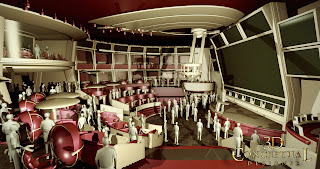 The final shot rendered out over a decade back for the Blockbuster VR Pavilion Concept. 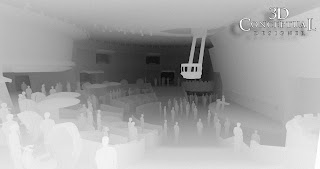 A Z-Depth pass so post work is easier was also generated. Grey scale is based on camera distance so Tilt-Shift and other FX can be added in PSD. 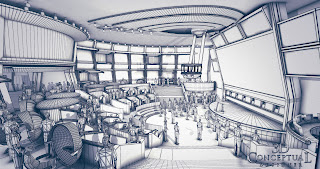 The Mesh of the scene is all medium to higher rez, no quad-modeling back in 2001 for me yet. 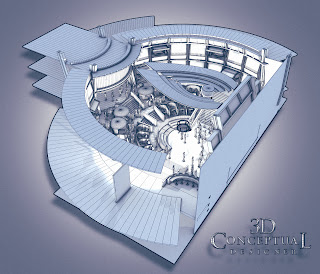 A birds Eye view outside the Themed Attraction Pavilion[ with the roof hidden] to show the extent of the build. 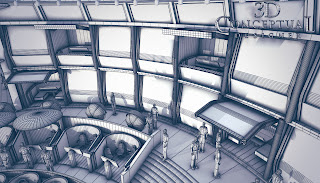 A  close up shot of the balcony rooms with glass swing up enclosures.


Over a decade back in 2000, I did my first Theme park design project with all designwork done in 3D for WDI on the Millenium Village Scotland Exhibit back right before Y2K. 3D was just getting good for projects like this so I jumped in.

So a year later, I was reconnecting with Luc Mayrand, whom I worked at both Landmark Entertainment, and Walt Disney Imagineering with, and he wanted me to block out his design sketch in 3D to help assist the pitch for the project.

I built out the 3D room and we did about 30 rounds back and fourth until the design was locked. I then rendered out a large 3000 pixel wide shot which back then was a good 7 hour render to do.

This is why we went without full textures as this was a design pitch concept so the money would come later on if it was approved to go.

Sadly it was scrapped, but a fun project none the less, and it was a foreshadow of a whole lot of what I have done since then using 3D as a great 3D Design tool.

Posted by 3Dconceptualdesigner at 5:48 PM