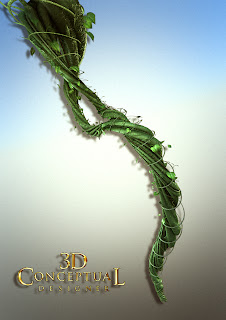 The very first beanstalk I did back in the Summer of 2011 for Jack the Giant Slayer went to finish here. 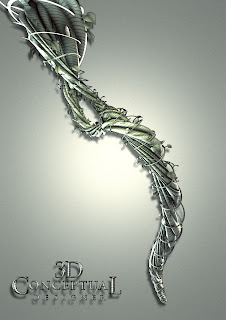 Here is a render showing the geometry to see my build-out. 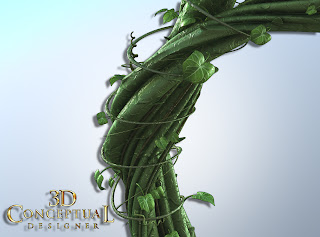 This was taken from the above comp zoomed into, and subdivided as it was a close up render done at about 8000 pixels wide and it too was used in the finals here. 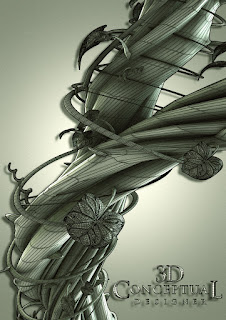 This close-up render shows that I built the big leaves as geometry not a bump map fake. I wanted good light play on the edges and nothing beats real dimensional geometry for that in a high resolution 3D illustration for Advertising. 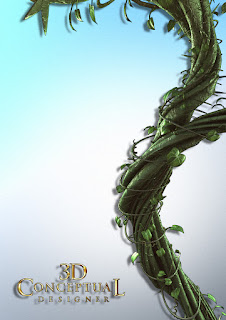 This fun render has a classic "S-Curve" design to the vine so the main character could stand on the hump out in the middle of the comp. 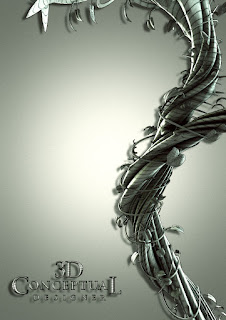 The Quad Polygon view shows the details for this S-curve shot. 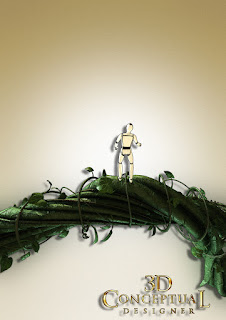 A vine bridge idea with the placeholder dummy used for scale and shadow, that was removed and replaced with principal photography for the finals.

Here I show the base mesh with subdivision off, a complicated build but so fun to sculpt out.


I had the pleasure of working on the recent Key Art for the new film Jack the Giant Slayer, and today I will cover the finished 3D Illustration work that I contributed to the finals for the Agency Cold Open. Thanks go out to this very creative agency, as I have been able to get onto these great projects over the last few years.

Apart from the standard 3D logos I do for many of my clients, I also get the chance to do these detailed props and environments from the films I help with in advertising, and with 'Jack-TGS', I was asked to help with the beanstalks for all the One-Sheet ideas, as the film was still in production back in 2011 when  I did my first rendering of the vines for them, since they did not have a single high resolution still to work with.

Building out the beanstalk was a fun modeling challenge, and as with most poster projects, I have an extremely limited time frame to work with. This point is something inexperience fails to see, in that when someone looks at a final rendered 3D image they divorce it from the context in which it was created. I often here a rogue critique[ see #5] as if I had the same time that the film makers had to build and develop the look of the prop, yet I usually have about 1/10th the time at best.

I had one eight hour day to reverse engineer, build, texture, light and render multiple images with revisions, and this is where being a 3D Designer rather than a "3D Carpenter"  makes all the difference in the world to the client.

This project spanned three years of work, and a few versions of 3DS-max[ 2010, 2013] so I had to re-link and revise the files in production. This is also a real work situation that many years of 3D illustration afford you to keep the client in the know as to the bumps in production.

Case in Point: For a short while, my main procedural plug-in was still being upgraded, so I had to keep an older PC all set-up with my 3ds-max2010 still up and ready to go just for this project since it kept coming back, even though I was in 2013 on all other projects.


As a side-note I had experience with twisted vines back when I was the Art Director on the TV animated series The Phantom 2040, and here is an early design sketch with some similarities.

A fun project, and this is just the first post in the series.