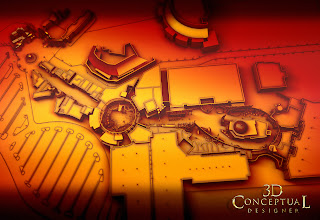 An overhead shot of the full 3D Model I built of the City Walk Mall at Universal Studios Hollywood back in 2004. 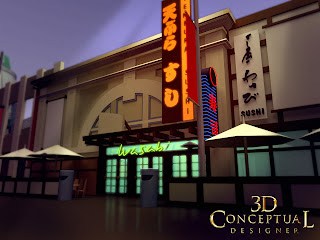 A ground level shot of "Wasabi" a sushi restaurant that I blocked out. 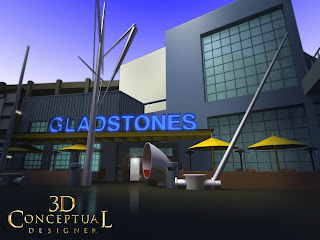 A shot next door at Gladstones Seafood. 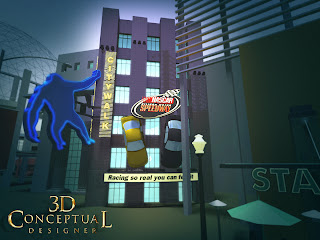 The King Kong Icon across from the two above restaurants is seen here with the Nascar building. 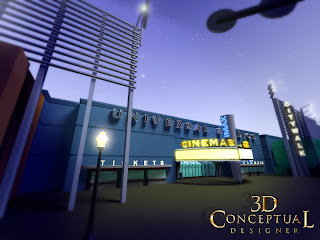 Here is a a shot at the main Cinema there.


When I was an in-house 3D Design Director at The Cimarron Group from 2003-2009, I regularly provided 3D design and animation for the corporate divisions big client, Universal Studios, and today I've posted PART I on the work I did on the virtual map of the City Walk Mall.

The concept started as a simple 3D blocked model of the whole outdoor mall that we could use as stylized images for the various locations at this themed mall next to the Park. Soon we discussed a interactive element with a virtual map of the mall that could help folks explore the mall before they came out to visit it to get familiar with the layout and offers there.

I built it out in stages with a full architectural model of the entire mall, as well as parking structures, the grounds around the mall, as well as the park entrance itself. Today I have posted four of the over tow dozen locations I made.

The design is simple with the attention in the 3D Signage and logos to help with the fact that this was a virtual 3D map. I will be posting added shots from the various locations in the weeks to come.

A fun project that was eventually replaced with photography in the end, but a fun exercise and concept.

As a side note I worked on one of the Themed stores that used to be there "Out Takes", and you can view those here.